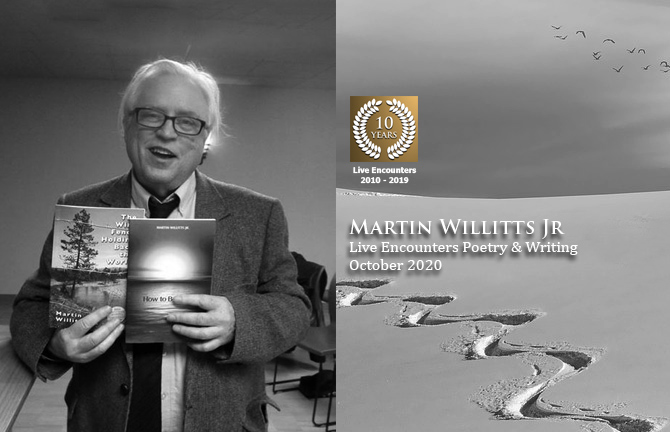 Martin Willitts Jr has 25 chapbooks including the Turtle Island Quarterly Editor’s Choice Award, “The Wire Fence Holding Back the World” (Flowstone Press, 2017), plus 20 full-length collections including the Blue Light Award 2019, “The Temporary World”. His recent book is “Unfolding Towards Love” (Wipf and Stock, 2020).

This is What Happened Next

I saw this parting in my father’s eyes when he died.
His body entered the surgical slice of air,
his desperate flight was the instrument of love,
the soul exiting the body.

A startle of geese needled through sky
and the arc of light,
splitting air so others can follow
and never tire.

Tell me death does not have an agenda.
Tell me life is more than a mere blink.
Tell me loss and love
are on the same curve of existence,
merging with light and dark.

When my father died, I assume it was Fall.
Geese were looping. It was dark early outside.
Then in a gasp, the length of a shadow,
the geese struggled, my father struggled,

light struggled to cross the street, I struggled
to hold it all together — wind; geese;
light; my father’s breath —

I went home. The roads were slick.
It was dark when I started home.
It was light before I knew it.

Grandmother’s Handmade Nightgown
Comes Out of the Cedar Chest

green mint before it made a tasseled flower

Music Shifts Though Us Long After It Is Finished


Songbirds do this without asking,
without permission, whether or not
we request this music.

I was looking for a familiar name
among the gravestones,
vandalized, cracked, disheveled.
Some stones wore rubbed-away names.
Some had a cross pointing accusingly.
One grave had a headless angel
proclaiming Beloved, readying to fly away.
I was looking for ancestors I’d never met.
I only held the fragment of their names.
I did not know what I would find
among the dandelions, overgrown weeds,
savage grass. Songbirds were singing anyway.


What did I expect to find? Some trace of my past
among the cobwebs stitching the smashed stones?
Beloved was forgotten, long ago. No one cared.

I almost missed their names and went back three paces.
There they were — whatever was left of them.
I would be in the same situation in the future.
I asked if they minded if no one would carry their name.
I didn’t hear whatever I needed to hear.

I walked back the silence, the held sacred breath,
turned on the car, wipers, hesitating radio station,
and drove with headlights pointing away,
leaving the birds to their task of singing.

A Tinge of Chill in the Air

The solstice brings its drenching rains,
indicating it will become chilly from now
until next solstice. Every plant slows down
into stillness, surrendering leaves and petals,
casting their good fortune aside.

It will be barren soon. Time will drag its feet.
I will regret the forthcoming cold nights,
forgetting how I cursed heat and humidity.

Bees head out like a congregation leaving church.
Here and there, nature closes shop,
blowing out trees like candles.

I look forward to snuggling with my wife,
deep-diving into shared body heat,
and I don’t want to miss this for anything.


What I Wanted to Tell Her

She was blaming God for the shooting,
erecting a pyramid of mementos, containing
brown teddy bears with bright blue ribbons,
balloons losing their helium, white crosses,
votive candles. She wobbled, because her son
was shot riding his bicycle while being Black.
We can say the heart labors harder before dying.
We can say prayer doesn’t turn bullets into flowers.
We can say Black is the color always mourning.
None of this eases pain.