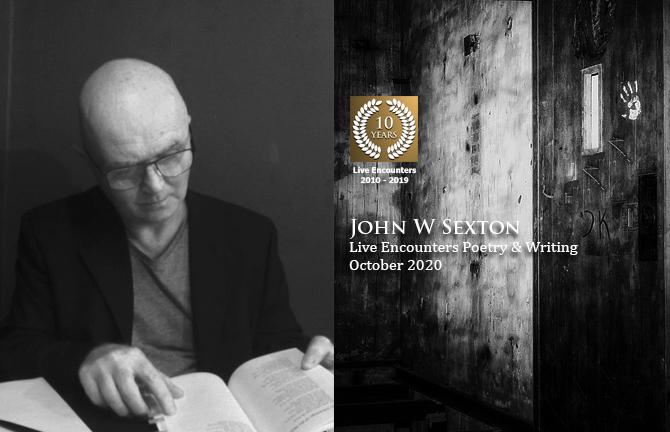 John W. Sexton’s sixth poetry collection, Futures Pass, was published by Salmon Poetry in 2018 and a chapbook of surrealist poetry, Inverted Night, came out from SurVision in April 2019. His seventh full collection of poetry, Visions at Templeglantine, is now available from Revival Press. His poem The Green Owl was awarded the Listowel Poetry Prize 2007 for best single poem. His poem In and Out of Their Heads, from The Offspring of the Moon, was selected for The Forward Book of Poetry 2014. His poem The Snails was shortlisted for the 2018 An Post / Listowel Writers’ Week Poem of the Year Award. In 2007 he was awarded a Patrick and Katherine Kavanagh Fellowship in Poetry.

A House for Mother

For our mother we wove an osier house;
before its wheezing hearth she napped all day.
She ate a beetle and a roasted mouse;
the windows sprouted leaf, shut the night away.

But starlight fell till stars were all undone,
which nurtured in her throat a hacking cough.
She woke with feathers drifting from her tongue,
some were downy fine and some were rough.

The Princess and the Moth

Once upon a time, upon a time, there was a princess,
and one evening a moth came through her window.
The moth had wonderful blue eyes,
one on each wing.

The princess said to the moth:
“I’ll let you look through my eyes
if you let me look through yours”.
And the moth said: “Yes, but let me go first”.

Then the moth looked further,
through the open window.
Outside in the sky was a light,
a beautiful light with a face;
and in its face were dark, sad eyes.

The moth opened its wings and now the princess closed her eyes.
Then the moth flew out through the window,
out over the meadow,
over the swaying ragwort not yellow in the night,
up past the trees not green in the night,
and the princess could see the vivid yellow face of the moon
floating free beyond the sky.

Up, up went the moth;
up, up went the princess.
And up there looking down from its sad grey eyes was the moon,
its grey mouth open in surprise.

They came to me and kissed my face
They kissed me in great numbers
My skin turned green, my mind fell dim
I entered wanton slumbers

The Enigmatic Departure
of Miss Martha Sway and Neighbour