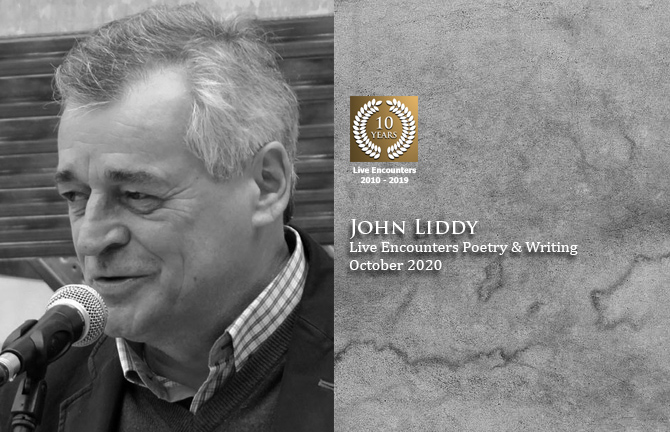 John Liddy, born in County Cork but raised in Limerick, is a poet whose 11 collections include Wine and Hope/Vino y Esperanza (1999, Archione Editorial Madrid), Cast-a-Net (2003, Archione Editorial Madrid), The Well: New and Selected Poems (2007, Revival Press), Gleanings (2010, Revival Press). His most recent book is Madrid (2018, Revival Press). He co-founded The Stony Thursday Book with Jim Burke and edits occasional issues. He is on the advisory board of The Hong Kong Review. Liddy currently lives in Madrid, where he works as a teacher/librarian. Revival Press page on Liddy  Photo ©Carmen Lafuente

Two Views From The Banks of The River Haihe

for Nancy and Tony

On my early morning walk beside the mother river of Tianjin
I noticed a man fishing with the smallest rod I had ever seen.

A home-made invention clasped to the railing, a foot long
with the slick sound of the reel like the notes of a song

Releasing the line, the colourful float alerting him
to every bite, his bucket already half-full to the brim

With carp and mullet, their underbellies the colour of steel,
sea-white advertisements for the river’s name and appeal

To those practitioners of a Confucian proverb made popular
by Mao, the smallest of rods to keep hunger from the door.

And froing of men on fish business, a lone woman with a plastic
bag looking at the water as though it were magic.

Then I watched her take six fish in all, one after the other,
into her hand and drop them in a calm part of the river.

Her gaze held the water until she saw bubbles surface,
the fish dart away with her deepest, most private wishes

And rewards for returning the fish to their habitat
like the tree to its forest, the bird to its flight.

Trying to Explain The Stations of The Cross

for Andrea and Hiki

My two young Chinese guides acceded to a whim
as we entered the Church of St. Joseph to light a candle
for family and friends, while wandering around Tianjin.

Shrines to Joseph and Mary flanked the main altar
and on either side of the centre aisle the Stations of the Cross
adorned the walls, one to fourteen, all so familiar

To me but perplexing to two young women
who had never been inside a church and were anxious
for my  explanation of the story about the crucifixion.

There is Jesus being condemned by Pontius Pilate,
a Roman Governor, and forced to carry a cross
through Jerusalem, mocked and spat at, for what

They asked, as crowds lined the streets and there,
I pointed, is where he falls for the first time, weighted down
by the sins of the world, sins, they enquired, and his mother

Looks into his eyes and wishes to die in his stead
as Simon of Cyrene helps out and Veronica offers
her veil for him to wipe his face, imprinted

Like a payment for a small service, but he falls again
and the soldier’s lash him forward and the women
weep, not for him but for themselves and their children

He tells them and he falls for a third time at the foot of Calvary,
where he is stripped of his garments, possessed of nothing,
Skin torn from his body, oh, they exclaimed, what cruelty!

Nothing compared to his hands and feet being nailed
to the cross, I offered, blood dripping from his wounds,
his face full of love although he is crucified

Until taken down and mourned by his mother
and then placed in a guarded tomb from where he rises
out of death to join his heavenly father.

So he had two fathers and a mother who was a virgin,
They quizzed, and I mentioned faith versus reason,
a missioner’s dilemma, Confucius and his vision.

Where the blackbird tosses the worm
To the evening sound of wood carving,
Patrick is renovating the past
From the sanctuary of the shed.

Time floats to the floor
Like shaving from an ancient tree.
The finished piece a carved
Reflection of the soul.

But those knots of imperfection
Begin the search again
For a thousand year old fallen oak
Entwined in the high grass of the Earl.

History courses through its grains
And what may well have been
The Gallows Tree
Now bears a blooming rose.