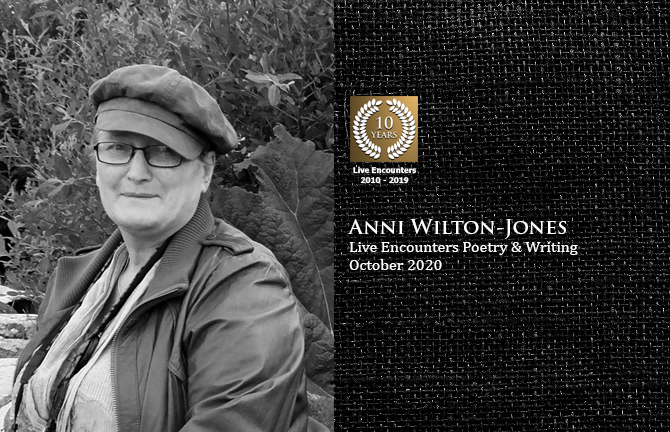 Anni Wilton-Jones, a resident of Co Mayo, has also lived in Wales, England and Saudi Arabia. Having experienced a varied range of careers she is now retired and concentrating on her writing and her photography. A writer of poetry and, occasionally, prose, she has read in Wales, England, the USA and Ireland. Her collections include Bridges, Winter Whiting, Moth (a chapbook about abuse, written under the pen-name Victoria Tims) and Put On Your Thinking Cap (a chapbook of photographs and poems for children). She currently leads Pen & Ink, a Mayo writers group, and is one of the organisers of the SiarScéal festival, for which she has edited the 2020 anthology.

The cars began their threefold spin; on their own axis, on
the cluster’s axis, about the central axis. Maura felt fear
rising from stomach to throat. Always, she felt like this.
Always, she cursed herself for agreeing to hold Keri’s
hand.

Then, for the first time, Keri screamed.
She and Maura would share no more rides.

The ashen face was at the central, first floor window, as I
glanced up at the dark, double-fronted house. The
streetlight showed the watcher’s shocked expression and
I knew that they must have seen everything; my coming
up behind the old man, the rock in my hand, the swift
blow to his head and my hurried emptying of his inside
pocket, which had bulged with the notes I’d seen him
collect at the bank. In one swift move, I grabbed the fallen
rock and rose to my feet but, before I could mount the
steps to the front door, sirens screamed. Surrounded, I
took in every detail of that watching face. The swine had
phoned the cops and, one day, I would get my own back.


So here I am, three years later, a similar good-sized
chunk of rock hidden in my capacious nicking-pocket.
What I can’t understand is that the roof of the house has
fallen in and the front door is sagging open. ‘Bin like it
long as I can remember,’ a passing local has just
remarked. ‘No-one’s lived there for donkey’s years.’ So
how come, in the central first floor window, there’s that
same ashen face… smiling?

He hates grey water; the water that keeps its secrets. He
imagines bicycle frames, shopping trolleys, old prams,
festooned with entangling weeds, underlain with glass-
shard carpets. Caught up in that rubbish, breaststroke-
only incompetent that he is, he wouldn’t have a
snowball’s.


And isn’t it the typical Murphy’s that he’s spent his life
around grey water – harbour, working canal, flooded
wartime bunker, abandoned quarry – carting his ma’s
camera kit about. It’s not just her perversion, either. The
punters are panting for her grey-water-gloomy photos.
They sell fast and for big money, keeping her in designer
denims. Her sickly-sweet sunny postcard scenes merely
pay for his minimum wage as her assistant.


Bored treeless by years of traipsing along with her, his
stomach churning whenever he goes within sliding
distance of the water to pass her some naffing lens, filter
or whatever, he’s sworn he’ll be off the first chance he
gets – like now.

It’s not a great job, of course as his qualifications are
crap. He’s breezed the interview, though. The
Management Path Starter Post offer means he’s on his
way up…  …and, mean cow that she is, his ma is on her
way out.

She’s beside the sluice, setting up the tripod, when he
shoves her. Sure enough, she topples in, just as he has
planned. What he hasn’t reckoned on is her pulling him in
with her and then saving herself by clinging to a shopping
trolley stuck just below the surface – whilst he’s being
sucked under, into the sluice…