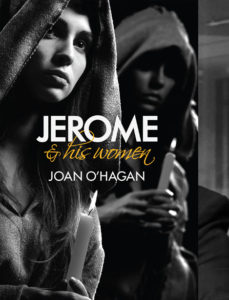 Jerome and His Women (2015) is set in Rome in 382 AD. The Roman Empire is facing internal and external threats to its power, and Christianity is replacing pagan gods and worship.

The Pontiff, Damasus I, commissions Jerome, a priest, theologian and scholar, to translate the Bible from Greek texts into a definitive Latin version. Jerome has the Pontiff’s favour but is unpopular with other Church hierarchy and Roman aristocracy for his criticism of their wealth and wanton ways.

Jerome’s women are a circle of educated widows and their daughters who reject Roman luxuries for lives of piety and poverty. Principal among them is Paula, with whom Jerome forms a close spiritual and intellectual bond. She assists with his translation of the Bible, shares the dream of monastic life in the desert, and funds their eventual escape from persecution to the Holy Land.

The author, Joan O’Hagan, was born in Australia in 1926. She studied Classics at Victoria University of Wellington, New Zealand, and lived and worked overseas for most of her life, including thirty years in Italy.

O’Hagan drew on her studies, surroundings and work at the Australian Department of Immigration in Rome to write internationally acclaimed contemporary and historical crime fiction. Her other novels include Incline and Fall: The Death of Geoffrey Stretton (1976), Death and a Madonna (1986), A Roman Death (1988), and Against the Grain (1987).

O’Hagan started working on Jerome and His Women in the British Library in the 1990s. She finished the novel in Sydney shortly before her death in 2014. On its publication, her daughter, Denise O’Hagan, observed, “I never knew my mother not writing.”

That is the twin gift of Jerome and His Women: It is a tale of extraordinary times and people, brought to life by a skilled researcher and writer.

Jerome & His Women by Joan O’Hagan is published by Black Quill Press and is available at
https://blackquillpress.com/independent-publishing/jerome/
Amazon, Book Depository, Booktopia, Barnes and Noble, The Nile

Robert Fairhead is an editor and writer for TallAndTrue.com, an online magazine, blog and forum for writers, readers and publishers, and blogs at RobertFairhead.com. His articles on dogs have appeared in local newspapers. And he has written book reviews for Writing NSW. Robert is also the principal copywriter at Rocher Communications. You can follow him on Twitter at @tallandtrue.

Joan O’Hagan was an internationally published crime writer. Thanks to a classical background, a wicked imagination and thirty years of living in Rome, here she breathes new life into an ancient saint and his world, drawing us into a highly-charged world of danger and intrigue while reminding us to question our own values. Her other publications include Incline and Fall: The Death of Geoffrey Stretton (Angus & Robertson, 1976), Death and a Madonna (Macmillan 1986), Against the Grain (Macmillan 1987), A Roman Death (Macmillan 1988).