A native of Galway, Ireland Geraldine Mills is a poet and fiction writer. She has published five collections of poetry, three of short stories and a children’s novel. She has won numerous awards for her fiction and poetry, including The Hennessy New Irish Writer Award, a Katherine Kavanagh Fellowship and has been awarded two Arts Council bursaries. Her fiction and poetry are taught on Contemporary Irish Literature courses in the USA. She is a mentor with NUI and a member of Poetry Ireland Writers in Schools’ Scheme. Her most recent poetry collection, Bone Road (Arlen House) and some of her other titles are now available from
https://www.bookdepository.com/search?searchTerm=geraldine+mills&search=Find+book 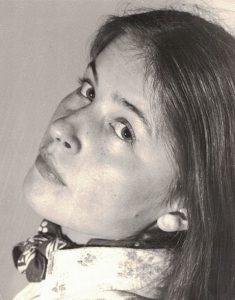 I was sitting in my writing chair that looks out onto the garden, jotting down images from this vantage point: a white horse against the blue of sky, a goldfinch perched on the teasel, holly berries brightening. My pen moved across the page as my five-year old granddaughter stood by my arm, her feet jigging up and down. I paused, asked what she was doing.

‘I’m dancing to the music of your pen,’ she said. And there it was, the glistening, untrammelled link between reality and the child’s creativity.

Children live their lives in metaphor, knowing nothing of vehicle or tenor or the common ground between them. They see the world just as they see it, in all its realms. They are our greatest inspiration.

There was another occasion when my grandniece was in my care for a day; after we had a tea party with her animals and we messed up the kitchen making bubbles and constructing a train from collapsed chairs, she took off on her own trip.

While the rains poured down outside, she strolled along the narrow road of our hallway with a parasol in one hand and a large magnifying glass in the other. She was hunting for bears. Using her eyeglass, she peered behind corners and inside boots to see if she could find them. She returned exhausted from her expedition and had to be revived with one of the fairy cakes we baked earlier. The bear had gone to one of the planets that day.

Months later I was reminded of that image as I prepared a visit to the junior classes in a local school. Hunting for Bears was the perfect basis for a story that they could identify with. I wrote it down, gave the character a name, a purpose, packed my parasol, my magnifying glass, a teddy bear or two and off I went.

Standing in front of the children, they happily inhabited the world I painted for them. Getting them to form a round with their thumb and fore finger, they created their own spyglass. We practised looking through it before we wandered around the room searching for this elusive bear. They rummaged in their lunch boxes, interrogated the teacher’s cupboard, infiltrated the pockets of their coats. Finally, the furry creature was spotted near the shelf of copybooks and the story ended happily; but not before they decided we should go looking for elephants next.

By the time I had packed up my bag of tricks, they were getting ready to return to the world of arithmetic and spellings. Back into the real world again.

I am forever learning from children, rediscovering the child I used to be. Growing up we were let run wild in the woods. Our mother, wise in her negligence, put no stop on us as we tumbled over the discarded cinders of yesterday’s fire as we scaled the stone wall of the everyday into the forbidden world of the other.

We lived between ground and air, feral, hunter-gathers that stripped brambles of their purple-nippled fruit, threaded ghostly mushrooms onto long filaments of grass; gnawed the flesh off claret-ripe haws as if juicy apples. We were experts in the foraging of the hazel nut, knowing nothing of the tree’s lore, only the magic of its abundance. We scavenged tree after tree, our instinct sharp in its knowing, ripeness proving itself in the flick of a thumb against the bract that surrendered a perfect mahogany kernel from its sheath.

When we had our cache, like small wood animals we settled on the cushions of moss beneath the trees, the stone a perfect tool in the crucible of our palms. Then as the sounds of shell cracking drove the magpies from their perches, we eased out each perfect kernel. We gorged on each one, no need to go home for dinner, a midden of shells mounting at our feet.

Our lexicon of everyday words included bramble and nut, wren, hare and magpie. They had their importance in our world. It never occurred to us that they could be dispensed with. And that is what happened some years ago when a popular children’s dictionary decided that these words were no longer in vogue; they were devalued currency and as a result, were replaced by the ABC of analogue, broadband and chatroom. Andrew Motion, the former UK poet laureate, said that “by discarding so many country and landscape-words from their Junior Dictionary, it denies children a store of words that is marvellous for its own sake, but also a vital means of connection and understanding.” The beautifully illustrated book The Lost Words by Robert Mc Farlane and Jackie Morris is a response to the removal of these words so that they will be kept alive for the future.

It is crucial that every child has access to the treasury of words that enrich their imagination. Around the world there are hundreds of writing organisations, especially the International Alliance of Youth Writing Centers that support development of creativity among young people. Included in this alliance are the Story Planet from Canada; Gabinete de Historias from Buenes Aires; The Writers’ Exchange from Vancouver; Sydney Story Factory, and many, many more. Each of these organisations encourage writing and storytelling in order to develop the self-esteem of children and teenagers so that they can believe in themselves.

Here in Ireland we have a similar resource for mentoring young writers. It is called Fighting Words (fightingwords.ie) and as their website states their ‘aim is to help children and young people, and adults who did not have this opportunity as children, to discover and harness the power of their own imaginations and creative writing skills.’

Founded by Seán Love and Roddy Doyle, Fighting Words is also about using the creative practice to strengthen children and teenagers – from a wide range of backgrounds – to be resilient, creative and successful shapers of their own lives. Patrons include such notable writers as John Banville, Colum McCann, Ann Enright, Nick Hornby, Richard Ford and Lorrie Moore.

By giving a global platform to the writers of the next generation, Live Encounters continues to foster that support. By giving them a voice, seeing their work published goes a long way towards developing that self-esteem. And with that young people can dance to the music of their own pens.