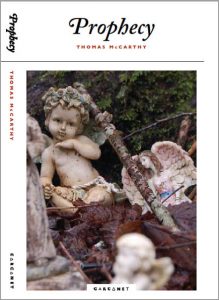 Thomas McCarthy was born at Cappoquin, Co. Waterford in 1954 and educated locally and  at University College Cork. He was an Honorary Fellow of the International Writing programme, University of Iowa in 1978/79. He has published The First Convention (1978), The Lost Province (1996), Merchant Prince (2005) and The Last Geraldine Officer (2009) as well as a number of other collections. He has also published two novels and a memoir. He has won the Patrick Kavanagh Award, the Alice Hunt Bartlett Prize and the O’Shaughnessy Prize for Poetry as well as the Ireland Funds Annual Literary Award. He worked for many years at Cork City Libraries, retiring in 2014 to write fulltime. He was Humphrey Professor of English at Macalester College, Minnesota, in 1994/95. He is a former Editor of Poetry Ireland Review and The Cork Review. He has also conducted poetry workshops at Listowel Writers’ Week, Molly Keane House, Arvon Foundation and Portlaoise Prison (Provisional IRA Wing). He is a member of Aosdana. His collection Pandemonium was published by Carcanet Press in November, 2016. His new work, Prophecy, was published by Carcanet in April, 2019.  https://en.wikipedia.org/wiki/Thomas McCarthy (poet)

I think there’s an invisible and inaudible thought of advancing in poetry, something that propels us, year after year: as poets we always feel we must improve or expire.

This really is a permanent anxiety, a sort of ethical restlessness, that never leaves the poet.

It’s a deeper ambition than merely wanting fame, a deep person-centred quest that begins very early in our poetic careers.

But by the time a student poet completes her or his writing post-graduate programme, or has attended his or her second or third Advanced Writing workshop at a major literary festival, a proper sense of anxiety settles in. Such a new writer, of whatever age, is a serious person and the impulse to be a ‘poet’ is no longer an idle impulse. There is more urgency and ambition, a more anxious looking over the shoulder to gauge the trajectory of others, both fellow poets and published teachers. Over the last four or five years at Molly Keane House in Co. Waterford, and more recently at the Advanced Poetry Workshop of Listowel Writers’ Week, I’ve tried to convince such serious poets that ‘business as usual’ is no longer an option in their work. Habits of writing and, more crucially, habits of thinking about the writing life, formed and settled over the first urgent years, are no longer sufficient to make the best possible kind of poem. This observation also applies to my own work: in recent years I’ve become bored with patterns of sameness, with repetitions of formulae and poetic tones that belong to an earlier, younger self. A poetry that depends upon a form of youthful apologetics is truly dead: I can’t go on writing as if it was 1972 or even 2002 in my own life. Nor can I read other poets whose work bores me. Their work has become almost unbearable and I purchase their new collections with a feeling bordering on panic. No, not panic, more a literary agoraphobia, a fear of venturing out yet again into over-worked territory; across once fertile fields that are now barren for want of new colours, ideas and rhythms. I close such collections and wonder: will this creature of the poetic world ever again harvest a crop of sweetness and plenitude? Why hasn’t the fertility inside their first works been replenished? Why are the new poems like mere shadows, why is there no urgent sense of plenty?

In all honesty, and in every case, a change is needed, a proper new beginning is required. But how is one to make a giant leap forward? A new technique or tone almost always comes at the end of some kind of quest: one serious accident, a catastrophe, a change of country, an invasion, war, exile, the death of a close beloved, the banal arrival of cancer, the sudden exposure of some cherished but fraudulent political class – any one of these might seem like the end of a long quest and the beginning of new language. But these are traumatic events where the world crushes our long passivity. Trauma is not always available, and, anyway, be careful what you wish for. How is a poet to change if his or her life is saturated with a sustained ordinariness? If you’ve been teaching in a College programme or skippering the same Atlantic fishing-boat over the same fishing banks for twenty years, how are you to uncover a new tone, a new colour, a new way of looking at things? How can you make that accident happen? Middle age makes novelists of us all, the writer Frank O’Connor once said, because we begin to see the patterns of injustice.

But as poets we must resist the impulse to write a novel.

Instead, as we mature we should be looking to write a poetry with the novel’s robustness and studied integrity. It is possible to absorb fully the ironic injustice of life and aging, the deadening hand of a long sameness, and to save these insights for the making of a very different kind of poem. It’s not that you need to find that authentic ‘true’ personal voice – you’ve been trying to do that for perhaps twenty years – but you do need to find the true voice of poetry. How is that found? Where is it? How can we get closer to the true voice of poetry, the poetry appropriate for your life now? Renewal doesn’t lie in the effect of others, though others can certainly point the way. A poet struggling for renewal, for a lost intensity, could go back and read the astonishing late poems of Yeats, that body of work that is as permanent, distinctive and noble as the surviving Georgian architecture of Dublin. Or a poet might turn for inspiration to the filigreed private grief inside Anna Akhmatova: ‘We aged a hundred years in that one day.’ Or the older poet could turn to the works of younger genius, to the inimitable brilliance inside Alice Oswald’s WOODS, ETC. or Sinead Morrissey’s ON BALANCE. As they gambol and tumble over obstacles that held us back, the young carry new insights from a newer kind of life. It’s a wise sage who learns from the fearlessness of those who have just begun, though neither Oswald nor Morrissey are beginners! But their technical breathlessness is exemplary.

It’s just that we need to acknowledge the arrival of a turning-point in poetry. The young always begin at what seems to them a turning-point. Achievements in a poetry that are younger than us can teach us to look critically at our own method and technique. Like the very serious poet who has attended his or her third and quite expensive Advanced Workshop, we need to pull back, to draw breath and consider the wealth of possibilities still wide open. A working poet can always assume prodigious rights over language, much more than language and its established traditions can ever assume over a working poet: “Je ne fais pas de système. Mon système – C’est moi” as Paul Valery wrote in his Cahiers XXVI (p438). To write poems is both to make the thing and to dwell within it. It is not an excess of theories, it is a quieter place, yet intense, that place where we dwell in the poem – as the wonderful Yves Bonnefoy observed, Bonnefoy who had endured the garrulous, public pretensions of surrealism, as he observed, poetry is: ‘A surging state of impossible fullness.’ Bonnefoy and his circle had observed the surging fullness of Giacometti and the proud muteness of his artistic effect in a room full of theorists. To create this artistic effect, then, to defy theories and generalisations, this is all at the core of new beginnings, of defying dullness with a new, vectored excess of being. In a recent PARIS REVIEW interview (The Art of Poetry No.104, Spring 2019) Lawrence Ferlinghetti bristles with rage when interviewer Garrett Caples asks “Can you speak more about your writing process in general?” Ferlinghetti explains that the whole idea of ‘process’ is alien to him; that these things are acutely personal, even secret, and intimately bound up with the poet’s own figures of speech. It is our figures of speech that are original to us, that give us originality as poets. His response is clear-headed and defiant. Our personal lives as poets give us these prodigious rights over the language we choose to use.

A poem pared back to stretched essentials, like a Giacometti canvas or sculpture, could still be a state of mind rediscovered, a place of frugality and yet of lyrical abstraction. But the poem when it arrives within us refutes all theories, it overwhelms Theory.

A poem is a picture more than a theoretical thing.

The apt observation contained in a poem is a living, breathing thing. For Bonnefoy the rightly observed thing could be full of plenitude, a poem could be a cliff-face, a glade, an orchard.

Poetry was an architecture of habitation, a place to make for oneself and to dwell within. But a shared space, of both poet and reader.

So how can we arrive at this space, this settled space of achieved poetry, a verbal space within which we may dwell as whole persons? Great novelists, like great poets, can teach us about an advanced wholeness of being. We can learn from novelists without ever intending to make a novel.

A novel is a quest with all of its architecture still standing, a novel is a house of tone in the way the best late poetry collections should be.

Elizabeth Bowen, for example, in her description of interiors, of sitting-rooms and bedrooms, in The Last September and Death of the Heart can lead us to a deep understanding about a fullness of being, about character as a whole imagined being – as the characters Lois or Portia move across their interiors even inanimate things begin to have voices. This is how poems speak to us when written with intensity rather than indifference. A novelist can never be indifferent to the world described; there is no reason why a poet should be any less indifferent. It has something to do with finding a tone, but a tone with purpose, a tone with personality like a character in a novel. This is the fullness we should be seeking after in our poems: An escape of sunshine, penetrating the pale sky in the south-west, altered the room like a revelation. Noiselessly, a sweet-pea moulted its petals on to the writing-table, leaving a bare pistil. The pink butterfly flowers, transparently balancing, were shadowed faintly with blue as by an intuition of death. Lois bowed forward, her forehead against the edge of the table (The Last September, p163). 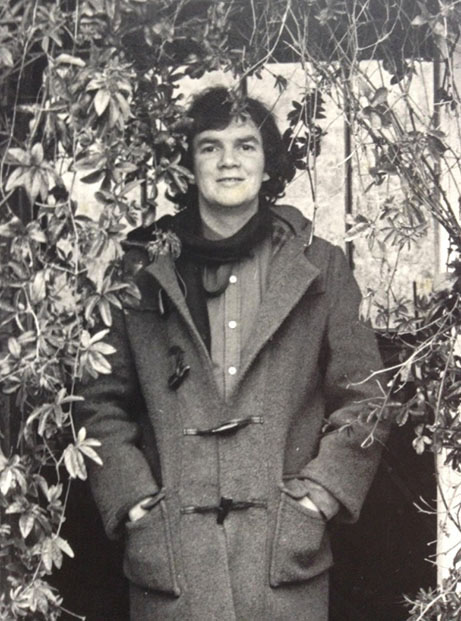 It has something to do with tone, then, this impulse to go on in writing. The search for a new tone will bring you back to the place where the figure of speech is paramount: where the way you describe is the way the world is. The funnels and runnels of language are deep and complex; the years ahead have no pattern for us, nor should we expect one. As we advance in our years and in our poetry it’s the search for the new tone in our work that brings the possibility of excitement – the patterns are the very things we leave behind on the road. But we ourselves must make the patterns ahead of us; yet again, in poetry as in life.