Tim Cumming is a poet, artist, journalist and filmmaker from London. He was born in a children’s home in Solihull and was brought up in the West Country. His poetry collections include The Miniature Estate (1991), Apocalypso (1992, 1999), Contact Print (2002),The Rumour (2004), The Rapture (2011) and two collections from Australian press, Pitt Street Poetry, the art and poetry of Etruscan Miniatures (2012) and Rebel Angels in the Mind Shop (2015). A new collection Knuckle is due from Pitt Street Poetry in 2019. His work has appeared in numerous anthologies, including The Forward’s Poems of the Decade, the WS Graham anthology, The Caught Habits of Language and Bloodaxe Books’ 2010 anthology of poetry from Ireland and the British Isles, Identity Parade. He made the acclaimed Hawkwind: Do Not Panic documentary for the BBC in 2007, has shown his film poems at cinemas and festivals worldwide, and writes regularly about music and the arts for the British and international press.

They shouted over the roar of the engine.
Just a few seconds sleep is all it took;
Time became a character in a book,
hiding its hands in a dirty gabardine,
sloping off with a casual acquaintance
for a smoke in the canteen of the Station Hotel,
filling the room by keeping his distance,
nodding to a taxi driver; knew his father well,
climbs in behind with a foreign journalist
traveling alone, posing as some casual tourist.


‘Where you been?’ To the coast, she smiled.
Your time has come, said time, turning the dial
from Moroccan metal to cosmic hiss,
the big hand growing in the small hand
of the big bang as experts insist,
pungent as compost and heavy as breath,
radio signals ricocheting amongst the nearer
stars scattered like piss around a lamp post.
The driver slept for a second,
and the second hand was death.


Me and her, we’d flown in late,
roped down with gin slings and shaved ice
from executive lounge to departure gate,
two sidekicks without a case.
There were rumours and ghosts to greet
our arrival, Bogart  breaking bread
over the carousel at Casablanca airport,
waiting for an immortal connection,
a metaphor that grips like a seizure
or a final destination,


fog around the terminal
and here comes Ilsa, beautiful, pure
and permanently fuckable. The radio
signal oscillates to the echo of a
Berber guitar the electric current
of popular song winding through the air
of a north African truck stop
two hours from Casa at 3am,
the lights the colour
of Bombay Sapphire gin.


We stocked up on coffee and cola,
our driver’s headlights hugging the coast
to the sea blue doors of Essaouria,
riding with the mist that rises at night
with the all-night drivers, foot pedals
pitted to the metal with the names
of god looming through the night fog,
the dinosaur tracks of dead trucks on the side
of the highway where one wheel
strayed from the surface in sleep,


in the darkness before dawn and
the flickering lights of emergency
services, the dead taken away
and big machines opening and closing
on all that gargantuan imagery
of lorries piled up by the side
of the highway. Our death was writ
as large and lit from behind,
in the driver’s lights as we slowed
for a minute then sped on by. 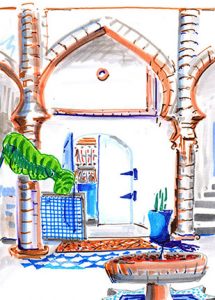 Boys bestride the cannon
on the battlements of Mogador,
sea salt and slavery bells
spice the wind, futile shot
from man o war, and here
was the slave market,
here the magical herbs,
a lizard on a string
in a blue shadow,
a thousand pipes of smoke
on a beaded necklace of metal
worked from the desert.


Let the blue sky reverberate
the corrugated empire under the sun
shaking to the voice of the muezzin
before dawn, his crackling retinue
of passion players winding a sheet
around the world as the red spirit
manifests, cross rhythms rising
with the black sun and sheets
of flame of flesh on flesh and yes
there, no there, deeper, yes

The smell of henna
in the air from the
girl on the sea wall
with her sister and
her father and his brother,
one of them a fisherman
stepping out of the
water with his daughter
and her friend or her
sister and the henna
in her hair blows
into my air through
the nostrils and into
the mind, what cauldron
of immortality and travel
this is, Kasri’s Gnawa
aligned, like the fishermen,
to the lunar calendar,
first stars, the stomach’s
cranium, the bass line
already there ready to
be pulled up to the surface,
stickleback rhythms and broken
water in the soul’s irrigation.
‘It’s like hearing cave paintings’
I shout across to a new friend. 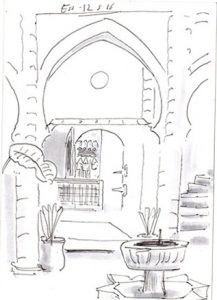 A few drops on the paper
and the years roll out to a
signalman’s flurry of grammar
and vocab, declinations of
the doing words, the Gnawa
street troupe with Justin,
all strap and no guitar,
dust on his heels and a chit for
his Gibson at Casablanca.
We’re in the medina,
imaging sepia pictures
of his youth in Cairo and father’s
diplomatic services, the dark-skinned
men in djebellas behind lean faces
begin to rustle and shimmer,
the distant sound of pipes
and krakeks, the little boy with
all the future moves, a cool
water mingling with hot to a
bathing temperature and here
they come, stepping from the frame
onto the street, dressed in white
and lunar orbits, the old pictures
coming to life all over town,
the rocks and the beach and
every white breaker a flag
of surrender, a call for submission.
Here, there is an altering magnetism.

I’m in Jimi Hendrix’s room,
13 Riyad el Medina in the blue
heart of Essaouira, a high
keening note in the wind
between my teeth, the firm
facts dissolving like soap.
He stayed for tea and a smoke
one afternoon with two
beautiful Moroccan sisters,
their signal fading out a year
or two later before Jimi steps
into his own picture and vanishes
from the surface of a room
in Notting Hill, turns up here
again, mucking about with
weird tunings and beading
his necklace with rhythm,
knots to tie a bassline
before the wide voyage out
takes each and every one.

Beads from the necklace of a seafaring
god in Ucef’s room at the Hotel Sahara,
passing hashish from one to another,
sculptures of smoke rising from street grills
of beef and chicken, tall wooden giraffes,
Senegalese women. The eyes’ currency.
No, I do not eat couscous.

Three young Moroccan punks stopped us
by the blue door to Villa Maroc to show us
the head of Sid Viscous on a black leather
jacket, cured hide of a holy beast for some,
for others a feast. We slipped onto Rue
Attarine, name of a lover from an early
Godard film, at the crossroads where

Kasbah and mellah decide with each other,
to find Kamel the night fisherman
working up steam in a laundry room,
cotton under the hot press of old technology,
a head for weather, the advancing storm
comes light as a feather. Kamel says no
sailor ties a knot against the wind here. 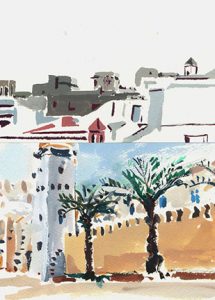 Joined us at table by the counter
at Patisserie Driss opposite the doors
to the mosque and described us
a sailors’ ritual for the prophet Noah:
gather at the shore, sacrifice a goat,
make tea and couscous, pray storms
into stars and then proceed, his hands
parting the way to thermodynamic voyages,
sardine catches, the coast of Mauritania
and coasts beyond, the ocean of darkness
he calls the Atlantic, clinging to a skeleton
key, heaving skies and heavier currents,
moving under the instruments of science,
Youssef wears dreadlocks and shells,
the magic carpet of initiation and experience,
swaying in the ocean of the lunar cycle,
a Gnawa tune with stars and sea winds,
Aisha, and the red thread of a shanty,
flashes of the dead scooped up in its nets
and left to sink or carried to land  and now
it is done and there are no more voyages
for Youssef the fisherman. 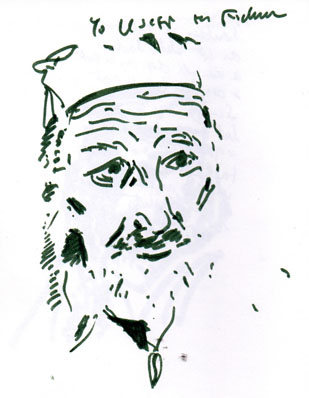