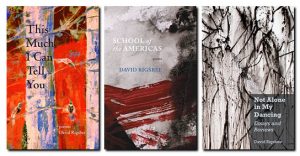 David Rigsbee is author of, most recently This Much I Can Tell You and Not Alone in My Dancing:  Essays and Reviews, both from Black Lawrence Press.  In addition to his eleven collections of poems, he has published critical books on the poetry of Joseph Brodsky and Carolyn Kizer and coedited Invited Guest:  An Anthology of Twentieth Century Southern Poetry.  Dante: The Paradiso will appear from Salmon Poetry in 2019.                                  https://www.poetryfoundation.org/poets/david-rigsbee

I recently attended a public reading by prominent poets, after which was a Q&A.  Someone asked what should poets and poetry itself do in the Age of Trump.  The poets themselves appeared baffled.  After all, it’s not as though the practice of writing poems draws the attention, let alone approval, of anyone.  As a matter of fact, poets are as insular and self-involved as they are disempowered and excluded.  This has been the case for much of the history of the US, for whom, if citizens read at all, it is prose that remains the gold standard for discourse.  The poet, in other words, doesn’t participate in what philosopher Michael Oakeshott called “the conversation of mankind.”  But the questioner’s urgency caught everyone at the gathering.  That is to say, the choir.

Of course, it goes without saying that the audience consisted mostly of other poets.  Thus we knew that the internecine wars between poetry groups did us no good in the non-reading public’s eyes.  We also knew that support for creative writing, while widening among undergraduate and graduate students, also felt the pressures of academic reemphasis on the sciences and business—two routes toward financial security, not to mention the ongoing inability of the humanities to justify their study.  There were other complicating factors:  the culture wars, the government disdain toward artistic support, the sneaking suspicion that the arts held the public itself in contempt.  What’s more, from the other end, poets as diverse as John Ashbery, Jorie Graham, and David Baker had begun to approach the problems of complexity head-on. They recognized that composing poems in view of the layers, that is, the incoming of sensations, memories, and vagabond thoughts that form our encounters made for an uncomfortable linguistic challenge to poetry’s fidelity to its ancient heritage.

This querying of means worked against purpose too, as poets of mid-twentieth century Europe and America knew.  The trauma and mass atrocities of the Second World War caused poets to rethink their early rousing and resistant, patriotic verses and to turn to simplicity, understatement, and surrealism to bring language into dubious alignment with the post-War shift.  I refer to materialism, both philosophical and scientific, technological expansion with its attendant threats and dooms, and the struggle for rights in the face of anonymity.  The roster of these remade poets is long, but here are a few examples.  France produced poets like Francis Ponge, who gave up patriotic resistance poems to write a book about a bar of soap (Le Savon), and American Muriel Rukeyser wrote the infamous (and influential) “St. Roach,” a poem that paid homage to vermin, in order to raise awareness of dehumanizing forces on the loose during the execution of the Vietnam War.  No less a worthy than Czeslaw Milosz both chronicled and championed the markdown poets of his generation, for whom the pebble was a sign of integrity for the human who had awakened from the war only to find herself living in a world of “pre-casket somaticism.”

Indeed, language itself was hauled into court by poets like Paul Celan for having been the vehicle that promised an ideal humanistic culture, but which found no exoneration in the tragic claim that, after all, it meant well.  Language was what bound the SS to the Jew, and it was not therefore an innocent party.  Nihilism followed suit and its sibling, irony.  Despite the fretting of Eliot and Auden, the conclusion held that with the death of God, the top and bottom were indeed interchangeable (a conclusion foreshadowed by Dostoyevsky).  The hierarchies of art no longer convinced.  How then move poetry from this depressing topsy-turvy to a new seat at the table?  Someone suggested political poetry—protest poetry, such as was written during the Vietnam War.  Another immediately countered that protest poems often meant lowering standards, enlisting poetry for political purpose, however well intentioned.  The first speaker came back with Robert Bly, W.S. Merwin, Adrienne Rich, and Galway Kinnell as examples of engaged poets whose matter, like a fever, elevated subject over form, but who did so honorably and artistically, their political phases not marking a prolonged dip.  It wasn’t an inconvenient intrusion in otherwise clear trajectories:  careers and destinies didn’t necessarily overlap. I thought of Denise Levertov, for whom the war did bring on the feeling of grim determination, though I didn’t speak up.

These and similar versions coursed through our minds as the poets of the evening stood there beside the podium standing and thinking, trying to be helpful, trying to come up with an argument that would convince the choir that its obligation to cultural virtue still worked in the form of poems.  Meanwhile, a storm had come over the Hudson River adjacent to the reading room, the rear wall of which was a series of tall windows, and its eruptions of thunder and lightning gave the occasion an air of impersonal uncertainty and drama. Not unlike the rise, again, of authoritarianism, and the waves of intimidation and insult that we felt as the new condition of our living.

I thought then the late poet Linda Gregg, whose four-decades-long friendship was to my mind a continuous conversation both endless and deep.  Linda thought poetry the most important thing in the world, and that conviction attuned her to ancient simplicities that sought beauty to defy the dying of spirit.  To submit to the premise of Stevens’ “Gubbinal” (a gubbin being a dullard) that “the world is ugly/ and the people are sad” was to achieve nothing.  On the other hand, for one to participate in the creation of something as beautiful as a poem was both to square our divorce from nature and to exalt the condition of living beings, in spite of the world’s cruelties—the dues paid for the brief privilege.  It was a credo as simple to state as it was hard to achieve.  One poem of hers, in particular, stayed in my mind.  It goes like this:

Fishing in the Keep of Silence

There is a hush now while the hills rise up
and God is going to sleep. He trusts the ship
of Heaven to take over and proceed beautifully
as he lies dreaming in the lap of the world.
He knows the owls will guard the sweetness
of the soul in their massive keep of silence,
looking out with eyes open or closed over
the length of Tomales Bay that the egrets
conform to, whitely broad in flight, white
and slim in standing. God, who thinks about
poetry all the time, breathes happily as He
repeats to Himself: there are fish in the net,
lots of fish this time in the net of the heart.

There is a serenity in the poem that recognizes both the sweep of the ultimate and the importance of the small—the disposition of the eternal toward the ephemeral and vice versa.  At the same time, the poem is not naive:  we are aware that the world is not without dangers.  God sleeps, for instance, and that fact should put us on our guard, but guarding is essential to the poem, for the ancient word “keep” names that part of a castle that is most protected and likewise most vulnerable.  Presumably, God, when he falls asleep, dreams, but we are to understand that His sleep is the place where He—as Logos, or the top of art and wholeness—is restorative and safe.  It is only we who undergo nightmares, anxiety, and dread, only we who are guilty in the course of our making.  This is not the case for the rest of nature:  the owls and the egrets do not succumb to our nightmares, nor the fish, who are caught and give up their being for our sustenance.  They are themselves a “catch,” that is, a poem.  I remember that the prescient title of one of her collections is Chosen by the Lion.  And then there is that startling assertion, which for a magician would be the 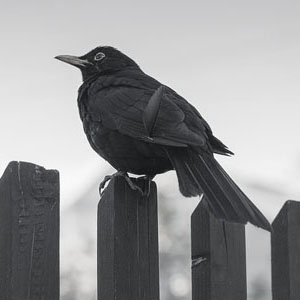 “reveal”:  “God, who thinks about/ poetry all the time, breathes happily…”  If God does anything of the sort, then our creations collaborate in restoring a balance that death, degradation, and even language are keen to snatch away.  Note that this applies to “this time” and “the heart,” an achingly risky metonymy for the wish poets now have to reswear their vows in a dark time, to borrow Theodore Roethke’s apt phrase.

I have a friend, a painter of some distinction, who, when asked how she defined God, replied, “Your best thought.”  Linda would have agreed, and I suppose the work of imagining one’s best thought is equivalent to protesting the mediocre and the inferior.  Once that thought is written and felt, it does begin to trim the contours of the human conversation, even if it does not steer it.  That’s a good reason, in spite of our place in other people’s schemes, to think about poetry all the time.