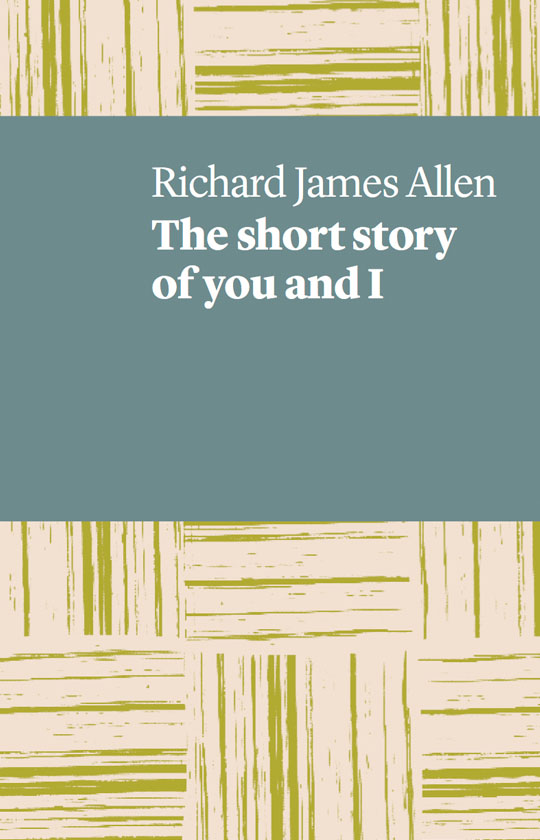 Richard James Allen is an Australian born poet whose writing has appeared widely in journals, anthologies, and online over many years.  His latest volume of poetry, The short story of you and I, was published by UWA Publishing in February 2019.  Previous critically acclaimed books of poetry, fiction and performance texts include Fixing the Broken Nightingale (Flying Island Books), The Kamikaze Mind (Brandl & Schlesinger) and Thursday’s Fictions (Five Islands Press), shortlisted for the Kenneth Slessor Prize for Poetry. Former Artistic Director of the Poets Union Inc., and director of the inaugural Australian Poetry Festival, Richard is the creator of #RichardReads (https://soundcloud.com/user-387793087), an online compendium of Global Poetry, Read Aloud, and an editor of the landmark anthology, Performing the Unnameable: An Anthology of Australian Performance Texts (Currency Press/RealTime). Richard is well known for his innovative adaptations and interactions of poetry and other media, including collaborations with artists in dance, film, theatre, music and a range of new media platforms.  The recipient of numerous awards, nominations, and grants, as well as opportunities for presentations, screenings and broadcasts, in a unique international career as a critically lauded writer, director, choreographer and performer for stage and screen, he graduated with First Class Honours for his B.A. at Sydney University and won the Chancellor’s Award for most outstanding PhD thesis at the University of Technology, Sydney.

As the world seems to be rediscovering it’s shadows at an alarming rate, one could be forgiven for questioning the value of poetry, of art itself. As we stand, apparently helpless witnesses to the destruction of our values, the psychological and physical environment in which we live, what could be the purpose of our scribblings, our expressions in whatever form? As various luminaries have pointed out over the centuries, art changes nothing, enacts nothing, saves nothing.

And yet how untrue this actually is, because, of all the countless lists and endless inventories and catalogues one could amass of human activities, almost all of which judge themselves above art in their time, only art survives. Only art lives on to tell the tale, like Horatio after Hamlet’s slaughterhouse. Bring to mind the unthinkable level of destruction of the First World War, the millions and millions of moments of individual and collective suffering, and yet the moments that come alive as if they are happening today are the ones that were experienced and written about by poets such as Owen and Ungaretti. We remember the Crusades through Chaucer, the Napoleonic era through Tolstoy, the fin de siècle through Baudelaire, the Irish rebellion through Yeats, the Weimar Republic through Isherwood, the Nazi extermination camps through Levi, the siege of Leningrad through Akhmatova, the Soviet gulags through Solzhenitsyn, the Harlem Renaissance through Hughes, and we will remember the offshore detention centres through Boochani.

The list goes on and on if we scan the map of our cultural memory. It is the imagination of the time that becomes the history of the time. So while the writer and the artist generally have to endure a life of contempt, abuse and deprivation, being kicked around and scorned, lucky to survive, with the dogs, off the scraps off the table inhabited by the people who don’t even question that they exist on some imaginary higher plane, the Fool has the last laugh on the King.

Of course, art is not, nor would we want it to be, only about big historical turning points, moments of crisis and change. It is also valuable in cherishing the apparently unmemorable moments: the tiny gestures when a person is thinking, but doesn’t realise that anyone is watching; the unexpected shared smile that momentarily unifies two lives; the act of kindness, whose intention carries far more weight than its practical application; the lacuna of an unadmitted, subtle betrayal; the forced smile that tries to shift the attention from envy; the awkward stumbles of not knowing what to say when being unexpectedly in the wrong place at the wrong time; the sly distraction of a sudden lust that might, if pursued, open the gateway to deeper love; the intuitive, often embodied, shift to a different plane of consciousness, the wondrous access to insights that seem like magic… All this and so much more…

We need our writers and artists to remember all the moments, not only the historically important public ones but also those that are privately and spiritually significant. And they have the ability, in their various mediums, to shape these into stories and patterns of words, thoughts and feelings that illuminate our humanness, in all its craven and uplifting spectrum.

So this also means we writers and artists can’t give up, can’t sink into despair, can’t feel sorry for ourselves, can’t surrender in the face of hardship, wickedness or the closing down of our horizons. Because we have a job that only we can do. We have a responsibility to witness, to remember, to record the truth as we see it, good and bad, simple and complex, thrilling and banal, palatable and agonising. We have to create the time capsules that carry our humanity forward. It is an exhausting and often thankless task, frequently misunderstood and extremely difficult to achieve at a high level of sophistication. But we have to rise above the selfishness and pettiness and mediocrity in ourselves and all around us. There are richly layered stories that need to be articulated, subtle emotions that need to be captured, half-understood injustices that need to be revealed, resonant beauties that need to be memorialised.

Given all the issues facing us today, do writers and artists also have a role to play in contributing to contemporary debates and struggles? If so, does that mean that we should make issue-based art? Funding bodies tick boxes, is that how we should approach our writing and creativity?

I have never been one for trying to argue something in a creative medium that could be more clearly, directly and effectively communicated in some other form. And, while I have a very broad definition of poetry, I have heard and read many poems that, to my ear and mind, stop being ‘poetry’ when they become polemic.

But that said, some of the greatest masterpieces of art do embody a political or social point of view, and I think that might be because there is a wholeness, a three-dimensionality, to their vision, that might lean in a certain direction, but it avoids simplicity or dogma. It shows both sides of an equation and has empathy for all players, even if it settles on certain moral choices in the end. Masterpiece films like Laurence of Arabia, On the Waterfront, The Lives of Others, come to mind. Set in very specific historical periods, they navigate complex political, social, ideological issues, with stories of interpersonal conflict and personal psychological challenge. They don’t just preach to the converted. I don’t see these works ever losing their resonance, even as our circumstances keep changing. So that’s a high bar to success, but, I would say, one worth aiming for.

One of the areas I am most excited about for the future, around the world, is First Nations’ storytelling – across, and interweaving, all areas of writing, arts and film. And my hope is that the descendants of the colonisers can start to move beyond a guilty, or disinterested, ticking of boxes to a genuine engagement, and with that recognition that there is so much to learn from Indigenous peoples. We need to replace the, for some well-intentioned, but nonetheless paternalistic, paradigm that we must create special programs to help these ‘disadvantaged’ peoples with the realisation that they have so much to offer to help us to heal our divided, disassociated, dislocated and dissatisfied world. Decolonisation, along with de-misongynation, will give us an opportunity to start to relieve the deep burdens of repressed guilt and trauma (on both sides) that have been holding humanity back for generations.

To my way of thinking, poetry, and the arts in general, can assist with this not through polemic, but by presenting comprehensive, non-binary, visions that are tough and honest, without alienating through self-righteousness, instead allowing all voices a chance to sit at the campfire together, in peace, to ‘tell our stories’, both difficult and joyful.

In fact, if the arts were more respected and supported, and artists challenged themselves to be truly artists and not just politicians or activists, they would double their value to their societies. They wouldn’t just have to be the deep insights by which we can appreciate the past, but valuable tools for people to engage with and reimagine the present.

They could help with the most intractable problem we have today, the fact that people of differing views don’t talk to each other, and so never have the opportunity to understand each other.

So perhaps our writing and other artforms can have a pro-active and useful role in the world today, without being caught up in partisan politics. And perhaps our creativity can help build a bridge across the divides of misunderstanding that separate us from each other. The arts can be an empathy bridge that allows people to remember their shared humanity, and from that place of commonality start listening to each other again. To allow us to see the goodness in each other and speak to each other from there. 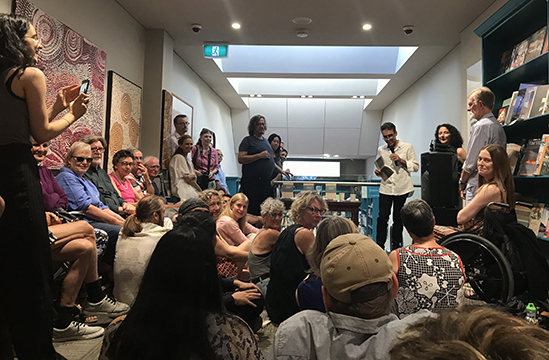 Book launch of The short story of you and I. Photo by Anne Casey. © The Physical TV Company