The Songs of Children, Guest Editorial by Geraldine Mills

Geraldine Mills is a poet and fiction writer. She has had four collections of poetry and three of short stories. Her short story collections have been taught at the University of Connecticut, Eastern Connecticut State University and Emerson College, Mass, USA summer programme.  She has won numerous awards for her fiction and poetry, including The Hennessy New Irish Writer Award and a Katherine Kavanagh Fellowship. She has been awarded two Arts Council bursaries. Her first children’s novel, Gold, was published by Little Island in 2016. She is a mentor with NUI Galway and is an online tutor in the short story with Creative Writing Ink. She is a member of Poetry Ireland Writers in Schools’ Scheme. She has just finished her next novel and is currently working on her fifth poetry collection. 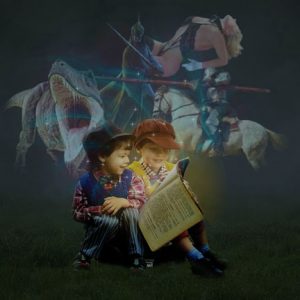 Up to the day she died, at the age of 93, my mother could recall many of the poems she had learned at school as a little girl. She recited them to us when we were of that age and then in turn to many of her grandchildren when they grew to appreciate the music of sound.

We knew them all, the one about a girl called Betty who fell off a chair at a party, or little Willie who was regularly quoted to us because when he woke up … ‘no grumbling was heard for he jumped out of bed as bright as a bird.’

The one I loved most of all was the one about the raindrop. As it dripped down the window pane it turned into a little man who proceeded to chase the other drops before him until they gathered in one large pool on the window sill. As she rhymed out the words, my mind’s eye could only see the tiny sparkling liquid man alive and talking to me, telling me I should be doing something with my day instead of staring at him. I always argued back that if he hadn’t made the day so dark, I would be out running through the fields.

Before she died, I asked her to write them out for me and I still have the blue-lined pages with her achingly familiar handwriting: that perfect cursive of her time. I have since passed them onto the next generation so they too can teach their own children when the time comes. She was my first teacher of the colour of words.

Albert Einstein once said that: Imagination is more important than knowledge. For knowledge is limited, whereas imagination embraces the entire world… Children never have to learn this. They are the consummate holders of the ability to form images. They come into the world with a blank page and write upon it whatever they wish. They play with language in the same way they play with rattles or balls: throwing words around, shaking them to see what noise they might produce. They become sound even before their tongues find a way around their first syllable.

They find poems everywhere. In the discovery of how their hands move, in the way the sunlight falls on a table, the chase of their own shadow. Later they love more than anything else the inherent poetry in nursery rhymes; I spy games, Imagination games.

Give them a word and they’ll take them on an adventure. They will take a ladder to the sky to bring down the wind. They will sail upon the sea of the kitchen tiles. A spoon, a pair of gloves, are all props for knights and scuba divers, astronauts. It is where poetry comes from.

One of the most satisfying jobs for me is tapping into that imagination. As part of Poetry Ireland’s Writers in Schools’ Scheme I get the opportunity to go around the country encouraging children from four years of age to eighteen, to expand whatever vast world of imagination they have within them.

I bring my bag of tricks and they cannot wait each week to see what I will pull from it. It is usually an object that they cannot easily recognise and upon which they will build a story. Once they understand that there is no right or wrong way to respond, that their answer is as unique as their fingerprints, then it opens up a treasure trunk of all those undiscovered worlds and they are off. One tells me it’s a giant pear, for another it becomes a witch’s cottage; someone else will can see the old skin of a rattle snake, a leather belt, an overripe banana.

Children are people who live in a land where the seen and unseen happily live together. They understand the mysterious nature of writing. Take away the confines of a ruled copy and an eraser and they can take the story anywhere. Nothing gives me greater satisfaction than to see a child who has not shone academically to suddenly surprise themselves and their teachers (even more) with the stories they can conjure up. They grow in confidence and I have heard teachers tell me that it is the first time they realised that there was a well of untapped creativity within the child.

A teacher who continues to nurture that discovery releases the child into a magical world that helps them grow in esteem and armed with so many stories they can become anything they want.

Many countries have recognised the importance of fostering this part of the brain and from Australia to the USA there has been investment in having a Children’s Laureate. Ireland is no exception and our Laureate (Laureate na nÓg) has been in existence since 2010. According to its website, ‘it was established to engage young people with high quality literature and to underline the importance of children’s literature in our cultural and imaginative life.’ This year’s holder of the title, Sarah Crossan, is a very strong advocate for children’s poetry. It is her aim to encourage all children to write; to become the best poets they can be. She believes that by doing this it will sustain us, nurture us and help us survive.

She has seen for herself that young readers will embrace poetry if they’re given the chance. She is brimming with new ideas of how to encourage teachers and students to have a positive response to it. She is working with Irish poets and performance poets across the world, getting them into communities where children are more vulnerable. She aims to create a social media campaign where she gets well-known people in Irish culture to recite their favourite poems and talk about poetry.

One of her initiatives already has been the WeAreThePoets project. This was a partnership between the Republic of Ireland and Northern Ireland in the hope of encouraging children of all ages to use poetry as a way of expression.

And all across the world there are people diligently encouraging children to be creative. I know of one young teacher in Colorado who is passionate about doing this, in a school where children struggle with day-to-day living. She is the bread to their souls in the way school dinners nourish their little bodies. She is not alone in her commitment.

There are magazines, and blogs and websites all encouraging children and young people’s creativity. Under the superb aegis of Mark Ulyseas, Live Encounters is a perfect example of this commitment. To dedicate, not one, but two issues to the imagination of those special creators is inspired. With its beautifully produced photography it gives an outlet to so many children who would not normally get such a platform. It brings home to me the belief that that there is still light in this, sometimes, dark world where words are a devalued currency.

There is no more fitting way of celebrating its ninth birthday than with the songs of children. May it continue to grow and thrive.