Susan Condon, a native of Dublin, Ireland has started working on a new novel set in her home town. She was awarded a Certificate in Creative Writing from the National University of Ireland Maynooth. Her short stories have won numerous awards including first prize in the Jonathan Swift Creative Writing Award while others have been long-listed, on four occasions, in the RTÉ Guide/Penguin Short Story Competition. Publications include Ireland’s Own Anthology, My Weekly, Boyne Berries 22, Live Encounters, Flash Flood Journal, Spelk, Flash Fiction Magazine and The Flash Fiction Press. Susan blogs at: www.susancondon.wordpress.com.  You can find her on Twitter: @SusanCondon or check out her crime fiction reviews and interviews on www.writing.ie 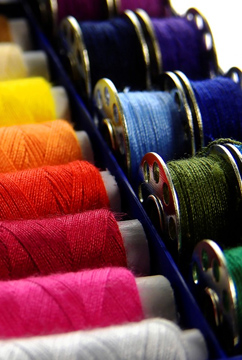 Entering Amy’s bedroom, I smile as watching my beautiful five-year-old daughter sleep. I extract the gnawed thumb from her mouth before planting a kiss on her fair head.

Earlier I cleared out the spare room, now; I can finally remove the cover from my grandmother’s sewing machine. It nestles within gleaming, worn oak, Singer emblazoned across the black metal body in faded gold lettering. My eyes scan down to the trellised pedal, before returning to rest on the silver needle – motionless, waiting patiently to resume working its magic.

I open the tiny drawer housed beneath and remove a worn silver bobbin. Positioning a spool of thread on the steel pin, I hold my breath as I flick the switch and press my foot gently on the pedal. The Singer hums. The bobbin fills with cerise pink thread. Threading the needle, I manoeuvre a scrap of material beneath the foot and practice running stitches until I have control of the pedal – like learning to drive.

In front of me, I’ve spread out coloured material, threads, tailors chalk, needles and pins. Tumbling backwards in time, I see my grandmother, her grey head bent in concentration. Pins protrude from her mouth as she uses a copy of the Irish Press newspaper to create patterns. She pins them to material, using chalk to trace an outline, before cutting each piece. Seams are joined together on the Singer while hems and fasteners are hand-sewn, with stitches so tiny they are nearly invisible.

Remnants from my mother’s dresses were transformed into miniature creations worthy of any fashion house. Judy and Mandy, my favourite dolls, had been the best dressed in all of Ireland. Their evening gowns had been worthy of Jackie Onasis – especially the year the O’Hara’s had moved in across the street!

I smile, remembering my seven year old friend, Jennifer, as she emerged from her house with her communion dress trailing behind her. While everyone else had short, plain dresses when we made our First Holy Communion that May, Jennifer’s had been a long affair with lots of frills and lace that we all envied. We had been so excited when we were allowed to wear our dresses again to mass each Sunday. Then, for the Corpus Christi procession in June, we had been able to wear our dress and veil again. The priests and altar boys walked in front, brandishing a statue of Our Lady. We, like miniature brides, paraded behind. Our ringlets bobbed up and down as our small hands scattered a myriad of rose petals, stolen from neighbours’ gardens, along the way.

We had all oohed and aahed when Jennifer told us she was allowed to cut it up.

“Sure, I’ll never get to wear it again, it’s too tight anyway,” she giggled, waving her scissors in the air.

No-one wanted to be first, but as soon as Jennifer began to cut every scissors followed in quick succession. For hours, we cut, pinned, sewed, and laughed. There was no fighting or bickering that day and when we were called for tea, we all helped Jennifer to squash the remaining pieces of material into her vanity case before heading home.

As I cut the Sunday Independent into patterns and hope that Amy will be delighted with Barbie’s new wardrobe, I can still hear the screech from Jennifer’s mother.

Her voice, becomes even louder and shriller.

“Just wait ‘til your father gets home!”

We had all walked home faster that day, head down, praying …