The Making of Fourth Floor Flat – 44 Cantos by Terry McDonagh 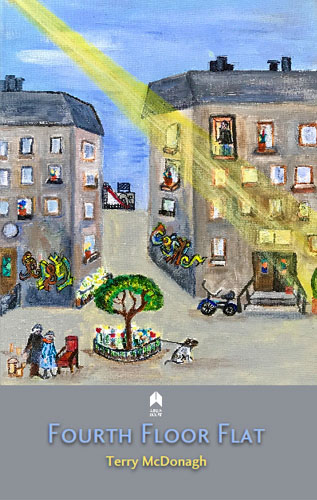 Just the other day I was forced to think long and hard when asked about experiences, situations or inspiration that lead to the making of a book of poetry. I replied that for me writing was a process that begins with an idea and gradually grows into a collection of poems – which was an okay answer but certainly not the full story. Far from it.

Later that day in a quiet moment, it came to me that the writing of a poem is an impulse that seems to grow out of a situation, a story or an experience. It can often be a throwaway phrase, a line that I read or a snipped from a conversation. The beginning is often unclear – even to myself – but it gradually grows, ferments and finds its way on to a page as a draft and sometimes as a completed poem. But the abiding question will always remain: where does that impulse, idea or story begin? Where does it come from?

It certainly does not begin when and where I want it to – it seems to come crawling up at me out of the depth of childhood stories and generations of old wisdom. It’s as if past present and future merge, unite and surround me in a rich mantle of colourful words. The good thing about poetry – like good music – it can’t really be explained. It comes in flashes – it is something spiritual – moments to be experienced for their own sakes.

This collection, Fourth Floor Flat, began as a short story. The essence of the story was that the individual is very much alone, even when well integrated and leading a balanced, contented private life. We are born alone and we leave life alone and in between these two defining moments, we live in a room, a house, a space we would usually refer to as home – in this collection, it’s a Fourth Floor Flat. For me this person in this flat is a metaphor for the unique and special state of the individual, as well as for the universality of the human condition in a more general way.

In our Fourth Floor Flat, we create happy and chaotic moments. We succeed and we fail. In the midst of all of this passing time, we think and we breathe. Think we must and think we do. We must breathe to live and we must think to be human. To avoid thinking is not an option.

When I had completed a draft of this story, I realized it was not something people would want to read – it was boring and long-winded. I realized we think in fits and starts and rarely in long, logical sentences. With this in mind, I began writing again but, this time I was concentrating on splashing images and pictures onto the page. Thus began one long poem in 44 Cantos or stanzas.

The protagonist in this collection shares his fears, failures, joys, aspirations and experiences with us. He is our Everyman and we have the opportunity to participate in his life and to possibly see aspects of ourselves in this participation.

I’ve chosen this longer poem, Time Span, to share with you because it deals with feelings of helplessness in the face of passing time. Toward the end of the poem, I refer to an older couple who could no longer manage the stairs. I knew them well. Their two children had grown up and gone their own way and they had no option but to find a ground-floor space. They were sad leaving and so was I. They had so much to tell.

Time is a floating shadow
for some – for others, it
means early or late when
you could be left sitting
on your tree-stump
as confused as a crocodile on ice.


My friend, Mouse is happy
with crumbs – with me
on the sports page
my fingers stroking my chin
my mind humming
the fresh air of then,
singing to the feel of now.

The buildings across this street
don’t speak my language,
yet they tell me of those
who have drawn a bridge
from then till now. Past,
present, future. Family nests.


I close my eyes to see
a new generations bursting
through walls, charging
this way and that to avoid
the beaten track. The old sit
on their balconies for a
season before making way
for fresh blood hiking up
the centre of the street
in the spirit of new shops.


There’s that circle again.
Children find new names
for footballers. Dads join in
for a decade and mothers
gather up tears in their stride.
Light, kindling on the horizon,
bewilders for its time – then
gradually draws and burns out.
Sun peeps through rain and
smiles on cold pavements.
Trees soak up wet. Plants shed
and die. I cannot hear the voices
of the past but I know they’re there
in crannies. Bedclothes drape
over balconies. Branches of families
reach out to far beyond.


An ancient warrior is a dead person.
Dead is dead as long as it’s allowed
to be dead. Some, not forgotten,
have their song emblazoned in
the brick and fabric of this street.
It is my street too. I own it with
my eyes. I’ve got a winged horse
on my balcony and a promise of
dry land on the far horizon. My
universe embraces me where I am.
This morning, an elderly couple –
two floors
down –
told me they could no longer
manage the stairs.
They’d be moving to a home
in a greenbelt. Time to go, they said,
picking up their coats, weeping down
every last step for the last time.

Two hours later a furniture truck parked
and a young couple could be heard laughing.
It was a healthy laugh. They didn’t realize
they were about to trample on a lifespan.

I see the old couple at the edge of a forest
wondering which way to turn for home.
I like the image, somehow, but it is a sad like.

The sun rises and sets but
it won’t let us in on its secrets.