Environment of Language: A review of  berni m janssen’s between wind and water
by Javant Biarujia  Spinifex 2018

Javant Biarujia is an award-winning poet, essayist and playwright whose works have appeared in print and in online literary magazines and anthologies in Australia, Japan, Europe and America. He has appeared in twenty anthologies in Australia and America, including Penguin’s anthology of Australian poets and Turnrow’s anthology of Australian poets, edited by John Kinsella, published seven volumes of poetry, with the most recent being “Spelter to Pewter”, Cordite Books (2016), as well as numerous chapbooks. He also translates from French and Indonesian into English, having translated Arthur Rimbaud and several East Timorese poets. From 1981 to 1996, he edited a small press devoted to writers on the margins, including an AIDS diary by Charles Roberts. His lifelong project has been Taneraic, a constructed artistic language. He currently lives in Melbourne. 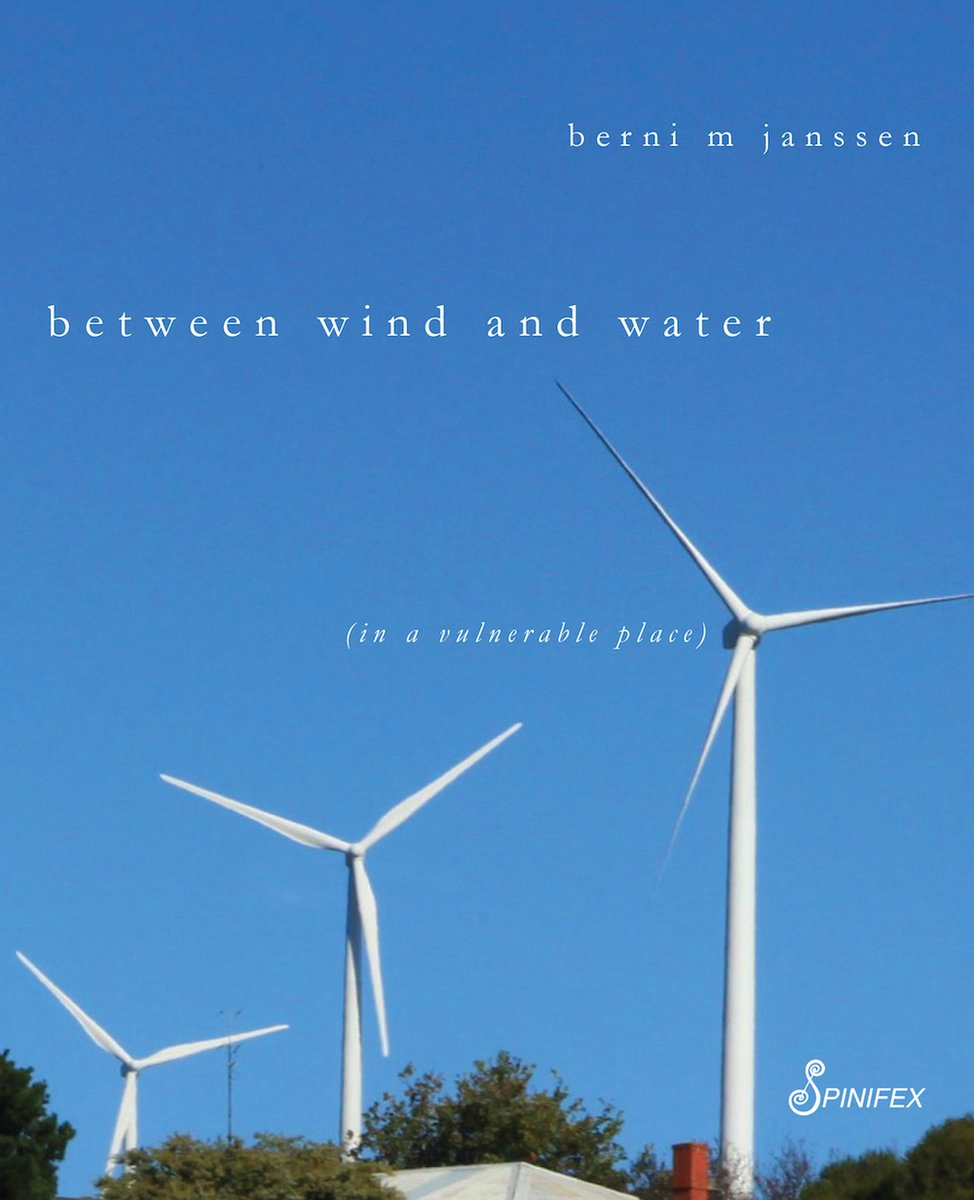 What an extraordinary book! This is, to my knowledge, the first book-length poetical response to the contentiously medical impact of wind turbines: “between wind and water” (with the subtitle “in a vulnerable place”) could be a poet’s rendering of the expression “between a rock and a hard place”; that is, being in a difficult situation. Having said that, politics and poetry rarely mix in societies like Australia that have never known the ravages of war, revolution, murderous oppression or mortal strife or struggle, for the former relies on appealing directly to the emotions, obfuscation and lies (of which there are plenty), while the latter relies on ambiguity, reflection and rhythm — while both profit from repetition, hubris and story-telling. The thing about politics is, it is ephemeral and most politicians, forgettable, whereas poetry — not politics — is history, memory (“mammary memories”), “all breathing passion [where] ‘Beauty is truth, truth beauty,’ — that is all / Ye […] need to know”*. In this way, berni m janssen gives a voice to those who are voiceless, those who are not believed, she writes a protest poetry where the truth will out. Justitiae partes sunt non violare homines (Cicero: “Justice consists in doing no injury to men”).

Australia’s colonial struggle is set against an indigenous backdrop. What started out as a heroic struggle against the elements turned soon enough into exploitation, greed and murder (“desecrate destroy and plunder”). The “civilised world” is anything but civilised, our patriarchal society knows best, it would seem.

The book is divided into five sections (STILL, TURN, SPIN, TORQUE and TILT): a species of “spin” is “torque”, itself a homophone of “talk”; “tilt” is a quixotic acknowledgement of Cervantes; and “still” is such an ambiguous word which can mean, as an adjective, a synonym for “tranquil” or, as an adverb, “yet” (ignoring its use as a noun). Language is sometimes thinly disguised (“a roo ral lamming Tay shun”, and “watt hertz” are the first two, paronomastic, words of “what hurts”), though sometimes janssen is explicit. To achieve her end, she employs internal rhyme (“walk/talk”, “she’s all a chatter, glasses clatter”,“noise/annoys”, etc.), symbolism, thieves’ cant, lists of native fauna and flora in italics, cooking ingredients, technopaegnia, postmodern and poststructural conceits, as well as portraits of locals (“Dan and Gaby” with Dan’s seasonal notes, “Mitzi and George” with a Steinian stutter, “Angie and Conrad” in their panic, “Fay” speaking volumes in four columns of tiny print, “Vera” with her Voltairean garden, “Jack” whose silence has been bought, “Daphne and Ted” on the land for decades, “Fern” with her lament, “Mattie” with her “desire for sleep embedded / state twitched pickled squeezed / succour sucker been suckered”, “Cassandra” with her mythical “not prophecy”, “Leon” with his technopaegnic ballon d’essai, “Charles and Una” tempted by an alternative to drought — can you blame anyone for wanting to earn a living?, “Dusty and Lou” with their dreams shattered, and “Evan” duped by false promises. Poems employ textual patterns (the use of bolding, italics, lower case, etc.), a scatter field, technopaegnia, waves as undulations (wavelengths), etc. While janssen is describing Dja Dja Wurrung country, she could be meditating on any drought-affected (that is “vulnerable”, a word used in janssen’s subtitle) geography along the Eastern seaboard (water as sea).

Sound (noise) is the epistemology of a poet, not least a sound poet like janssen. “A silence / that is not silence”, “Imagine a noise you cannot hear”, these are the disturbing sound poems contrapuntal to the breathing she speaks of: the poetry of speaking, not speaking, saying what must be said against silence in case vested interests are negatively affected. The poetics of spin (“talks discussions chats”, “Fay speaks of spin”) and the clash of private and public space against the susurrations of protest, the essence of breathing (“a shimmering breath” in the very first poem), human dreaming (not nightmare: the dream of building a world in which one can live).

Water is just as fundamental as air for life, a site for real and mythical creatures, mirages (mirrors, reflection), islands, growth. Water, like humans, can be dangerous or treacherous (drowning, flooding, waters of the abyss, etc.), but it can also aid humans in their creativity, as in painting, ceremony or in play. It can be solid or flow, as in rivers and oceans, or it can be motionless, still, as in dams, puddles, ponds or lakes (janssen’s previous poetry collection was titled Lake & Vale). It can indicate the source (fountain-head) or the boundary (shore). It can be life-saving rain. Water represents the flesh (corporeal), while wind, the spirit (incorporeal) — for the poet, the choice between wind and water (nature) is always metaphysical. Weeping is not too far from water, but it is not found here — janssen and the others in her poems are too stalwart for that. Of course, janssen here is alluding, in the ambagious and elliptical course of poetry, to power.

Puns as a linguistic technique are not to be avoided (fact check/fat cheque; indeed, American spelling does not differentiate between the two “checks”). Proverbs from around the globe, imparting their own wisdom on the subject of wind and serving to show how universal our experience is, dot this book, from Europe to China to the Pacific Ocean, ending on an ominous biblical note of reaping and sowing. “Wind” (air) and “water” are two of the four elements, but wind is seen negatively in these proverbs (“Eat the wind and swallow bitterness” is one such Portuguese proverb), while “bag of wind”, that is, a “windbag” is the subtitle to “Troy”, who is a representative from The Company “listen[ing] to your concerns”.

As Lawrence Ferlinghetti said (himself a poet and editor at City Lights Books), the “function of the independent press (besides being essentially dissident) is still to discover, to find the new voices and give voice to them”. Spinifex continues this tradition, and janssen continues the tradition of some of Australia’s best contemporary poets, like joanne burns, Ania Walwicz, Ali Cobby Eckermann, Mark Young, Chris Edwards, John Kinsella, Gig Ryan, Jordie Albiston, Ken Bolton, Michael Farrell, Chris Mann (recently deceased), Francesca Jurate Sasnaitis, Cecilia White and so many others. This is an important book beautifully produced by Spinifex, who used a terrific photograph by artist Gunther Wilhelm on the cover. It is bound to confuse if not upset the bureaucrats and those with vested interests, for while they may understand janssen’s cri de coeur generally, I doubt they will understand the poetry; they may recognise that between wind and water is a cautionary tale, but they will fail to see how.