John W. Sexton was born in 1958 and is the author of five previous poetry collections: The Prince’s Brief Career, Foreword by Nuala Ní Dhomhnaill, (Cairn Mountain Press, 1995), Shadows Bloom / Scáthanna Faoi Bhláth, a book of haiku with translations into Irish by Gabriel Rosenstock (Doghouse, 2004), Vortex (Doghouse, 2005), Petit Mal (Revival Press 2009), and The Offspring of the Moon (Salmon Poetry 2013). He also created and wrote The Ivory Tower for RTE radio, which ran to over one hundred half-hour episodes. His novels based on this series, The Johnny Coffin Diaries and Johnny Coffin School-Dazed are both published by The O’Brien Press and have been translated into Italian and Serbian. Under the ironic pseudonym of Sex W. Johnston he has recorded an album with legendary Stranglers frontman, Hugh Cornwell, entitled Sons of Shiva, which has been released on Track Records. He is a past nominee for The Hennessy Literary Award and his poem The Green Owl won the Listowel Poetry Prize 2007. In 2007 he was awarded a Patrick and Katherine Kavanagh Fellowship in Poetry. His poem “In and Out of Their Heads”, from The Offspring of the Moon, was selected for The Forward Book of Poetry 2014. He is also the changeling-other of the blog-poet Jack Brae Curtingstall. 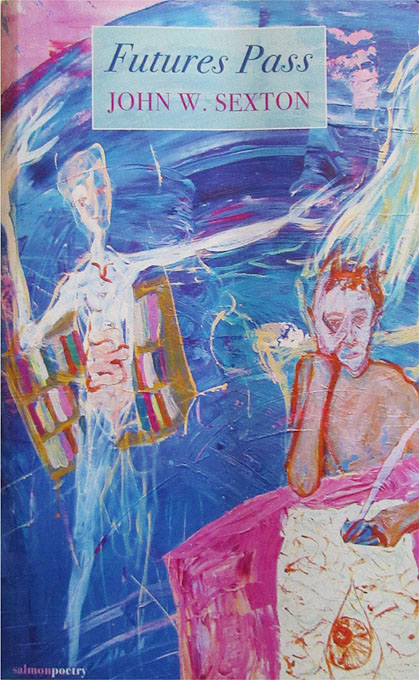 Just the other day I awoke from a dream wherein St. Thomas Aquinas was speaking to me. I wrote to a dear friend in the Vatican and asked for some guidance so that I could begin the journey on discovering his works. And as I embarked on a new path in search of Aquinas’ works, a book arrived in the post – Futures Pass by John W Sexton, and in it I discovered a poem Final Moments of Thomas Aquinas, March 7th 1274.

Coincidence or a message for me, the reader? I cannot tell. But the words of the poet are indeed semina verbi*.  Truly the Word is Maya** and from Maya comes life. And the pathfinders of this Life are the poets for they see, hear and feel outside the senses, and without them we are all sense less to the beauty around us.

In Futures Pass time flits from poem to poem and yet returns to a present tense as if there is an unseen thread that ties all together.  A word here, a phrase there and a thought deliberately misplaced ricochet in the reader’s mind and urges one to venture further into the engaging verse.

I was wearing a coat of rain and feathers
that I’d bought from the clouds before money was dry;
my pockets were full of almonds and birdsong
and my name was the answer I don’t know why;
the lane that I walked was a ribbon of moonlight
and my shadow was blue as a summer’s sky


My mind was not heavy or burdened with worry
I carried no troubles to make me cry;
my heart was full of rivers and laughter
and my name was the answer I don’t know why;
the lane that walked was a ribbon of moonlight
deep as the ocean when the ocean is high


And as we weave our way through the book it becomes evident that we are in a gallery of graffiti of thoughts and images jostling for space, comprehension and attention.  Patience is all that is essential to flip from Michael Jackson, Neda Agha-Soltan’s piano, Famous Mice to Harold Norse at the Purple-Loosestrife Hotel. The poet’s deft handling of word and verse is evident in this excerpt from The Troubled Nights of Li Po.

Lately the dead have been haunting the clouds
of his sleep, forming like a fog in the chipped
jar of his head. There’s a pattern of owls
on his porcelain skin as he sleeps. Sky
is the thing he breathes out. On his head pines
are his scented hair.


The wretchedness of the artist, Gauguin, in Tahitian environs is brutally exposed in Hidden Beneath the Paint Since 1892. The feelings of grotesqueness is sliced like salami into words and served in a manner that leaves no room for kind thought. It forces one to contemplate the question of morality and the artist. The demarcation of beauty and a compelling sadism.

Too much arsenic just made him cough
so he gave it up to syphilis:
the spirit of the dead keeps watch…

His thirteen-year-old bride pissing
herself in fear, sheets in the catch….

Futures Pass by John W. Sexton is a seminal book of verse with flickers of pure madness for it touches the nerve ends of one’s thoughts.

A must buy. A must read.

*Semina Verbi, Seeds of the Word
**Maya, Sanskrit for illusion.