Nguyen Van Tho,Vietnamese Author and ex-Viet Cong soldier, in a candid interview with Mark Ulyseas,
over a cup of rice wine and a bowl of litches at his home in Hanoi.

This interview was conducted with the help of a translator. I hope nothing has been lost in translation.

The 20th century was perhaps the bloodiest in the history of Vietnam. 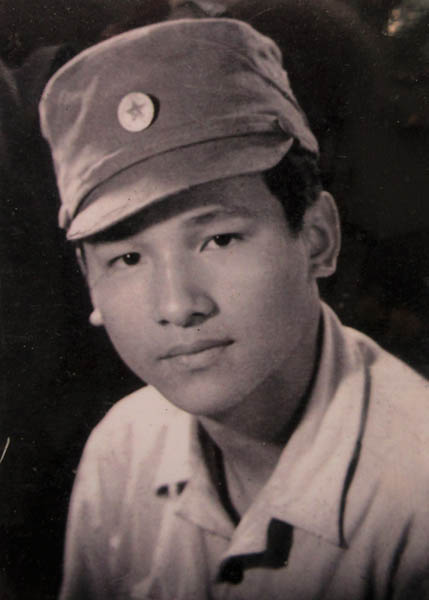 I was born in Thai Binh Province, in 1948. I studied at The University of Commerce and Economy in Hanoi. In 1965, at the age of 17, I joined the army and fought in the war.

I learned to use many types of guns, including anti-aircraft while on duty protecting the city of Hanoi and surrounding areas.

Three of my older brothers died of disease during the war. I, being the fourth child who survived sickness, was named ‘Tho’, which means ‘to live forever’ in Vietnamese.

Most of my friends died in the conflict.

(Breaks down and cries)

When I got married, and when I became the father of a beautiful baby girl…every night whenever I slept I dreamt of the war…the blood, my dead friends, and I became scared…I could not sleep with my wife.

Now I am married for the third time.
I live with my third wife here in Hanoi.

My daughter, from my first marriage, is called Trang.
She is now 40 years old.

Why do you write?

When did you begin writing?

In 1985 I watched a drama on television. It was a story about a man who returns from active service in the army and how he faced hurdles attempting to adapt to a normal life. But this was not real. There was no reality… it was missing, the drama was not real. And this was the reason why I began writing because I wanted to convey the ‘reality’ I lived through.

My first short story was about a young soldier who is wounded. He manages to get to the hospital but the only doctor there had been killed by the enemy. He witnesses the desperation of the situation…bloody bodies lying unattended…breathing and crying in great pain. The young soldier writes to his mother telling her that he cannot return to Hanoi because he can’t take the killing. And later, he died of his wounds in hospital. He never told his mother that he had been wounded.

His mother still keeps his letter and often she opens to re-read it, hoping and praying that her son will return one day.

(Breaks down and cries)

Many of us joined the army because we wanted to protect our land from invaders – the Americans. I fought the US marines in many towns and today I still recall where my friends died, where their blood was spilled in the rice fields and little villages. This is my living memory.

At present, there are many American expats living in my neighbourhood, yes white Americans. I talk to them. I have no hate, just sorrow.

I worked in Hanoi for a number of years and after that migrated to Germany in 1988.

Vietnam and Germany, then it was (East Germany), had an agreement that Vietnamese could seek employment in Germany. (Reunification of Germany was in 1990.)

Here I published my first anthology of short stories titled Old Gold. The stories are about Vietnamese living in Berlin and about the Vietnam War.

I shall outline one story about how a former US marine (Vietnam Vet) meets a former Viet Cong soldier in Germany:

One day an American entered the Vietnamese place of work and arrogantly placed an American flag on his counter. On another visit the American comes to know that he is Vietnamese.

The Vietnamese after much exchange of information realises that the American was a soldier he had fought in Da Nang during the war. The marine shows his scar of a bullet wound received when the Vietnamese had shot him. And the Vietnamese showed the scar on his hand from a bullet which the marine had fired.

The marine told him that after the war he had come to Germany and married a lovely German girl and settled own.

From then on the American and his German wife helped his former enemy and his family. Often they would drink wine – a special wine – German wine with Indian spices – and talk about food and exchange stories of each other’s lives and country.

The short story is titled ‘The Scar’.

So are these short stories fact or fiction?

Fact. I am the Vietnamese in The Scar.

How did the Germans treat the Vietnamese?

There were two types of Germans. One type treated us very well, helped us in many ways. The other type didn’t like us. They set fire to our homes, beat us and abused us in the streets.

What happened when you first arrived in Germany?

My first six months in Germany, I didn’t go to the market. I had very little money. I wrote. I wrote many short stories even though I was very poor. I wrote fifty short stories and two novels.

The first novel – Quyen – is about Vietnamese in Germany. This was made into a film.

The second novel, I am writing. Not finished…I have been writing for five years…nearly 700 pages.

What is the role of the writer?

To show people the way to peace. That war is not the solution.

We cannot use guns, weapons to solve violence. Unfortunately, this is why war happens in small countries because we are constantly under threat from forces wanting to control us.

Presently, much depends on the Pacific situation. The South China Sea.
Each country must protect itself.
This is the reality.

But we can talk. And talk doesn’t need weapons.

What is your view of contemporary Vietnamese writing?

The tendency is to write on the political. But I think this direction is not good. A writer must remain outside the political sphere. Outside, above, beyond politics…to be able to see humanity.

What does Hanoi mean to you?

I grew up in Hanoi.

I studied in Hanoi.

I fought the enemy to protect Hanoi.

This is my home.

When I go far away from Hanoi I miss the simple things…like the sound of fallen leaves being blown by the wind…the rustling of leaves in the trees…the small rain drops falling on my shoulders during the Tet festival…and how people exchange presents on this occasion.

(He reaches for two books, signs them, and then hands the books to me in all humbleness).

I want to give you these two books written by me: 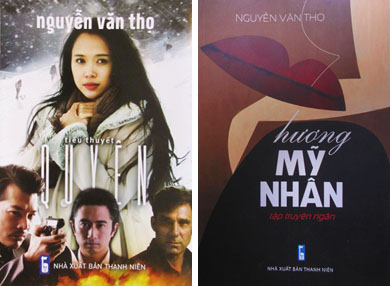 Quyen – a novel
This novel is the story of a Hanoi girl named Quyen who is well-educated, beautiful and has a pleasant personality. She leaves Vietnam and migrates to Germany hoping for a better life. She faces challenges, and suffers many indignities. Through the painful life of Quyen, the writer presents the dismal life of Vietnamese expats in Germany.

Huong My nhan – Fragrance of beautiful a woman – anthology of short stories
The anthology features fifty stories of life in Germany, Hanoi, the war and post-war.

What do you think about the young generation of Vietnamese?

In my childhood I remember that whenever I returned from school I would go straight to the kitchen but the only food available was corn. My mother was very strict and though I didn’t like corn I had to eat it.

Youngsters today have all the resources and opportunities for development. My generation gave this to them. My friends died to give them this land, free from invaders. They must look to our generation for guidance.

I want to ask you, Mark, do Indians still love Mahatma Gandhi?

Yes, millions do, I answer, but many of us are moving away from his teachings especially that of non-violence. Tho, you look like the Mahatma.

So how do you spend your time?

I wake up every morning at 3 and read books. Before I became a writer I read books for ten years.
Today I like reading books on history of Vietnam, India, USA, and Germany etc.

Do you have hate in your heart for the enemy considering the number of bombs dropped on your country and the after effects of the chemical, Agent Orange?

What is your message to the world?

All my life I realized that the destiny of every human being always depends on the destiny of a nation, a country; especially a small country. Therefore, I feel that each person can be a grain of sand to build the fortress that is the country. Many politicians in big countries always work for the interests of their own people, regardless of the fate of people in small countries. So small countries like Vietnam, Thailand, Laos, Cambodia, and those in the Middle East, etc., must be linked together along with countries like India, to form a power block against these powerful forces to prevent them from trampling the small nations for their own selfish interests.

Tho climbed onto the roof and broke some star fruit from a tree and handed it to me saying, ‘You are lucky, these are the first fruit of the season’. I thanked him and departed.

As I walked back to my B & B through the narrow streets clutching his books in my hands, I couldn’t help thinking about the futility of war and the resilience of Vietnamese like Tho who have kept the faith that peace is the only way forward.

Nguyen Van Tho hopes that an international publisher would have his books translated into English and published so that the world may get to read his works.