Robert Jensen is a professor in the School of Journalism at the University of Texas at Austin and the author of The End of Patriarchy: Radical Feminism for Men. He can be reached at rjensen@austin.utexas.edu or online at http://robertwjensen.org/. 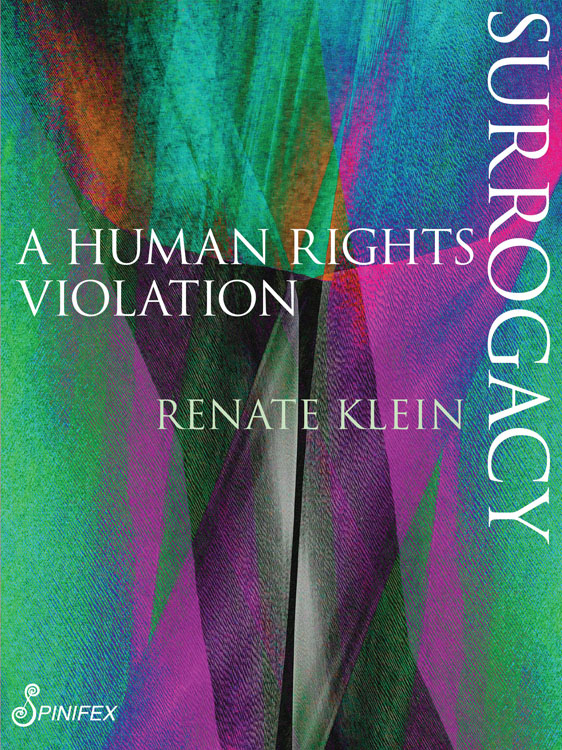 Reading Renate Klein’s elegantly argued Surrogacy: A Human Rights Violation, it’s difficult not to keep repeating to oneself, “How did we get here?”, all the while trying to keep at bay a sense of despair.

“Here” is an allegedly civilized world in which treating a woman’s body as a commodity is regarded in polite liberal circles as not just acceptable but a sign of being progressive. Klein’s analysis of surrogacy focuses on the renting of women’s wombs, what she and others appropriately describe as “reproductive prostitution.” The term reminds us that many liberals also endorse “regular’ prostitution, men’s use of objectified female bodies for sexual pleasure.

How did we get to the point where this reduction of women to bodies is accepted and even celebrated—not only among many men but also many women, even among some feminists?

Klein’s Surrogacy, the third book in the new Spinifex Shorts series, reminds us that these social practices are the core of patriarchy: Men’s claims of ownership and/or control over women’s reproductive power and sexuality. Times have changed in sex/gender politics—largely for the better, because of feminism—but patriarchy has proved remarkably adaptable and resilient. It’s difficult to imagine anyone reading Klein’s book and ignoring a radical feminist critique of these patriarchal practices, yet much of the allegedly civilized world does exactly that—embracing a capitalist liberal/libertarian dogma that focuses on decontextualized choices. From the liberal perspective, when poor and vulnerable women “choose” to rent their bodies in this dangerous and dehumanizing practice, no further analysis is necessary.

Klein will brook none of these evasions. Near the end of the book, she puts it bluntly:

“new reproductive technologies are used to literally ‘cut up’ real live women into our eggs and wombs, treat us with invasive dangerous hormonal drug cocktails, and, in surrogacy, psychologically manipulate us to believe the myth that gestating a baby without a genetic connection will not cause us to feel any attachment, and hence these ‘surrogate’ babies are not our ‘real’ children. This man-made compartmentalising ideology creates Test-Tube Women. The idea is that ‘playing God’ (as 1980s critics of reprotechs were wont to say) continues the 6,000 years of patriarchal domination of women in which two points were, and are, central: One, men cannot gestate life and give birth to children (necessary to continue the species Homo sapiens). Two, men as a social group loathe women and our bodies for this power. Conversely, when women ‘fail’ to reproduce, the disdain expressed is stark.” (p. 161)

Klein’s rejection of this compartmentalizing—a function not only of patriarchy but white supremacy and First-World imperialism, capitalism, and the worship of high technology—feels like a simple plea for our collective humanity, for seeing each other as fully human and not as things. That Klein’s book is so desperately needed signals how far we are from such basic values.

Klein’s definition of surrogacy reflects those basic values: “Pared down to cold hard facts, surrogacy is the commissioning/buying/renting of a woman into whose womb an embryo is inserted and who thus becomes a ‘breeder’ for a third party.” (p. 5)

Key observations and insights that Klein’s book provides include:

Klein, a co-founder of the Australian feminist press Spinifex that published the book, has decades of experience in teaching and research, with expertise in health/biology and social theory, as well as feminist activism. The breadth and depth of her knowledge and experience is evidenced throughout the book, as she moves easily between technical scientific details, moral philosophy, legislative proposals, and organizing strategy. [Disclaimer: I have published a book with Spinifex, which Klein edited and in that process I acquired first-hand knowledge of her considerable intellectual abilities.]

But most for me, the distinctive feature of the book is Klein’s compassion for people on all sides of the issue. When arguing for political positions we hold passionately, it’s all too easy to valorize our side and demonize opponents. But even when Klein writes with an honest understanding of why some women may be on the other side, she doesn’t hesitate to criticize sharply the profiteers who exploit without concern. But I finished the book feeling grateful for the way Klein models a humane approach to debating the subject.

But make no mistake, Klein doesn’t mince words in her analysis, asserting that surrogates “are reduced to incubators, to ovens, to suitcases. And the product child is a tradable commodity who of course has never consented to being a ‘take-away baby’: removed from their birth mother and given to strangers aka ‘intended parents’.” Returning to the parallel between surrogacy and prostitution, she drives home the common features of patriarchal practices:

“well-regulated sex (or fertility) industries, according to their promoters, create happy hookers (happy surrogates) and happy sex buyers (happy baby buyers). Pimps and brothel owners equal IVF clinics, surrogacy lawyers/brokers, pro-surrogacy advocacy groups, as well as surrogacy/egg ‘donor’ agencies. The difference is that apart from deeply harming women in both industries, the end ‘product’ in prostitution is a ‘faked girlfriend experience’, whereas in surrogacy it is the creation of new human beings: children.” (p. 3)

Klein’s willingness to take on these questions goes a long way to alleviating some of the sense of despair that comes with facing honestly the routine dehumanizing practices of the modern world. But the question lingering just below the surface of almost every page of the book—as well as just below the surface of many of the “normal” activities in our lives in the affluent sectors of the world— remains troubling: How far can people drift from being human animals before we stop being human beings?

By that, I mean that we are organic creatures, products of evolution like all others, with material bodies that we can’t transcend, no matter how much high-energy technology allows us to manipulate the rest of that material world and insulate ourselves from it. But the more we treat high-tech interventions such as surrogacy as routine and uncontroversial, the compartmentalization continues, making routine the exploitation of vulnerable people and widening the gap between people and the larger living world. Can we be truly human beings, in the moral sense, if we do not accept the limits that are imposed on all creatures by that larger world? Do we lose our own humanity when we lose are creaturely bearings to such a degree that we imagine that we can create life on our own through high-tech manipulation?

This concern is not rooted in science-fiction fears of humans becoming robots or robots taking over the world, but rather is a real concern for today. Yes, humans have long used technology, whether Stone Age or Space Age, but the differences in technology matter. Yes, humans have long tried to control natural processes and reshape ecosystems to our advantage, but that doesn’t mean we cannot ask critical questions about the assumptions behind, and implications of, each of the interventions we may want to attempt.

The fact that it is difficult to draw lines does not mean we abandon the obligation to draw them. For me, some of those lines have long been easy to draw: No decent society is possible if men rent women for sex. Klein’s powerful argument makes it just as clear that no decent society is possible if women are reduced to a womb that carries a fetus for the privileged. Social justice and ecological sustainability come together in one clear mandate: stop surrogacy now.