Review of Brian Kirk’s After The Fall, Salmon Poetry, 2018 – by Eamonn Lynskey

Eamonn Lynskey’s poetry first appeared in the New Irish Writing pages of the Irish Press in the 1980s, edited by David Marcus, and since then widely in magazines and journals such Poetry Ireland Review, Cyphers, The SHOp, Crannóg, The Stony Thursday Book, The Stinging Fly, Boyne Berries, Orbis, Riposte Broadsheet and the Irish Times. He was a finalist in the Strokestown International Poetry Competition and in the Hennessy Awards and has published two collections, Dispatches & Recollections (1998) and And Suddenly the Sun Again (2010). Lynskey’s third collection It’s Time was published by Salmon in 2017. He has been involved in the organization of poetry events in Dublin for many years and has presented poetry programmes on local radio. He obtained an M. Phil in Creative Writing from Trinity College Dublin in 2012 and participated in the 2013 Stanza Poetry Festival in St. Andrews in Scotland. Before retirement he worked as a teacher and Adult Education organizer.

Brian Kirk writes a poetry of the crafted line and the weighted word and these qualities are very evident in the title poem of the collection After the Fall, a passionate poem elegantly contained within a careful construct of short lines:

This choosing of the right form in which to enclose the thought continues throughout the book, laying before the reader the realities of living daily life where the ordinary is often displaced unexpectedly by the sudden appearance of the unusual. Two Foxes is such a poem, where the excitement of the unusual is captured, together with the realization of a wilder, hidden strata running beneath the monotony of daily events:

… and I knew I would never forget
the night we saw foxes on Barnsbury Road,
and remembered our love in the body,
the skin and the blood
on a wet London street.

It is a truism that all writers (especially, perhaps, poets?) are given to seeing around the corners of reality. The Barnsbury foxes, an indication of a hidden world, bring a poem like Larkin’s The Whitsun Weddings to mind, with its probing beneath the surface of an event the poet happens into by accident. There are many poems in this collection in which we are given not only the surface of things but the underlying hidden pulses as well. Poems like New Year and Leave Taking are what they say they are but are so much more. In the latter poem, for instance, we read about an elderly man visiting his neighbours’ houses for what he knows will be his last time. The poignancy that rises up through the matter-of-fact descriptions gives the poem its impact:

… he was feted by farmers and their wives
like one who’d been away at war for years,
wondering what his business could be now
beyond the final saying of goodbyes …

This is a poem of great humanity and understanding.

Careful lines and carefully chosen words are nowhere more apparent than in poems like Rotten Apples, Simple Vows and A Map. There is always something restful and magical for the eye in poems that make good use of space and a minimum of words. It is always a mystery how a little poem like Rotten Apples, so reminiscent of William Carlos Williams, can have such a big effect and is proof that, in poetry as elsewhere, very often ‘less is more’. Simple Vows is also well served by this economy of treatment:

Beyond the Hermitage I dreamed you close,
Among new leaves your smile was apple bright.

The long line is also used to very good effect. It is always difficult to pack lots of information into a poetic line without lapsing into prose and many pieces in the collection achieve this balance. ‘Balancing Act’ is a poem featuring the Irish urban/rural divide and is an example of the several poems that explore topics to the fore in our newspapers and in, as the phrase goes, the ‘political discourse’, of today’s Ireland:

My children are happy but urban and thin,
they speak with inquisitive irony
when describing the world as it is, real or virtual;
their futures mapped out before them … 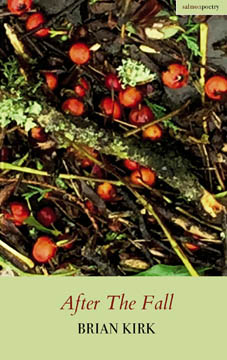 There are many other fine poems which could be discussed but Orienteering must be mentioned. This is a wise poem that speaks to those of us who have lived long enough to have ‘a past’ (in the sense of a lengthy series of regrets) and is a warning to those who have not yet accumulated too many years that there is a shape to the things that are to come, a shape which may not be very attractive:

… If you sketched
a map from memory
you’d maybe see
the broad outline
of staggering events,
or feel the smart
of tiny hurts
absurdly magnified
as you move away …

Again, craft is evident in the decision to eschew stanzas and deliver the poem in one continuous flow, rather like a thought that comes, makes its presence felt and then goes away. Again, the choice of form is just right and, as becomes apparent as one reads through the book, this poet is comfortable with many different forms: sonnet, single couplet, formal stanza, the cascading line.

For anyone who likes a poetry of the well-chosen word and the economic line, Brian Kirk’s collection ‘After the Fall’ will fit the bill. Nor does he come up short on the unexpected and the lyrical (‘The bright talk of past days / unspools to slurs’). This short review cannot do justice to this fine collection. It is a book that will lure a reader back again to have another look. And this surely is the ultimate accolade?