Experiment in Space 91, a short short story by Jim Meirose

Jim Meirose‘s work has appeared in numerous magazines and journals, including Calliope, Offbeat/Quirky (Journal of Exp. Fiction pub,), Permafrost, North Atlantic Review, Blueline, Witness, and Xavier Review, and has been nominated for several awards. His E-book “Inferno” is available from Amazon.  Underground Voices.  His novels, “Mount Everest” and “Eli the Rat”, are available from Amazon. “Mount Everest” has been adapted to a play by a leading west coast playwright. Click www.jimmeirose.com to know more. 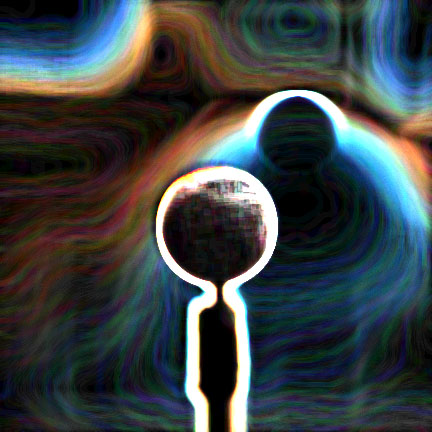 Three a.m. rain pounded the tent all full of pitch black. The sheets of rain sweeping across the canvas, and the wind roaring over past the canvas, made going out impossible. They decided hours ago they would stay in the tent and stick it out, until morning; stick it out.

The singing started at one a.m. soft at first, then louder, louder—

No. I didn’t know that. That’s a lousy old song nobody sings or plays today.

Wait a minute. Don’t laugh at a guy for how they look—

Todd’s eight years dead now.  Dotty his wife’s dead 15 years—all skinny and lumpy and dead. Art looks almost alive—his tongue sticks out a little, but he doesn’t really care. He drooled when alive too, near the end. Each time I hear, ra da da da da, Chanson, chanson, d’amour, I think of their corpses and how they must look. They played the Chapman Park Hotel—I can just hear the smoky sax solo; Ra da da da da, the smoky sax solo smokes on winding about that old moldy lounge. Then ERA records picked up the song 1958, it was #6—

Oh yeah, a number? Hey, I got a number. Teatime for Moskvin, and 28 dug up dried out little dead girls. In interviews with police, Moskvin gave various explanations of his actions. All his actions to get his little pretty mummies, with plastic mask faces, with black holes for eyes, all rotten inside. Funny!

Say wait—how come you gave me hell about making fun of the dead?  You hypocrite! But, listen; that song is great. Chanson d’amour, ra da da da da, play encore. Forget the dead girls. Imagine the lounge circuit, the heavy smelly moldy curtains, and the wonderful dreadful rainy and windy dark days? All full of Here in my heart, ra da da da da, on and on—

Listen—back up. I talk about Moskvin, because I can talk about anything I want. Songs are nothing. Things like pasty faced propped up dead girls around the table, now; that’s something. They had tea every day and watched and waited for science to find ways for these girls to live again.  Death’s not unlike sleeping. The morning always comes, you know?

Hey, that might be cool, but wait; listen—you know Manhattan transfer? That awful whiny glittery group named for Dos Passos’ book? Well, the Transfer singer sounded just like Piaf. Chanson d’amour, ra da da da da, play encore. Heavenly, just heavenly. Piaf’s 52 years dead now, dead and rotting in the ground. All the old dead people in the ground, that song all around winding them more and more, creepy; but that song got to #16 on billboard, see; how long they’ve been dead is a number, where their song got to is a number, everything always starts with numbers, one fuck, one egg, one sperm, one baby—babies come from numbers. Hah!

What are you fucking talking about? Babies? Numbers? We’re in a God damned pitch black roaring windy pounding rainy tent, there’s no babies or numbers here.

I know, I know, but you know what else? I once saw a poster on a pole. Il Novo, live from Pompeii, it said. Book tickets now, book tickets now. Now, who the fuck does this poster think is going to go all the way to Pompeii, because they see one little black and white poster? Like, who goes and buys Coke because they see a commercial? That’s something too! Everybody in the world drinks Coke anyway! They don’t need commercials at all! What a waste.

Yeah, right, tell me about it. The money gets pissed into the TV, but, anyway, let me get to the point. That great old song even got sung in the Fillmore East; it started as the Yiddish theatre in 1925; then became the Commodore Theatre; then became Leows Commodore—then, in 1968, the Fillmore East. Haw! Chanson d’amour, ra da da da da, play encore. Amazing isn’t it, the song, the labels, the singers, the venue all converged together unknowing until the moment the Transfer sang Shanklin’s great song at the Fillmore in May 1971?  Some damned rotting corpse in the ground wrote it, and they sang it there! Everybody had lived and died but the song went on and everything collided at the Fillmore. Funny! Chanson d’amour, ra da da da da, play encore. But, it never made Pompeii. In Pompeii, there’s just casts of dead people all over the place. They don’t play music there. They’ve respect for the dead.

Oh, yeah, I’ve seen those bodies, they all died suffering, but they’re not real mummies. They’re just plaster casts. Now, Moskvin wanted to make real mummies.  How long dead they looked, one day, more longer, every day deader, and he just sat there waiting. Imagine it?

No, no, we’re not dead and it can’t rain forever. It’s got to stop by morning. Then we got to see what’s what. Now, Moskvin’s girls, they were dead. Why can’t you keep track of this conversation, it’s about Moskvin, his girls, tea parties, Pompeii—he told the police how he carefully selected which girl to take from the cemetery.

I lay on the grave and tried to get in touch with her, he told them.

I  listened to what she said.

Stop! Stop all this Moskvin talk. You bore me; don’t say the rest, because I know the rest; it all happened in his parent’s house while they were away all one summer, imagine the parents when then came home and saw where their balloon boy’s head was to think he could get away with all these propped up dead girls in the house when they got home?

Okay, okay. Now you say you don’t have the experiment. Then I’ll give you some shade, some eternal shade. I’ve had it with you. I will kill you now then.

Some door opened; Some switch was flipped; the wind and rain stopped; and the sunlight lit! And the sun sang out;  Non farmi aspettare, sang the sudden kindly round sunface peering in. It reached a hand into the tent, saying, Never mind all that now. Come on out, come on. Nobody’s going to kill anybody. Drug experiment 91 is over. You can sleep it off now. You might feel dead, but no way will you die. Plus, hey listen; thanks so much for participating in our experiment. You have a nice day now, hear? Here’s your twenty bucks. Bundle up, it’s cold out there. Even in the sun. Bye now, hear that sax fading? I am the sun. Fear me. Ra da da da da. Chanson d’amour.