Judith and the Crocodile, a short story by Niamh Byrne

Niamh is a writer from Dublin. She has published in three collections including an Easter 1916 commemorative edition of poetry. Niamh is a member of four writing groups and regularly chairs workshops at these and is currently finishing her first novel. Niamh teaches Creative Writing and has a MEd in Adult and Community education. She has performed her work at the Red Line Festival Civic Theatre Tallaght Dublin and in St John’s Theatre Listowel Co. Kerry. Most recently, two collections Niamh has published in were shortlisted for the CAP awards 2017 going on to win for Circle and Square first prize for best anthology. 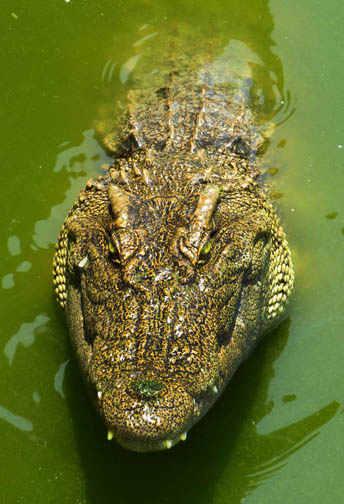 On the door was a drawing of a frog’s head its eyes large and wet looked out from the side of its wide beaked mouth. A slender silver crown banded its head. In the room lay a very long bed, Judith thought that’s an especially long bed.  It was low to the floor and had a tasselled blanket for covering. Stood against the partition wall a rocking chair with a high back and wide seat, opposite was a long freestanding mirror. The window was high and large there were two shelves and on one of them were rolled up papers. Judith took them down and saw they were drawings in chalk vivid in places of swamps, long grasses and rivers banks. The hairs on the back of Judith’s neck rose and as you sometimes do, she felt a presence and swung around. She thought she saw a crocodile standing in the long mirror but the room was empty.

‘How strange’ Judith said aloud. Before closing the door Judith ran her finger through the frogs face but it diminished it none.

I’ll have to paint that and get rid of the furniture; I don’t recall it when I viewed the house.’

On their first night in their new home, Judith lit the fire and spread a rug on the floor. Elijah, Alice and Judith sat on it and had a picnic dinner. The house was off a village in a line of eight and at the back low down ran a very fast flowing river. There were railings and willow trees at the bottom of the garden and one could look into its dark flowing water. After dinner Judith and the children went to peer over the railings as the evening light drew down. They threw sticks in and watched them rush away. Alice pointed

‘Look Mammy’ and across on the other sandy shore they saw a blanket of frogs hopping.

‘Yes darling lots and lots.’ Judith felt the tingle again and turned swiftly to catch the curtain fall in the high window.

Damn it Judith jumped. No now stop Judith’ she said to herself, Far far away, shake it off, it’s tiredness you always get jumpy when you’re tired, a few weeks of peace and quiet and all will be good.

Putting the children to bed, Alice gave mammy a book. ‘The wind in the willows’ Judith said ‘This is a new one Alice.’

‘I got it from the frogs room Mammy’ said Alice.

Tucking them into their floor beds Judith switched off the main light and switched on a lamp with Elijah and Alice’s little white faces looking up at her.

Yes, she had done the right thing taking this job away from everyone and everything a fresh start for the three of them.

‘Chapter One, The River Bank…’

Turning out the lamp the room was pitch dark Judith realised there were no streetlights shining in so she popped the lamp into the hall and left the children’s door open just a little. Tidying up the picnic dinner Judith sat and listened to the house.

‘The walls are that thick you’ll barely hear the neighbours its only when you open the windows the sound drifts in’ the auctioneer had said.

There was silence Judith put one more scoop of wood on the fire, she thought that she heard tapping, listening, the wood cracked, Judith’s relief was enormous.

Don’t get spooked she said to herself. Letting the fire die down Judith made a cup of hot milk, took her bag, and went to bed. Judith stood looking out her window for a while, it was quiet and dark, pools of light shone only a little from the houses.

Well at least people are still up I’ll go to sleep while they are awake. Taking from her bag a hammer and tucking it under her pillow Judith read her book and quickly nodded off to sleep.

Laying on his very long bed the crocodile waited, tapping his claws against the footrest. A line of light from the lamp in the hall cut across the blackness. Standing up the crocodile listened

‘Silence’ he said walking to the long mirror standing full length opened and closed his jaw, pushed out his little hands and twisted and licked the air with his tongue. He waited

Walking to the door, he thought he heard frogs chirping, listening,

He decided to wait and rocked gently back and forth in the long backed rocking chair. Opening and closing his jaw, licking and twisting the air with his tongue a long nail scratching his belly. Getting up after a spell the crocodile listened once more

Opening the door the crocodile came face to face with a frog wearing a crown. Crocodile snapped its jaw at the picture and the lidded eyes rolled over. The boards in the hallway creaked under crocodile’s weight and its shadow passed over the lamp. Crocodile stopped

‘Yes it is frogs, frogs chirping and croaking.’

Pushing Alice and Elijah’s door open the crocodile stood over them looking from one to another. He sat between them on the floor and ran their hair through his long nails. Crocodile lay down and reached his little clawed hands out but the chirping and croaking of frogs bubbled up into the room. Crocodile snapped his jaw as he got up. He closed the children’s door and stood on the lamp in the hall. Darkness engulfed the house. The crocodile stuck out his tongue twisting and licking the air its little hands reached out and turned the knob of Judith’s room.

On the opposite shore of the fast flowing river a blanket of frogs chirped and hopped gathering in the king’s name on the night of no moon. They made their way across the dark swift river and hopping through the railings and willows began to leap against the cat flap and land on the kitchen tiles croaking and chirping. Before long, the floor was a shimmering crowd of frogs. Judith woke dreaming of the frogs on the opposite shore only to realise she could hear them now. The room was dense with a foul odour her flesh wet and clammy. Judith sprang up, the floorboards moaned and creaked and coming behind her was the crocodile licking and twisting the air with its tongue. Judith screamed and pushed her hand under her pillow the crocodile opened its jaw and snapped it shut its little clawed hands reached out.

The house began to shudder and turn with the hopping, croaking and chirping of the frogs. Judith hit and screamed into the dark as a mound of wet hopping croaking frogs burst into the room. The frogs leaping landed upon the crocodile’s underbelly, on the crocodiles eyes, on his bumpy head and on his scaly back and more and more came. All hopped, croaked, chirped, and blinked their lidded eyes until their weight felled the crocodile to the floor at Judith’s feet. Frogs kept coming their weight and noise dumbing the crocodile down he trashed his tail and swung his head. Some were thrown to the walls, some hit the ceiling, and some flew at the window, still the frogs kept coming piles and piles of frogs. The crocodile’s tail slashed at her and the crocodiles jaw snapped at her. Up over the bed and back down onto the floor Judith made her way through the frogs and out of the room.

Judith went to her children she found them huddled together and crying. Judith locked their door behind her the stream of frogs still came up the stairs and filled her bedroom. The noise was dreadful streaks of growls and thrashings and furore of croaks and chirps filled Judith’s head until its sound was all her senses could carry. The trashing got less and overtime the fits and bursts were shorter. Grey streaks crossed the sky and Judith collapsed when she heard a loud croak the loudest croak of them all. All the croaking, chirping, hopping, and leaping stopped. There was no trashing; no fits of snapping the loudest croak of them all came again. Judith opened her eyes she came face to face with the frog in the pastel chalk drawing on the inside of the door. Croaking up into the air as its neck filled the slender crown catching the new light of dawn.

Mounds and mounds of frogs marched out of Judith’s bedroom and laid out on top was the crocodile. A procession of frogs made their way down the stairs while the King of the frogs chirped and croaked high up into the air. Judith followed and watched their slow march to the willows at the bottom of the garden. The king stood on the steps and watched over them. The frogs spun around and around, leaped and stood on top of one another but they could not throw the crocodile over the railings. The king looked to Judith with big wet eyes and croaked high up into the air. Judith went to the railings, pulled, and pulled the body lifting it to slump over the railings looking back at the house Judith gave one last heave and pushed crocodile into the dark fast flowing waters.

Walking back up the garden the dawn growing in the sky there was complete silence. Looking behind her to the opposite shore Judith found it empty. Going into the house Judith walked through the streaks of blood on the tiled floor and walked past the strips of blood on the wallpaper of the hall and stairs. Lifting the smashed lamp Judith went into the room with the pastel chalk drawing of the king of frogs on the inside of the door. Looking at the long narrow bed, about to sit in the high backed rocking chair, Judith caught a flash in the long mirror. It was a woman looking back at her. The woman was caked in blood and mud her hair ripped out and knotted her face moulted in brown and red, her hands shivering and her feet wet and muddy. Her nightdress torn to the waist, her chest exposed and scratched and a deep pocket of black around her eye and her neck red raw.

Judith edged slowly to the reflection touching every now and then the blood, the bruises, and the scratches. Looking into the woman’s eyes she pulled off the nightdress and as it slipped from her fingers she stood back from the mirror and lifted her head up to look. She saw the blood between her legs and the handprints on her waist and thighs, her hair ripped out, the red rings around her neck. Judith raised her arms into the air she made an arc. Holding her arms there widening her feet and raising her head she pushed all the air out of her belly, gathered it in her neck, and let out the loudest croak of them all. She filled her belly again and again and gathered it in her neck and croaked and croaked and croaked until it turned into a roar. Then reaching out her arms Judith drew the mirror to her and hugged herself until dawn burned in every corner of the room.