The Fat One, a short story by Kevin Doyle

Kevin Doyle has a first-class honours certificate in creative writing from Maynooth University. He has had four short story winning entries on Creative Writing Ink Journal. He has been published in The Cold Coffee Stand and in the Black Pear Press 2016 anthology. He lives in Ashbourne, Co. Meath with his wife Laura and daughter Rebecca. 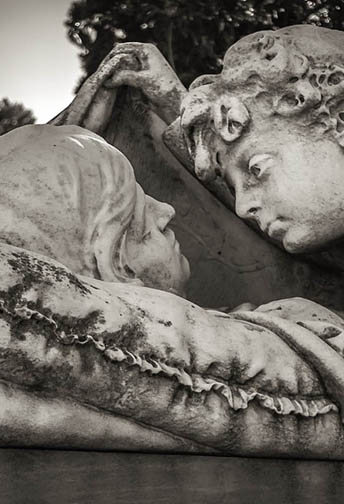 Mam’s buried six-feet underground in Glasnevin cemetery because of breast cancer. I wasn’t staring into space thinking of that version of her at the Saturday morning breakfast table.  The woman who loved a drink with her girls, cooking Sunday roasts and reading a bestselling thriller by the fireplace was instead at the forefront of my thoughts.

‘Fiona, enough bread. You’ll have a stitch at your match.’

Dad destroyed my memories of Mam with his sharp tongue. The curves at the end of his mouth twisted up like The Joker from Batman. His eyes not as sinister as the clown but there was an air of nastiness in his aura. Even more so than usual. He must’ve had another tiff with his precious girlfriend, Linda.

I shrugged back at him without eye contact. Linda, ‘the family friend’ who helped Dad through his ‘very tough time,’ remained silent. She knew not to say anything, or I’d tell her where to go.

Dad was just so dumb with his words. He always commented on my food intake like a normal person would pass an observation on the weather. I sprung out of my chair with my plate in tow. Dad didn’t notice my protest; he was too busy reading his phone.

Linda followed me. The oxygen in the tight kitchen became scarce. A cosy kitchen when Mam was alive. I was from planet earth; Linda was from a planet not yet discovered. She tried to talk to me about my upcoming match and her latest points in golf, but I was so drained of energy after what Dad said, I just nodded, pretended to listen, and looked at the picture of my real family that hung over the bin.

A few minutes later, I could hear a hair dryer upstairs. Dad was out in the garden admiring his plants that he treats better than me, his only child, his sixteen-year-old daughter. I had the needed space. I ran into the living room, and picked the sweet wrappers from last night’s secret that were stuffed deep behind the cushions.

My shame in my pocket so close to him

We arrived at the club house without saying a single word to each other.

I slammed his car door.

He rolled down the passenger window.

My rage from the comment he said at the breakfast table was wrapped up in the whoosh of that bang.

Faster, fat cow. That voice I tried to suppress was back for the first time today.

The laughter and giggles echoed behind the wooden door gave me the same shooting feeling in my stomach as the smell of chlorine from a swimming pool. I knew when I heard or smelled those things; my skin will be exposed to the world.

Opening the door, my usual hidden corner was occupied with teammates and bags. No room for me.

I was a substitute, again.

Facing towards the grey brick wall, I took off my jumper and t-shirt, praying the material didn’t get caught on my head like Mr Bean and that turkey. My jelly pear back visible to the dressing room. When I pulled off everything and flung my jersey on, the redness flushed out of my cheeks. Relief. Job done. My shorts and socks were already on, a trick I’d been doing for years.

A stocky but cute guy in a group of boys winked and smiled at me as him and his group of friends got told to leave the grounds for wolf whistling. I beamed back at him. My heart melted to caramel.

‘Fiona, warm up,’ my manager said, with five minutes left in the game. A game we were winning by ten points.

‘Get the ball first. Use your weight to bulldoze them out of the way. Score yourself or pass.’

I wobbled onto the pitch.

‘Stand in front of her, your ball all day long,’ the opposition manager coached to the girl marking me.

At the final whistle, euphoria broke out between the team. We were in the championship final. I didn’t get a pass of the ball during the game.

‘Vodka and 7up later in the old school pitch,’ Claire softly said into my ear.

I gave her some thumbs up as I took off my boots.

At home, I couldn’t stop thinking about that boy.

Later that evening, as it got dark outside, and the street lights turned on, I got ready for the night ahead. I squeezed myself into a pair of jeans that didn’t chafe my fat bits together, third time lucky on that front. I put in fake eye lashes and applied a medium amount of makeup. I loved winter so much; I was able to cover everything up by wearing a massive coat. I sprayed too much perfume on.

‘We’re heading the pub for a drink,’ Dad shouted up to me with the cold from outside whizzing into the house.

I yelled back thanks.

Drink sorted! Yous all owe me a tenner! And yes I’m taking commission for getting served!!

I put my reply amongst the rest. A happy emoji.

Reaching the field, I got a big hug off Lara. Which meant she was drunk already. Her breath smelled like a just opened tin of paint mixed with liquorice. I poured out a quarter of the 7up from a 500ml bottle, and filled it up to the brim with vodka.

I supped on it, the liquid contents burning my throat. A buzz flittered up to my head. There was about ten of us all together. As I pretended to listen to Claire and her boyfriend troubles, it dawned on me, I didn’t eat anything after my match.

How long are we here? No reply. Did I ask that question myself?

A reply, from afar, relax Fiona, what, you need to go back to your Daddy?

Don’t mention him. I screamed in my head.

Relax, Fiona. Jeez. It was a joke.

I said it out loud. Not in my head. Oops.

More vodka. It was going down like water now.

Boys all around me. Not one of them interested in me. But, that guy from earlier. The one who melted my heart, he was there.

He grunted back at me, and went straight over to Lara. She was fake laughing, touching them all on the shoulder. Teasing them.

Observing everybody, my guard was down. Each breath in and out, Mam in bed with her chemo bag, and Dad playing golf with Linda popped into my head. Another uncontrolled memory, the funeral. In the pub afterwards, Linda shaking everybody’s hand as they left, the last person to comfort my Dad was her. The way she trickled her index finger all the way from his wrist to his nails was uncomfortable to watch but the darkness clouded me so much I didn’t zone in on it on the worst day of my life.

You looked at your dad’s messages when you were twelve? Remember Fiona?

I can’t stop the thoughts.

Dad, do you love Linda? Think Fiona? You asked your Dad after pitch and putt on your tenth birthday on the way home.

Linda was in your dad’s phone as Work John. Recall? Come on now Fiona? You looked out late at night, the week before you started secondary school and you saw your Dad kissing Linda in her Mercedes.

Lara wasn’t there, everything was a blur. It was just all the boys.

Bursts of laughter rippled through the group.

I turned around, tears forced themselves, but they didn’t come out.

I smashed the boy who laughed the most with my fist and bottle. Blood burst from his mouth. Uproar and commotion spurted around me. Somebody tripped me to the ground. It was Lara.

‘Jesus Christ Fiona, go home,’ Lara shouted into my ear as I lay flat on the dewy grass, her pinning my arms to the ground. Her Dad was a self-defence coach.

‘Go home now!’ Lara stood over me, pointing towards the way out of the field.

I got up from the ground. The guy I hit was on his hunkers. He kept on dapping around his mouth, making sure he’d all his teeth.

I turned my back, walked at first. Then, I gradually ran. I eventually ended up at the front of my estate with my chest panting and finally, tears erupted.

I got a text message from Lara at my front door. Heard the full story, hope ur ok? x.   The censored porch light skipped my heart. I was sobering up a little bit.

Dad wasn’t home by the time I’d started on the mini muffins over the kitchen sink. Each one of them chewed and then washed down with coca cola. The miniature chocolate bars were my next victims; I kept eating them until I got sick in the toilet. I sat in the living room without the television on. I rested my head back. Closed my eyes.

The key sounded in the lock. Dad and Linda fell through the door laughing and shushing like people my age. I sat bolt upright. I must’ve fallen asleep. I started to think about what I’d done between the time I’d got home and now.

‘Desmond, the toilet,’ Linda said, in her over-dramatic voice that sunk into my insides.

‘Fiona Butler, explain yourself?’ Dad said, him drunker than anyone present.

Dad sat down beside me. His eyes swaying.

‘We need to change your therapist,’ he said, slurring most of the sentence.

‘I need to change my Dad,’ I replied, still staring at the blank television.

‘She’s not working for you.’

‘It was Mam’s birthday today and you didn’t even mention it.’

I thudded up the stairs, and slammed my bedroom door. Dad followed me, knocked on my locked door a few times. I said we’ll talk in the morning. Okay, okay, we’ve lots to discuss he said. Then, his footsteps down the stairs.

I picked up the picture of Mam on my study desk. The one with her smiling at her 50th birthday. She was gaunt then. The cancer had gone unrepairable. She put on some show that night. I’m an expert at putting on shows. I picked up the picture, and kissed my mother on her forehead. I kept looking at it.

I slipped into bed.

As I was about to turn off the lamp, that voice came back again. Saying I’d fail. That I’m fat. Insignificant. A nothing. A nobody. I turned off the light. The room in complete darkness. That voice. Silent. For now. I drifted off to sleep. Just thinking about. Mam.