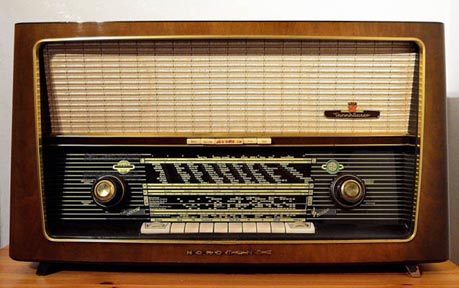 The old radio looked like a tiny church to me, the arched top and recessed front, the rich scratched wood veneer, like the pews and confessionals of our local chapel. For Cormac, who saw faces in everything, the knobs were eyes and the slot for the dial, a mouth on a mask.  While he untangled the cable and plugged it into the socket, I cleaned its surface with a damp cloth. The knob clicked like someone clucking their tongue and the steady buzzing of static was pushed out from its speaker.  Cormac slowly turned the other knob, pulling a white needle across the double row of numbers on the dial. We both flinched a little when it stopped on a new song his sister had been singing earlier; Cormac shook his head, disappointed. I think we had both expected to hear the past. His next attempt travelled an inch and only found the days weather, after that he turned the knob like he was trying to twist a pinch into a welt.

His sister complained when she saw it up on the kitchen table, she said it was probably full of spiders or mice, everything from that old shed was. Cormac didn’t answer, just turned his back towards her. She never spoke directly to me, she sometimes asked him questions about me, as if I wasn’t there. She stood watching while we continued to ignore her, her teacup held out like she were waiting for someone to refill it. As soon as she left the room Cormac turned off the sound, lifted the radio to his ear and shook it like a savings box. He nodded me closer, shook it again for me to listen, we looked at each other, there was a hard rattle from inside. I said it was a coin, Cormac suspected jewellery, when I suggested a key he nodded quickly to himself and then again at me. We had spoken before about his grandfather hiding money before he died. Cormac searched the kitchen drawers until he found an old screwdriver; we turned the radio upside down to find a way inside.

We had managed to loosen one of the screws when Cormac’s two older brothers came home. The eldest, Eddie, took the screwdriver from Cormac and patted the top of his head, hard, as if he were bouncing a ball off the floor. The other one shouldered me off the chair and pulled the radio away from Cormac. His name was David; we called him the fat sheep of the family behind his back. They smelled of beer and cigarettes. They were both blond and balding, wearing sharp collared shirts, bright as comics. Eddie said he remembered this old thing from his grandfather’s house. He plugged it back in and asked what the screwdriver was for. He tuned the radio to a classical station while Cormac answered, telling him we were trying to fix it. Eddie turned the volume up to its loudest, left it for a few seconds, turned it back down. It sounds fine to me, he said to Cormac. David formed two fingers and a thumb into a pistol, pointed them into my face and loudly farted. They stopped laughing long enough for Eddie to ask how my sister was before starting up again. I wondered for a moment if I should be annoyed, I decided no.

David was first to grow bored of us. He took cold turkey from the fridge, sat back down and cut small pieces with the edge of a spoon. He had a sweetly spiteful way of watching you, as if you were swallowing a drink he had secretly spit into. He told a joke I didn’t understand, I rolled my eyes, pretended I had heard it before. He whisked up one of his sour smiles, tapped the table with a single finger, then placed a coin on his palm for us to try and snatch. Cormac went first, three attempts, the last one knocked the coin into David’s lap. It stared out brightly from between his thighs, three inches below his crotch. He shifted towards me in his seat, arms outstretched and hands open, nodded down at the money. I stopped myself almost instantly, but they still laughed, I told you about him, Eddie said to Cormac. My fingers were trapped inside his fist on my first two tries, before the third he lobbed the coin into my chest, pulled another from his pocket and slid it across the table to Cormac. Their sister saw this as she came back into the kitchen. She asked did he have any more to spare. David told her they were looking for cashiers in the local supermarket, Eddie said her ear rings looked like price tags and she would fit right in. She opened her mouth and stuck out her tongue at them, as if proving she had swallowed a tablet, then slammed the door.

Eddie caught me looking at the thick scar that ran through his beard stubble; I could remember when it was new. Cormac had told me the hair would never grow over it again; he had shown me one on the side of his own head to prove his point. We hung around his house the day after it had happened; Cormac showed me bloody fingerprints on the frame of the hall door. It was over a girl, we overheard his mother telling one of the neighbours. The wound was covered by a soft white patch, the edges stained orange, from iodine I knew. I wanted to see the stitches; I imagined them thick and black, like spiders legs sticking out of his skin. We watched him watching television, trying to smoke through the other side of his mouth, until he got angry and hissed at us to leave him alone. This time he just stared at me for a moment, whistling through his teeth, lip curled into a lazy snarl. He pushed the radio away from him then, like a meal he couldn’t finish, Cormac managed to unplug it and wrap up the cable without either of them taking any notice. He looked at me and nodded towards the back door, radio held under his arm.

Eddie was saying goodbye, warning us to stay away from cider and loose women, when we heard voices from the hall. It was their parents, home early, their father first through the kitchen door. Ah ha, the two desperadoes, he said when he saw them sitting there, then asked were they coming in or going out. Eddie told him were they had been, then slid his chair away from the table with a push of his legs. They were older than my parents. He was bald and weather-beaten, with a scar on the peak of his cheekbone, shaped like the letter o with the top left open. He picked an apple from the fruit bowl and held it in his mouth while he took off his coat, it made me want to laugh, the stretched roast pig face and him grunting. She was thin, almost as tall as he was, with a mop of dark hair split in a parting of sly grey roots. She never stood easy, even now she grabbed a broom and swept the floor, stabbing the corners like she were trying to blind someone. I had never heard their father talk so much, he usually sat here quietly, plodding through his meals, while the clock counted one, one, one. He even said hello to me, who usually got a short nod or grunt. Eddie stared into space while he listened, fingers burrowing under his collar. Their father broke off suddenly and pointed a wagging index finger at the radio under Cormac’s arm. He took it with both hands and placed it on the kitchen table, he asked Cormac where he had found it, he didn’t wait for an answer but told us how it had been the centre of the house before television. He called their mother to have a look, she touched one of the dials lightly, as if she were testing a blade, then took a tiny step away from him. He rubbed his hands together roughly, like he were warming them up for some tricky task, plugged the radio back in and clicked the power on.

He was tuning it and telling how they used it to listen to football matches, when Eddie stood and punched him into the side of the face. He dropped to one knee and held the edge of the counter, like a boxer I had seen once on TV, holding the top rope. Eddie stepped back, fist raised, breathing through clenched teeth. David stayed in his chair. Their mother stood still, hand to her cheek as if it had been her who was struck. David rose and stamped down between his shoulder blades with the sole of his boot. They put an arm on each other then, half leaning half pushing, as they kicked the body of their father. The only violence I had ever seen in this house was Cormac’s sister thumping his back as he sat at the kitchen table, eating a cake she had left in the fridge for herself. I had laughed as he continued to stuff it into his mouth. She hit her brothers in the same way now, pounding their shoulders and heads with the undersides of her fists. She screamed at her mother, asking why she had not stopped this. She screamed at her brothers, asking why they had not done it years ago. She ignored Cormac who had quietly watched the whole thing happening, then shouted at me to get out.

The two brothers left through the front door. Their sister helped their father to stand up; he was bleeding from the mouth and a cut in his eyebrow. She sat him at the head of the table, held a tea towel onto his face. The blood stopped for a second when she took it away, then seeped through again, avoiding his eye as it made its way down onto his neck. I would have liked to stay and see what happened next, but Cormac grabbed the radio and waved me to follow him out the back door.

We went back to the shed where we had found the radio, over two streets, down the side of his grandfather’s house, through the half fallen door leaning against its own jamb. Cormac set the radio down on an old work bench, rummaged through the tools for something to open it. I watched while he worked, remembered a time his father had casually pushed his mother out of his way, like he were opening a door. Cormac unscrewed the base of the radio, lifted it like a lid. I loved Cormac’s smile, I hated when it hardened. He reached inside and picked out a small black stone. We looked at it for a moment, I took it and threw it hard at the filthy glass of the only window, it bounced off. Next I took the screwdriver he had used and flung it like a knife; it hit the glass and fell onto the floor. Cormac’s smile was returning. I grabbed the radio and rammed it through the window, the plug caught like an anchor on a shard of glass. Cormac was laughing, pointing out other things for me to break, a vase and picture, a box of fruit jars that cut my finger, and he counted as they smashed against the wall.