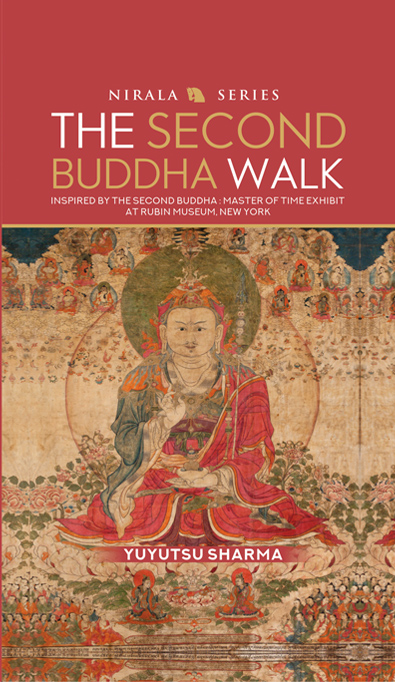 “New York triggers action,” writes Yuyutsu Sharma in The Second Buddha Walk’s introduction. As a New York City transplant, I agree, and dive into reading with gusto. I’ve always read poetry collections out of order, each snippet savored as a tourist would a museum. I read it now as a resident that has time to examine each piece in each gallery in order, time and again.

“What feeds the furnace?” catches my eye for the sounds of the city and the emotions it elicits: “driving the demons on a damp day away, / a conical kettle bubbling on an ancient stove.” These lines bring me to an apartment in the Bronx, where my landlord’s workmen had to chisel the stove out of the counter after I threatened to call ConEdison about the smell of gas. Later the speaker mentions a siren “cracking the silence of a million eons.” I think of the sirens that screamed incessantly near a friend’s apartment in Queens during the early days of the COVID-19 Pandemic.

“Beef” hits my thoughts on faith, as the speaker accidentally eats forbidden meat prepared by a Brooklyn host. He wonders if he can forget this information, because, after all, “Do our Gods hold any sway here?” The speaker’s goddess visits him the next day with a rash, as she had once during childhood, and so he remembers his mother telling him “she will pass through your body / like an angry wind or a wave of a troubled ocean / and perhaps never return.” I consider my faith, and how it has evolved since I first moved to my true home; how this city is one that will teach you, if you listen, that all gods—or no gods—have sway.

Recipient of fellowships and grants from The Rockefeller Foundation, Ireland Literature Exchange, Trubar Foundation, Slovenia, The Institute for the Translation of Hebrew Literature and The Foundation for the Production and Translation of Dutch Literature, Yuyutsu Sharma is a world renowned Himalayan poet and translator. He has published ten poetry collections including, The Second Buddha Walk, A Blizzard in my Bones: New York Poems, Quaking Cantos: Nepal Earthquake Poems, Nepal Trilogy, Space Cake, Amsterdam and Annapurna Poems. Three books of his poetry, Poemes de l’ Himalayas, Poemas de Los Himalayas and Jezero Fewa & Konj  have appeared in French,  Spanish and Slovenian respectively. Half the year, he travels and reads all over the world and conducts Creative Writing workshops at various universities in North America and Europe but goes trekking in the Himalayas when back home. Currently, Yuyutsu Sharma is a visiting poet at Columbia University and edits, Pratik: A Quarterly Magazine of Contemporary Writing. https://niralapublications.com/nirala-authors/yuyutsu-rd-sharma/

Jessica Penner’s first novel, Shaken in the Water, was named an Editors’ Choice by the Historical Novel Society. Other work appears in Wordgathering, Bellevue Literary Review, Luna Luna, Necessary Fiction, The Fiddleback, Journal of Mennonite Writing, Rhubarb, Journal of Mennonite Studies, and the anthologies Tongue Screws and Testimonies and Gush. She teaches composition at New York City College of Technology. Links to some of her work can be found at jessicadawnpenner.com. She lives in New York City—Crown Heights, Brooklyn—to be exact.