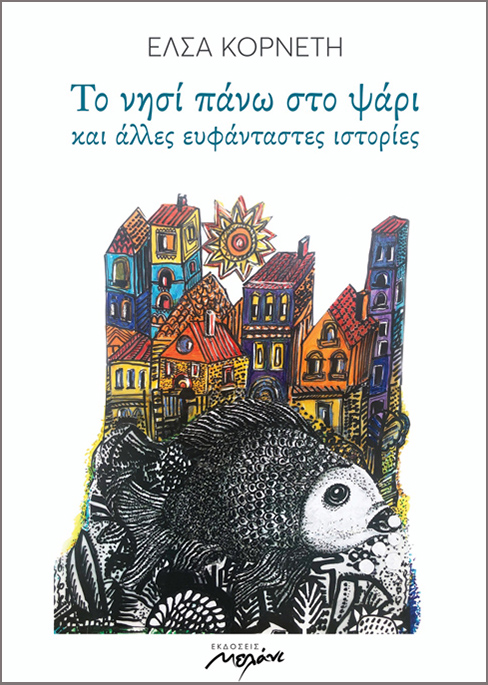 Strange cities and stranger people, contemporary fairy tales, an osmosis between the reality and the fantasy, but mostly the battle between the good and evil: these are few of the main characteristics of the short stories, which compose the new book written by Elsa Korneti, has been published in Greece by Melani publications (2020), and entitled The fish on the island and other imaginative stories. We could argue that nowadays the literary genre of fairy tale is quite advanced, namely not only the classical writers such as Bothers Grimm and Hans Christian Andersen but also writers such as Edgar Alan Poe tried to approach and explain the reality using literary patterns of the fairy tales or more often of the Magic Realism. And Korneti tries and manages exactly that: deals with the contemporary issues, problems and scourges of today sometimes not only under the perspective of the Magic Realism but also borrowed metaphors and archetypes from the fairy tales·  And all the aforementioned in a very effective literary way. Let myself explain and start at the very beginning.

Each one of the “fairy tales” of the book follows the structure of the short stories: a simple structure with few protagonists ― sometimes nameless ― a narrative without description of the time and space, quite often with no description of the action, a plot composed of escalation, crisis, a turning point and a sharp and open end but always with a precept. All the stories set questions to the readers based on the dilemmas of their protagonists, heroes and anti-heroes, and each one of the stories focuses on a very specific theme. There is a balance between the external and internal action of the protagonists, the narration is flowing based on an almost music, quite poetic language and the omniscient narrator, knows everything, is omnipresent, sometimes leaves us at the end of the story a bitter taste, other times is smiling to us in a sardonic way, with a mixture of irony and melancholy.

At this point could someone ask why these “fairy tales”, these imaginative short stories concern us. Why we have to read them and which the benefit is for the contemporary readers. The answer to the aforementioned questions can be found on the themes of stories. The theme centered reading is the key which can unlock the mystery box of the reading as a social and personal act of this specific book. If we were trying to condense into a phrase the perspective of this stories collection we could assert that the whole book is an ironic comment to the contemporary civilization. We could argue that the book itself is a metonymy regarding evil’s banality, a synecdoche of world’s rapid metamorphosis through the violent technological effects.

The reading process sets fire a series of questions which based on the following opposite pairs: nature versus technological progress, real simple life versus fake blissful life, the misery of poverty versus illusive happiness of wealth, art versus machine, faith versus betrayal, truth versus lie, mercy versus cruelty, life versus death.  Let me be more analytical. The stories can be grouped in four major categories: a) those which deal with the curse of the rampant technology’s evolution. Into this group we might integrate for instance short stories such as: “The prince of algorithm”, “The flower of video game” and “A sort of love”. b) Those stories which reflect the revenge of the nature, stories like “The fish on the island”, “The saturated”, and “Sea minefield”. c) The third group consists of stories which narrate the unmerciful human’s nature and its punishment. We can say that into this group belong stories such as “Greetings” and “The sequence of Hyper sounds. d) Last but not least we read stories about the human feelings such stories which talk about the loss of love, the loss of faith, the loss of fatherland, the loss of life. We could integrate into this group stories such as “The silence of the Lighthouse”, “The feather collector” and, “Bitter ink”.

There is no doubt that always and throughout the centuries truth is hidden inside the fairy tales. But what sort of truth? Is just the final moral precept of the stories enough for the contemporary readers? The question is of course rhetorical and depends on the reception of each reading and on the demands of each reader. But what makes finally the stories of Korneti pretty special is that the hidden meaning, the precept is focused on the future. The futuristic prospect of the book enriches not only the meaning of the “fairy tales” but also the purpose of the act of reading.

Active in organizing readings and events with other poets, Elsa Korneti was born in Munich, Germany, but grew up in Thessaloniki, Greece and still lives there. Her career has been similarly diverse: studies in finance were followed by work as a journalist; she has published essays, book reviews, translations, short stories, and eight books of poetry. Part of her work has been translated and published in foreign anthologies and literary magazines in ten languages. She has been twice nominated for the Greek National Poetry Award. https://www.facebook.com/elsa.korneti.7

Dr. Sotiria Kalasaridou was born in Thessaloniki, Greece. She has studied Philosophy at the Aristotle University of Thessaloniki and her Master Degree is related to the Pedagogy and Education. She has a Ph.D in Literary Education and essays and articles of her have been published in many academic journals and conference proceedings in Greece and internationally. Her first book (Shekspearicon, 2017) has the title Literature on the Internet. Mapping and Utilisation in Teaching. Her academic interests are regarding of Research and Literature Education, Reading Socialisation, Verbal Interaction in the literature classroom, Literary Criticism, Creative Writing, New Technologies (ICT) and teaching Utilisation, Designing Principles of Educational Scenarios, Teaching Holocaust and metaphors understanding. Since 2013 has published a number of literary reviews in many literary journals. She was a scientific associate at the Center for Greek Language and she has taught as visiting lecturer at various university departments. In 2016 she received Post-doctoral Research fellowship of excellence from A.U.TH. Research Committee and thesis entitled Literature on the Internet. Mapping and Utilisation in Teaching. From April 2017 till April 2019 she was post-doctoral research fellow of the State Scholarships Foundation (I.K.Y).  Since 10/ 2019 she is a Postdoctoral Research Associate, Faculty of Philosophy – Aristotle University of Thessaloniki, Greece.