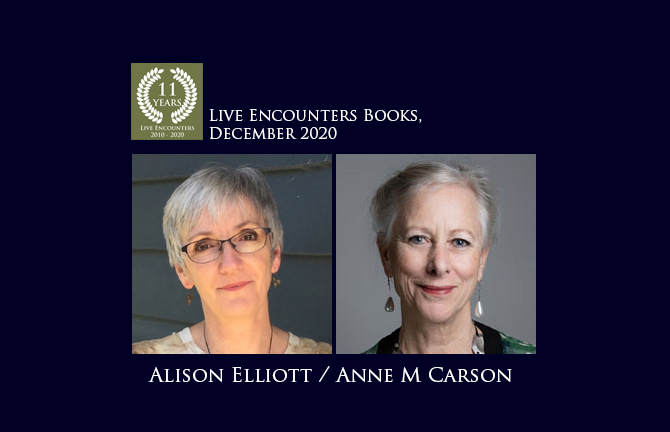 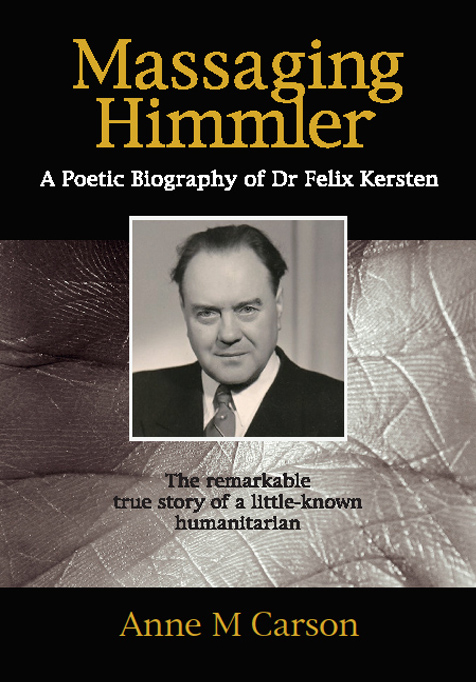 Though we didn’t know each other as teenagers, Carson and I shared an intense desire to understand and witness the holocaust. Carson nurtured that enquiry to fruition in Massaging Himmler: A Poetic Biography of Dr Felix Kersten, a poetic page-turner, a story of intensity; the reading experience as visceral as the massage at its core.

I came to this story partly as a colleague and friend of Carson, and partly as a body work practitioner – this gives me particular receptivity to the way massage was enacted and manipulated in this story. Using juxtaposition, metaphor, shape and space, Carson has recorded the journey of discipline as Kersten learns to perform his physio-neuro massage. To push forward into tissue, to pause, to breathe, to allow direction to emerge, intensity, timing – to allow release.

Kersten’s negotiations with Himmler mirror this massage process; push forward, pause, breathe, balancing direction, intensity and timing, eventually to create the circumstances for the release of thousands of prisoners.

I watched Carson develop her own discipline with the material in the book. One doesn’t simply walk into the voice of evil. In order to capture this, one must process its existence; push into it, pause, breathe and allow direction to emerge. This is a visceral read; the embodied self of the reader comes to know the trajectory of evil, the contradictions of humanity and what it takes to find agency and restore balance, through their embodiment on the page, in the poems.

“…..how wearing
to live under that regime until away, you find your

Shoulders drop down and your breath deepen.
How the body holds tension…..”
[1]

Kersten questions his own integrity in the face of Himmler’s evil, taken into his hands as his body decides his moral position. Can he adhere to his moral code as a healer, balance his own desires for action and allow a “whole new symphony”[2] to transpire? In the end his hands choose to inflict pain on Himmler, the better to secure releases.

To really understand the knife’s edge and precarious balance of Kersten’s achievement, one must understand the context of the time. Carson’s use of form is a masterstroke. This story unfolds on the page within the margins of history through the use of marginalia – ‘tracks’ which tightly contain Kersten’s story, just as the Nazi train rolls across Europe, seemingly unstoppable.

“A great deal of talking yet to slow the great heavy
wheels of war, now they turn with such momentum.”[3]

This is a story of the past and a story for our times; a study of the courage and the discipline it takes to create a better future.

“If our prayers/ were winged, the sky would throng with thank-birds.”[4]

Anne M Carson’s poetry has been published internationally, and widely in Australia. Recent publications include Massaging Himmler: A Poetic Biography of Dr Felix Kersten (Hybrid, 2019), and Two Green Parrots (Ginnindera Press, 2019). She has initiated a number of poetry-led social justice projects. She is currently a PhD candidate at RMIT where her project includes poetic biographies of two creative women – Anna Magdalena Bach, a ‘flawless’ soprano (according to her husband, Johann Sebastian Bach) and George Sand, prolific French novelist.

As a Taurean, Alison Elliott has always had a love of the physical world. As a physio student she learnt of nerve stimulation, proprioception, muscle trigger points and the value of deep massage therapy. As a Feldenkrais practitioner she learnt about the embodiment of our being, our psyche and how the simple act of movement can reveal us to ourselves. Posture at first appearing as a static state resulting from our anatomy, is rather seen as an active and continual expression of self; and in its active state, amenable to change and learning. Later, learning Bodytalk, a form of kinesiology, she further refined her sensitivities, exploring the subtler energy fields of the world. All of this study was imbued with a moral and spiritual enquiry. What was justice ? How should one live to create a just world? How do our socio-political structures live within us and express themselves in our societies? For much of her career she has worked in the public health sector. She is currently a General Manager at a Community Health Service in Victoria.