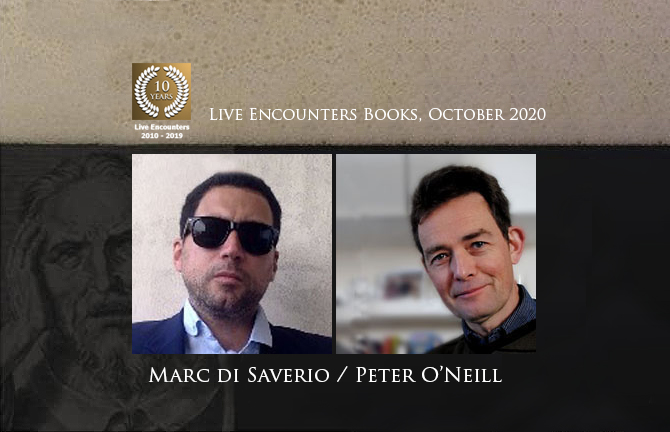 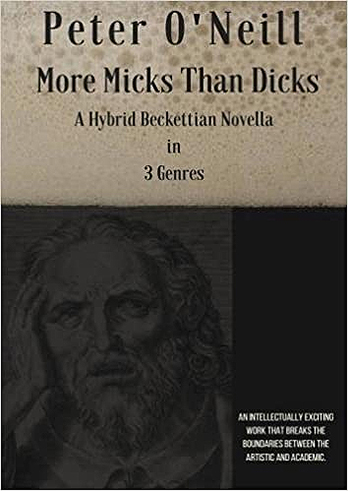 More Micks than Dicks (2017), written by the criminally neglected Irish poet Peter O’Neill, is an epic hybrid novella told in 3 genres – is an astonishingly expansive, shamelessly daring, and compulsively inventive work of veritable art divided into four parts: More Micks Than Dicks; the Trees of Ephesus; Sweeney Amok; and Orpheus. O’Neill’s epic begins in the genre of prose, at a Dublin pub:

“White was sitting behind the circular wrought iron cafe table, with the three crisp beer mats acting like Pythagorean points of reference, awaiting his stout. It was just after eleven, according to the old wooden clock hanging up on the wall beside the portrait of Samuel Beckett. Not an excellent physical likeness by any means, he thought, but that was not the point. It exuberated a flinty resonance in the light of the back room which received its luminance through the now curious architectural motif of the vaulted roof, rather akin to the stack one finds in a distillery, and it was this exact flintiness of light which corresponded so wonderfully with the tête mort of Beckett.”

Between this exquisite opening and the following end — the end being in transversional verse as opposed to prose –, it is as though O’Neill has created an ultimate zibaldone, a work that is so mercurial, dynamic, and volatile in both subject matter and form, that the book almost feels uncontainable, even though it absolutely is — the book feels like a biological specimen, always in flux, always amid innovative metamorphosis:

II. The Albatross
After Baudelaire

Often, to amuse themselves, ship crews
Brought aboard Albatrosses, those great birds of the sea,
And who often were their indolent companions,
As their ships glided upon the bitter waves.

And, almost as soon as they let them out on deck,
How these great sky kings suddenly then appeared ungainly and awkward,
Trailing piteously their great white wings
Like proud useless oars behind them.

These winged voyagers, how they appeared so out of place.
Once the superb plungers, now they looked only comical and stupid.
One shakes her beak about in frustration;
Another mimes, as she clumsily walks, the infirm who fly.

The Poet is rather like these Princes of the Clouds,
Those who would fly above the eye of the storm, smiling
As they look down. Yet, exiled upon the earth, in the market place,
Their great wings impeding even the most local movements.

In 2017, More Micks Than Dicks sold 1,000 copies, and was reprinted 3 times that year; however, due to poor investments, O’Neill’s publisher went bankrupt, meaning More Micks Than Dicks is out of print, and without a house to publish the fourth edition. This book should unquestionably be reprinted, and fully celebrated as a masterpiece of English Language Literature. I feel O’Neill’s underatedness is a result of his choosing NOT to write in the same 50 year old box in which most poets choose to write, thus ensuring they are accepted by the Establishment, rather than everyone, with whom every poet should be striving to reach, delight, and enlighten, since we are living in an Emergency Present, and though poetry must remain an art that is perfected by the poet, the poet, now, to me, should be trying to perfect society, and in so doing, must reach all people, not just the Establishment. There was a time when poets could, like rippleless ponds reflecting clear skies, reflect humanity back to itself, but, now, the poets must not only reflect, but also boldly direct, humankind. The Literary Establishment is the thief of the reader’s own transformation, if they do not have access to this book. More Micks Than Dicks is a clarion call that must be heard by Generation Z, and forthcoming generations, since, O’Neill’s opus is one that was written outside of the electrical cages of political correctness in which other poets write, and, having escaped that electrical cage, O’Neill is writing in boiling blood, rather than in tepid water, which other poets write, leaving no impression. I highly recommend More Micks Than Dicks to anyone with eyes to see and ears to hear, since it is verily a great work.

Peter O’Neill is the author of several books but among them are his first selected works The Elm Tree published in 2014 by Lapwing in Belfast which contains extracts from The Dark Pool eventually published the following year and Dublin Gothic and The Enemy – Transversions from Baudelaire, also published by Lapwing. These three collections form his first great trilogy which is a homage to Baudelaire.

Marc di Saverio hails from Hamilton, Canada. His poems and translations have appeared internationally. In Issue 92 of Canadian Notes and Queries Magazine, di Saverio’s Sanatorium Songs (2013) was hailed as “the greatest poetry debut from the past 25 years.” In 2016 he received the City of Hamilton Arts Award for Best Emerging Writer. In 2017, his work was broadcasted on BBC Radio 3, his debut became a best seller in both Canada and the United States, and he published his first book of translations: Ship of Gold: The Essential Poems of Emile Nelligan (Vehicule Press). Forthcoming is his epic poem, Crito Di Volta. He is currently writing his first novel, The Daymaker.’ Di Saverio studied English and History at McMaster University, but never took a degree, due to illness. He is the son of Carlo Di Saverio, the scholar and teacher who studied Linguistics and Languages at University of Toronto (M.A.,1981). Di Saverio’s poem, “Weekend Pass”, was adapted into the movie, CANDY — directed by Cassandra Cronenberg, and starring the author himself — which went to the Toronto International Film Festival in 2013.