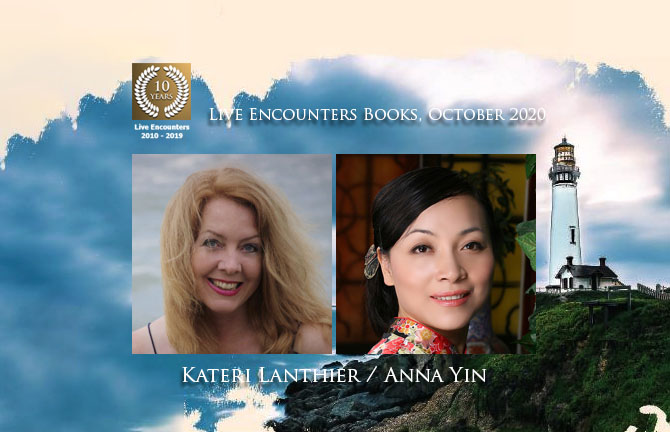 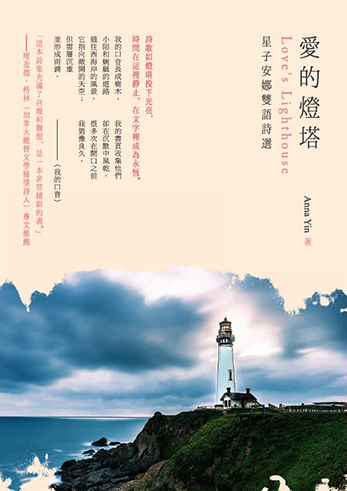 The poems in Anna Yin’s Love’s Lighthouse travel variously. Some ripple out delicately and diminish gently, while others swell to surprising heights, gaining force and moving far. Yin presents her poems in Chinese, each followed by her own English translation. This makes for a rich, authoritative collection that many readers will find fascinating for its linguistic juxtapositions. The poems “breathe in two languages.”

Vivid images of snow, apples, pears, onions, trees, the moon, and shadows unite the work, recurring across Yin’s free verse and haiku, as well as an insistent move towards mythology. Dream-like states and mild Surrealism characterize her poems, suggesting the influence of both Imagism and the long-standing Chinese lyrical tradition. Dreams evaporate on the brink of a realization or reckoning. Love, to Yin, seems subject to loss and deflation, or to a flaring re-emergence, like the beam of a lighthouse through storm clouds. Poems addressed to a defiant, commanding father figure (“My Father’s Temple”) reveal a powerful grasp of narrative.

Some of the strongest poems display sharp humour, as in “I Often Dream of Fish”: “Wake up surprised / By my nudity. // Fish is a symbol for sex / a specialist explains; / she offers a miserable look.” Contemporary details ground “WeChat”: “Angels are from heaven, not random results from Google, / too many and all kinds of: / Angelfish, Angels trumpet, Angel Eyes, / Computer Virus Angels and Fallen Angels…” While she evokes Western cultural figures (Van Gogh, Yeats, Robert Frost), Yin also dedicates a poem to Song dynasty poet Li Qing Zhao and to the memory of Cecilia Zhang, a child from Mississauga, Ontario whose abduction and murder shocked the community. She also references Canadian poets Gwendolyn MacEwan, Leonard Cohen, and Irving Layton. The latter receives an effective rebuke for his declaration that “poetry merely exists for showing the dark of our soul.” Yin responds: “I long to show you the opposite: / Before poetry found me, / I was nearly drowned in dark.” Love’s Lighthouse reveals that the beacon is “not in the distance, but in your heart.”

Kateri Lanthier is a poet, essayist, and reviewer. Her poems have been published in many journals, including The Fiddlehead, Event, Hazlitt, Green Mountains Review, Arc, Grain, Great Lakes Review, Best Canadian Poetry 2014, Halibut Haiku, and the Literary Review of Canada. She won the 2013 Walrus Poetry Prize and third prize in the London-based Troubadour International Poetry Prize. She is a Mentor in the MA in English in the Field of Creative Writing, University of Toronto. She delivered a TEDx talk on poetry at TEDx Ashbury College, Ottawa. Her essay “Lifelines: Of Heart, Lungs, Blood, and Ghazals” was included in the anthology Against Death: 35 Essays on Living (ed. Elee Kraljii Gardiner, Anvil Press, 2019; Montaigne Medal finalist). Her books are Reporting from Night (Iguana, 2011) and Siren (Signal Editions, Véhicule Press, 2017), longlisted for the 2018 Pat Lowther Memorial Award. Poems from Siren have been included in four anthologies.