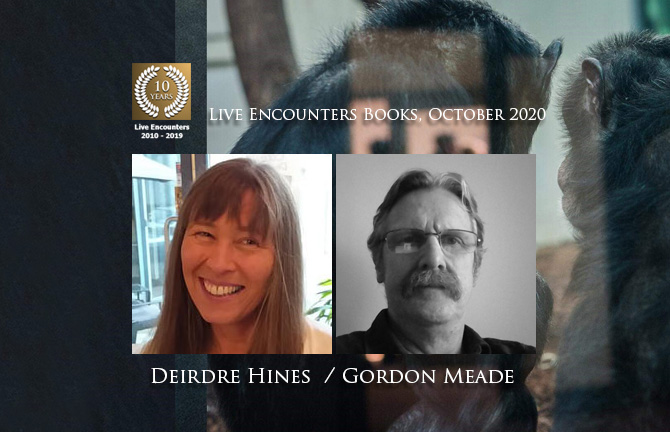 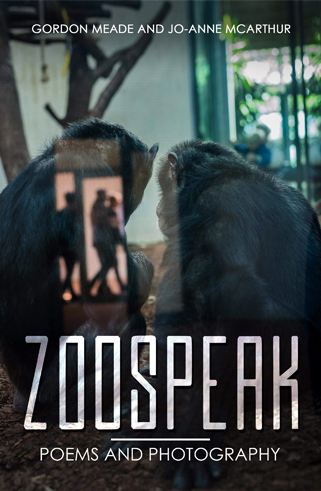 The Faces of Others

Our first zoos began in the late 1700s, when animals were moved from the Versailles menagerie to a zoo in the Jardin des Plantes for academic study. Zoos have always purported to entertain and educate the public, although in modern times, their emphasis lies with species conservation and cutting edge methods of scientific research. One could be forgiven, therefore, in assuming that today’s zoos would reflect every advance made in man’s understanding of an animal’s basic needs. Gordon Meade’s tenth book of poetry, Zoospeak, shows and tells the inhuman and appalling conditions the forty eight living zoo animals between its covers are living in. All fifty poems in this collection are the poet’s repsonse to photos taken by animal rights activist Jo-Anne Mc Arthur of animals in various zoos around the world over a fifteen year time span, published in her book ‘Captive’. It appears that the zoos in which these animals are housed are guilty of gross neglect at the very least, and bland indifference in the main.
Each of the images Meade has selected from Mc Arthur’s book have an accompanying poem, and all of these images are in black and white. By choosing to photograph these animals in black and white we the viewers have no recourse to colour to soften their impressions. The poems that accompany each image are in the parlance of poetry speak ekphrastic, but there is something else at play here, which a persistent reader is rewarded with, and it is this; by bookending this collection with two poems that respond to dead animals (a deer’s head and a calf), the poet seems to be saying that the other forty eight animals are experiencing a living death. Twelve animals comprise each section, ordered into the years Mc Arthur photographed them. All of the poems are written in the present tense, and use the first person pronoun, emphasising over and over again the individuality of each imprisoned creature. Chronic captivity stress in wild animals is highly species specific. Zoochosis is a word used to explain the stereotypical behaviour of captive animals. The problem has been found to be most acute in polar bears, which have proved especially difficult to keep sane.They often show disturbed behaviours such as swimming for hours in small circles or as in Meade’s poem ‘ Polar Bear, Canada 2008 ‘ ;

It is hard for you to tell
whether or not I am praying
for snow or just staring
at an electric fence;
and it is hard for me too,
as there is no snow……..”


To read at the end of this section about the minnow that has been motionless for two years, reminds us that a poet’s eye does not exclude anything, no matter how small.

I particularly like the way Meade understands that animals should be given the means and motivation to practice a full range of behaviours, such as exercise opportunities-

Cage size and density has long been understood to prevent the physiological changes that take place if there is no scope to move freely, and yet we have a silver fox, photographed in Sweden in 2010, that adopts the tone of a satirist in the following lines-

…..” I think you have, as far
as is possible, given the present
circumstances, definitely succeeded
in capturing my best side…”

As the collection progresses, the poems begin to comment on us, the human race. I particularly loved the voice of ‘ Brown Bear, Croatia, 2016 ‘-

Lighting conditions are very important for visual species, and a child would know that the American White Pelican’s natural environment would include the shifting seas reflecting blue skies has instead ‘ a sealed off light switch/ and an unpainted rectangle/ on one of the walls/ where a radiator had been./ There is a bale of straw,/ but no sign of fish at all.

The pathos gathers momentum as each poem accrues a deliberate consistency of repetition that forces the reader to transition their knowledge of zoochosis from our conscious mind to our sub-conscious. Each poem has seven verses in all, that have three, then four, then five, then six, then seven, then eight, then nine lines with each of these verse repeating the lines of the previous verse and adding one more. I found such a technique helpful in my imaginative realisation of captivity, and I think this is deliberate on the part of the poet. Using form like this brings home to the reader the confines of a cage, and the stanza has always been the perfect little room, though in this case, after reading this collection, I will no longer be an advocate of zoos. There are many reasons for writing poetry, not least of which, is poetry of witness, Meade exceeds at writing about the natural world, but in this collection, he has taken up the cry of the most invisible of the oppressed, and written a collection which champions the cause of freedom in clear and accessible language, that lays bare our inhumanity toward our fellow creatures. In these Covid times, there may be a certain correlation between lockdowns that could soften the hardest heart. Thank You Gordon Meade and Jo-Anne Mc Arthur for taking the time to notice and to show us that in the faces of others we see our own faces reflected there. I loved it. A must have on your bookshelf.

Deirdre Hines is an award winning poet and playwright. Her first book of poems ‘ The Language of Coats’ includes the poems, which won The Listowel Poetry Collection Prize 2011. It was published by New Island Books in 2012. New poems have appeared in Poetry Ireland Review, Abridged, Crannóg, Boyne Berries, The Honest Ulsterman, The Bombay Review, The Lake & Elsewhere (U.S.A.) to name a few. Her poetry reviews have appeared in Riggwelter, Sabotage, PN Review and Rochford Street Review. She sits on the organisational committee of North West Words. She can be contacted for workshops and readings at deirdrehines@hotmail.com