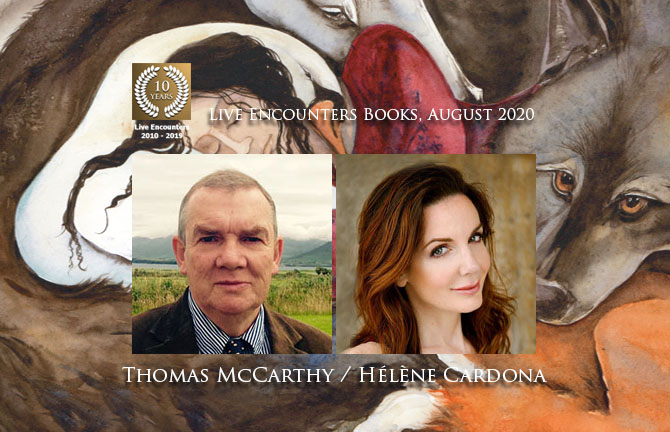 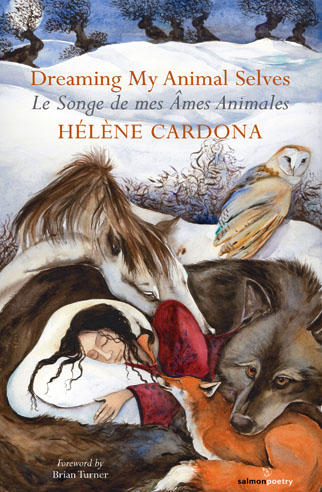 In Dreaming My Animal Selves the poet Hélène Cardona has become a dreamer upon two pillows of language. Taking her queue from Rilke, she has captured dreams in a diglottism of the soul, a literary isthmus of heliotrope and honeysuckle, where her singular voice endures as ‘a thistle, resilient/ rooted in Mediterranean Celtic fringe.’ Through poetry she reaches that gateway between the past and the way ahead. It was Gaston Bachelard who wrote that the roots of the grandeur of the world plunge back into a childhood and here, in her reflecting moments, Cardona reaches back to the amethyst eyes of a Francophone motherhood. Here is a poetry of exotic retreat, from the translucent face of Tibet to the Cyprus pomegranate of Athena’s altar; and here, too, Aphrodite guides her to a place where she is compelled to pay for her mother’s death with a literary price extracted from dreams. It is always a risky business for a poet to self-translate: it may seem like wanting both the work of art and the readers’ response – but Hélène Cardona gracefully travels across languages, in the manner of our own Michael Hartnett, Paddy Bushe, or, more lately, Fred Johnson, to arrive at a point of insight where we are all enriched.

Dreaming My Animal Selves is a graceful skate across a liquid language, a voyage across subliminal waves; a poetry where, as she writes in ‘Parallel Keys’ she reveals herself by ‘fixing the omen.’

Thomas McCarthy was born at Cappoquin, Co. Waterford and educated at University College Cork. He was an Honorary Fellow of the International Writing programme, University of Iowa. His work includes The First Convention (1978), The Lost Province (1996), Merchant Prince (2005), The Last Geraldine Officer (2009), two novels and a memoir. He has won the Patrick Kavanagh Award, the Alice Hunt Bartlett Prize and the O’Shaughnessy Prize for Poetry as well as the Ireland Funds Annual Literary Award. He worked for many years at Cork City Libraries. He was Humphrey Professor of English at Macalester College, Minnesota, and is former Editor of Poetry Ireland Review and The Cork Review. He has conducted poetry workshops at Listowel Writers’ Week, Molly Keane House, Arvon Foundation and Portlaoise Prison. He is a member of Aosdana. His collection Pandemonium was published by Carcanet (2016). His new work, Prophecy, was published by Carcanet in 2019.

Hélène Cardona’s books include Life in Suspension, Dreaming My Animal Selves (Salmon Poetry) and the translations Birnam Wood (José Manuel Cardona, Salmon Poetry), Beyond Elsewhere (Gabriel Arnou-Laujeac, White Pine Press), Ce que nous portons (Dorianne Laux, Éditions du Cygne), and Walt Whitman’s Civil War Writings for WhitmanWeb. She is translated into 16 languages. The recipient of over 20 honors & awards, including the Independent Press and International Book Awards, Naji Naaman Prize, and Hemingway Grant, she holds an MA in American Literature from the Sorbonne, worked as a translator for the Canadian Embassy, and taught at Hamilton College and LMU.