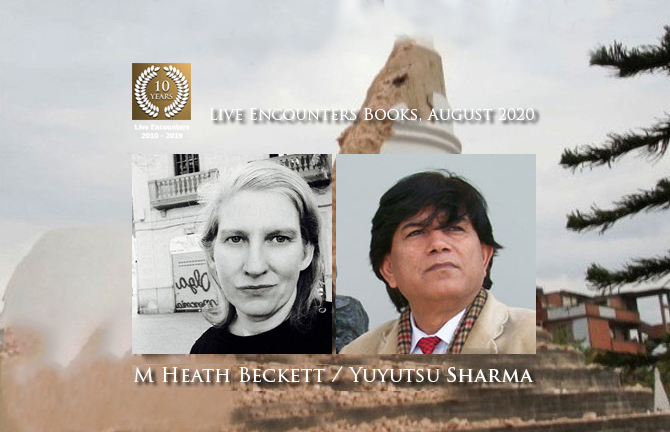 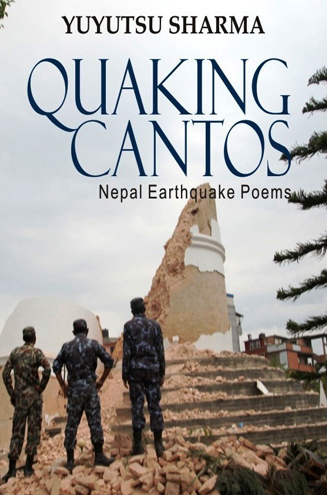 Yuyutsu Sharma’s Quaking Cantos provides an unsparing visceral portrayal of the earthquakes that ravaged Nepal in 2015. The indomitable power of nature, described in Head-Piece as ‘God’s great hammer,’ shakes through Sharma’s poems in a way that acts as a reminder of human frailty in the face of such a fatal disaster. Unsparing portraits here reveal the abject and merciless suffering experienced across the full human spectrum: baby, grandma, poet, priest, mother and father set side by side in pages where passion and skill combine to create a most sensitive, nuanced response. `The story of the surprised house-holder of the creature-like survivor, in Head Piece, his home become carapace; the baby’s helpless search for her mother’s breast, and the deranged man ‘bandaged,’ in dust and rubble, testify to a poet who seeks for specific details as a reply to the individual situation of each one of us. The houses in Sharma’s poems also have character. ‘Dolakha houses, wayward travellers…’ As such, Sharma personifies the way fabric of landscape and community also has suffered to dramatic effect.

Sharma’s poems are not without humour: he has a deft touch with irony in Cosmic Sleep, describing the way the devotees have forgotten new found commandments and ‘mumbled names of the Gods they had denounced’

Sharma’s poems flag up the role of the poet as a voice of suffering and recovery: a voice that commemorates victims and also celebrates resilience, as so potently portrayed in poems such as: ‘Reeking Armpits’ and Course of Courage, where  grandmas squat ‘like fearless goddesses.’

Quaking Cantos shows that Sharma is a voice for our times, able to meet challenging situations with poetic fluency, sensitivity and strength.

Recipient of fellowships and grants from The Rockefeller Foundation, Ireland Literature Exchange, Trubar Foundation, Slovenia, The Institute for the Translation of Hebrew Literature and The Foundation for the Production and Translation of Dutch Literature, Yuyutsu Sharma is a world renowned Himalayan poet and translator. He has published ten poetry collections including, The Second Buddha Walk, A Blizzard in my Bones: New York Poems, Quaking Cantos: Nepal Earthquake Poems, Nepal Trilogy, Space Cake, Amsterdam and Annapurna Poems. Three books of his poetry, Poemes de l’ Himalayas, Poemas de Los Himalayas and Jezero Fewa & Konj  have appeared in French,  Spanish and Slovenian respectively. Half the year, he travels and reads all over the world and conducts Creative Writing workshops at various universities in North America and Europe but goes trekking in the Himalayas when back home. Currently, Yuyutsu Sharma is a visiting poet at Columbia University and edits, Pratik: A Quarterly Magazine of Contemporary Writing. https://niralapublications.com/nirala-authors/yuyutsu-rd-sharma/
https://yuyutsurdsharma.blogspot.com/

M. Heath Beckett is a British poet currently completing her MA at Royal Holloway University. She grew up in Yorkshire drawing inspiriting from the gothic folklore, the moors and the ruined abbeys of her surroundings. Maria has written three collections of poems, and has two novels and a memoir underway. Her writing has been published by George Whitman, Strands Magazine and Torriano poets. She is a regular performer at London’s literary salons.