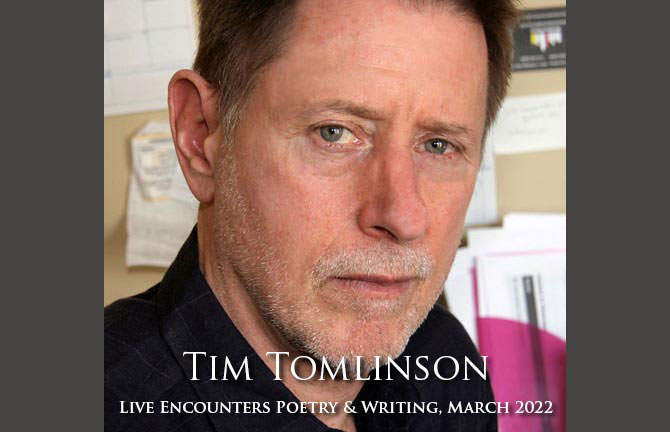 Tim Tomlinson is the author of the chapbook Yolanda: An Oral History in Verse, the poetry collection Requiem for the Tree Fort I Set on Fire, the short fiction collection This Is Not Happening to You, and co-author of New York Writers Workshop’s The Portable MFA in Creative Writing. He is a co-founder of New York Writers Workshop, and a professor at New York University’s Global Liberal Studies. He lives in Brooklyn, NY.

The Chinese woman hated her mother. All the stories she submitted for her tutorial concerned how hateful her mother had been, and continued to be, now that the mother was visiting, ostensibly to assist in caring for her daughter’s newborn, a boy with long fingers and a face like the Buddha. The story drafts frightened him, the specific gory violence of their fantasies, the raw vehemence of their hatred. For instance, in one, to spite her mother, a daughter hacks her newborn to pieces with a cleaver. He tried, once, to talk to her about the benefits of letting hatred go, an idea she opposed so categorically that he felt certain she was about to fly out of her seat and strike him.

On the walk home from his office that night he remembered a time when he was a graduate student in China. He’d arrived at a conservatory in Guangzhou where he’d won an artist-in-residence fellowship. His accommodation was a cottage situated apart from the campus’s main buildings, in the midst of a wide expanse of lawn. It had two levels. The ground level was for working—it had a table with chairs, a desk situated at a window overlooking the grounds, and a kitchenette style cooking area with a hot plate, a toaster, a small refrigerator, and a sink.

The bedroom upstairs was under a pagoda type ceiling that swept upward to a peak in the middle. Upon seeing that cottage for the first time, from the outside as his guide led him in its direction, he remembered thinking, I’m going to get so much work done here, and all of it will be informed by this iconic traditional architecture. Already strange but pleasant shapes formed in his imagination.

That impression changed only slightly when, at the doorway before entering, the guide muttered something that sounded like an incantation, and explained right after that a spirit, a nü gui, was rumored to live in the cottage, on the second level, and that she could appear to be malevolent, at least if one were to believe some of the previous residents’ reports. He assured his guide in his rudimentary Chinese that he was not concerned, particularly because he didn’t even believe in that kind of thing.

They say, his guide told him, that in order to be frightened, in order to experience any aggression from the nü gui, should she even appear, some level of belief in just the possibility of her existence was required. Still, it was prudent to the offer the incantation, which amounted, really, to a character reference assuring the nü gui of the visitor’s basic decency; she should have no objections. Most of the complainants, he continued, had been Chinese in particular, or Asian in general.

The white westerners, like him, they rarely complained. Later, it was that “rarely” that rankled him. And that night he was glad to have packed a bottle of cognac in his luggage. He filled his glass several times before climbing the creaking staircase to the second-level bedroom, where everything appeared to him as soothingly mystical, including the moonlight pouring through the windows whose shades he left wide open. He lay on his back with his hands folded on his stomach and his eyes closed, he imagined he could hear the plaints of a distant erhu, and in a short while he drifted off into a comfortable sleep … until violent shrieking startled him wide-eyed awake, and there she was, not even a foot above his body, dangling like a spider from that crease in the ceiling, wild black hair flying, a gauzy red dress billowing, and between two narrow slits of eyes a contorted rictus of a mouth wide open screaming bloody murder.

He opened his own mouth to scream and choked on the long black hair that rushed into the opening like the tendril of an octopus. He flung back his covers and ran, choking and shrieking for the stairs, where he half ran and half fell to the ground level, and continued to choke and shriek and run and fall across the campus lawn until he beat with both fists against the locked doors of the main building. When a security guard appeared, he pushed the guard aside and ran into the building looking wildly about for a place to hide.

The guard found him some minutes later. He said the nü gui had receded, and that she was perfectly harmless anyway, and that it would be safe now for him to return to his residency. It embarrassed him later to recall that he never returned to the cottage at all. The guard found him a blanket and a couch to sleep on for the night in a big wide room with all the lights left on. And at sunrise, the guard agreed to retrieve his belongings. He called for a taxi to take him to the airport. He forfeited his residency, and he lost nearly all interest in China.

All of this resurfaced because of this mother-hating Chinese woman whose work he now mentored. He felt that he would have to terminate the tutorial, despite its being lucrative. He felt, too, that he should warn the mother about her daughter’s violent ideations. Some of them were truly gruesome and all of them reached the same conclusion: the bloody demise of the mother, punctured and carved and sliced in retaliation for all the ugly things she had earlier enacted upon the daughter’s psyche and person.

But against his better judgment, he kept silent and continued to work with this disturbed woman, who paid him well, in cash, with large sums in advance. He needed the money. And he continued to be bothered by that attack of the nü gui. Why him? He came from a different world, a different culture, and at that point in his life, when he was still quite a young man. He hadn’t yet done anything you could call truly terrible to women.