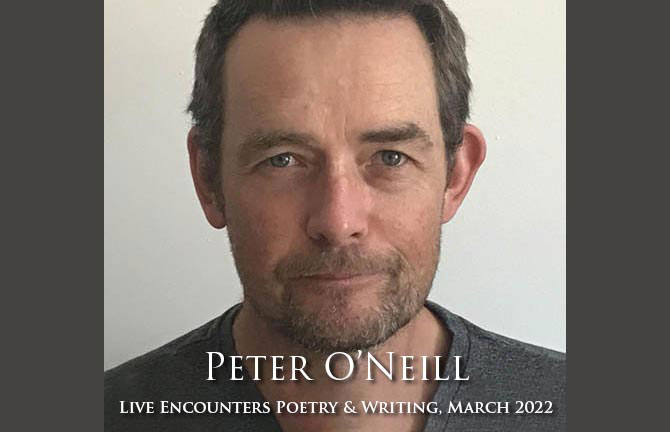 Peter O’Neill is the author of six collections of poetry, the most recent Henry Street Arcade (Éditions du Pont de l’Europe, 2021) was translated into French by the poet Yan Kouton and was launched as part of the bicentenary celebrations for Charles Baudelaire as part of the Alliance Francaise celebrations, early in April this year. He also headlined the spring issue of Pratik with his fellow team of poets and translators who appeared altogether in a virtual day- long celebration of the French icon. He has also translated The Enemy – Transversions from Charles Baudelaire (Lapwing, 2015) and has written a hybrid novella More Micks than Dicks (Famous Seamus, 2017) which is a satirical account of his time presenting at  international Beckett conferences. As well as French, his writing has been translated into German, Italian, Arabic and most recently Spanish. He has a degree in philosophy and a masters in comparative literature (DCU). He lives in Dublin with his family where he prepares international students of English for the IELTS.

She sat opposite you under the great stained -glass window
By Jim Fitzpatrick in Bewley’s. Over her shoulder, I
Informed her, Harry Clarke, my other hero –
the illustrator of Edgar Allan Poe- had designed

The other windows. It was all perfect vision in glass.
The coffees came, mine Peruvian, hers a Café mocha.
She loved both coffee and chocolate, she informed you.
While drinking them, you both spoke about the Law .

Despite the fact that her narrowly sculpted face
Revealed very finely refined features, her mind
Was wrought of steel, steadily imbedding itself

In the discourse, charting its course like a vessel
Intent on completing its journey despite the incessant winds,
Her mind clearly bent on thoughts of crime and murder.