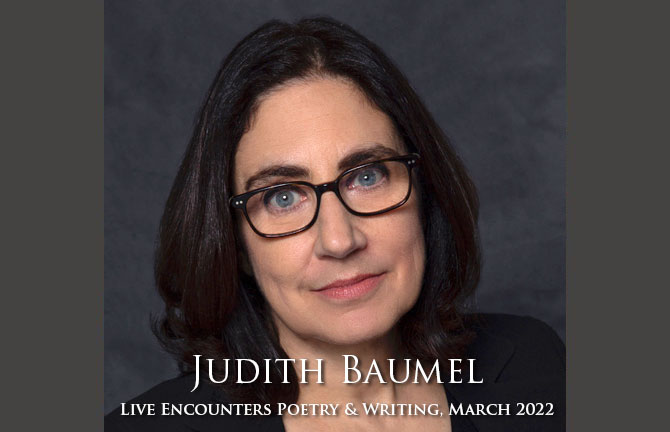 Judith Baumel’s books are The Weight of Numbers, for which she won The Walt Whitman Award of the Academy of American Poets, Now, The Kangaroo Girl, Passeggiate and the forthcoming Thorny.  She is Professor Emerita of English and Founding Director of the Creative Writing Program at Adelphi University. She has served as president of The Association of Writers and Writing Programs, director of The Poetry Society of America and a Fulbright Scholar in Italy.

Dohong was “the presiding genius of the Monkey House”

These days the houses at the zoo are closed—
the stench, the darkness dissipated now,
repurposed concrete beaux-arts shells surround
the Sea Lion Pool and Daily Feeding Show.
Aquatic Birds, the Monkey House all closed,
the Elephant House where infant Sam, the girl,
was once as old as Sam my son.
A TV bank commercial lately shows
a mother with a phone and paper check.
She snaps and automatically adds
the money while she visits at the zoo.
Her daughter worries that a pic could send
a lion to the terrified bank branch.
Before the ATMs made money fast
and easy, banks held vaults of coins and jewels.
These grand pavilions stood for what we thought
we stood for in the natural world. And so
within here Ota Benga Pygmy man
would cradle Dohong the orangutan
while living in a Darwinian display,
exhibited together in ‘06.
The aftermath was worse. He was a free
Virginian when he pulled the trigger of
a stolen gun and closed his body’s head.


My family walked on Indian paths where the Lenape
turtle, hidden in hemlock and beech, still aimed
at the Bronx River, and to the Hutchinson River,
to Oostdorp, your dwelling rimmed by sweet grass.
They said you were delivered of thirty monstrous
births none human. They said you hid where the tree
had split the uterine rock, that uncertain canal
as you passed from the very bowels of this life


from “The American Cousins A-Z”

Where does she think she comes from
Cousin E asked. How to say, I mean pronounce,
propose the rhythms, stresses, elisions
elite names demand as they signal coded
coiffures, spartan deployment of gemstones,
genteel grips of the fork sinistral, the dedication
definitive and unambiguous to deprivation, the prideful
preference for a two-bar electric radiator in the rococo fireplace.


H: I’ll call you from the other side

The neutral is disconnected and the lights are dimming.
This is a level one call. Technicians will respond
within a week. The live line is draped through the trees,
the downed limb hanging on the line.
This is a level three call. Technicians will respond
within a month. Be sure to call the utility
if your lights are flickering or if you smell gas
or if there is a hurricane in the area or a tornado
or if an ice storm drags everything down.
Be sure to call. Cousin H was on the hook throughout.

Cousin P was sweeping
into the Broadway IRT, her long skirt
a kind of broom, the fuzzy rickrack hem
picking up dirt, a kind of self-satisfaction
with the blind rosy radical fear she brought.

T: Lassitude was a Goal

Cousin T had constructed a “sleep plan” which
focused most her days and became for her a minor
religious form like the proto-Christian-Shinto sects
that shot out of early twentieth century Japan
and tainted so many, though, of course the sects
worked against lassitude. It was why, maybe, she worked
so hard to achieve it. Not as easy as you think,
not as simple as napping, or sleeping in, or turning in
early. It was something to be pursued
with rigor singled mindedly.