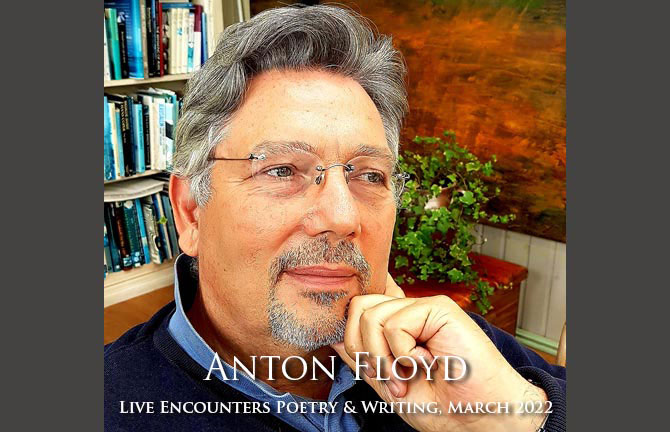 Anton Floyd was born in Egypt, a Levantine mix of Irish, Maltese, English and French Lebanese. He studied at Trinity College, Dublin and University College, Cork. He has worked in the eastern Mediterranean and now lives in West Cork. Poems widely published in Ireland and internationally. A member of Irish Haiku Society, he is several times winner of International Haiku Competitions. A selection of haiku is included in Between the Leaves, an anthology of new haiku writing from Ireland edited by Anatoly Kudryavitsky (Arlen House, 2016). His first poetry collection, Falling into Place was published by Revival Press in 2018. He edited Remembrance Suite, a chapbook of sonnets by Shirin Sabri (Glóir, 2018) and an international anthology of poems, Point by Point (Glóir, 2018). He received the 2019 Literary Prize awarded by the Dazzling Spark Arts Foundation (University of Macau, China). A new collection, Depositions, delayed by the pandemic, is forthcoming from Revival Press in 2022.

:for here there is no place
that does not see you. You must change your life.
Archaic Torso of Apollo, Rainer Maria Rilke

I stand in awe before them, sense
their fixed purpose is directed at me.
Have they fallen for the trap of believing
I have the knack of freeing them?
This muscular aching demands relief,
a frank response, a desperate act.
I can only offer a poem. The one
I am drafting in my head begins
with the history of false starts.
Thoughts buckle under the heaviness,
this weight of obsessive memories –
so many midnights of the unnamed.
Every line is a strained sinew.
No deliverance yet – we stumble,
keep falling in a world of flaws,
unviable births and stifled breaths.
What poem can confront this enormity?
Justice, and not the vanity of grief,
is the auroral shock across the dark.
With some force of will
words, like hammer blows,
must come rough-hewn.
If any poem is equal to the act
it must come from the gut
with words to cleave the general ear,
must speak the heaving struggle
to escape the yoke, these marble shackles.

At George’s Head the beetling cliffs
heave to a halt. Headlong and roaring
the waves crash into them and splinter.
Foamy shards, wind-blown like a flock
of gulls, splash the sky and muted
fall to the slabs of rock at the base.
Look! Look there: how the suck
is downwards into the salt swirls,
those feathering skirts, toying like sirens.
Yet think of this: between massy pulses
tides turn. Time will draw the waves
into a fine line along the horizon.
So hold, my heart, heave to. Wait then
for the tide and that distant levelling.

Some things stay with you.
The pathways are neatly laid out.
Yesterday’s white storm birds
have gone. Someone has tidied
any leaves stripped by the wind.
We move in preternatural stillness.
The midmorning churchyard sun
feels like a hand on my shoulder.
Yews, those evergreen mourners,
stand reverential. Lichen covers
the carved markers. Each stone,
enduring wind and rain, carries
a name, each one a local history.
We come to her grave. A cot death,
you say, a mystery, and how her tiny life
has filled your years. You were bereft,
you add, and those few days remain
opaque, lost under a glaze of grief.
Friends, neighbours, calls, food,
undertaker, all the arrangements
fastened by unseen hands.
I set myself to speak a prayer,
instead I imagine the unbearable –
your child in a tiny white casket
like a frosted cake; the cold ground;
my mother burying her two girls;
ah no; the years, the years reeling.
Then you tell me how the ease came
– here the jolt of unexpected care –
the sexton had dug and lined the grave
with moss and starbursts of wild flowers.

Flinn with an ‘i’
because there is no letter ‘y’
he said, in the Irish alphabet
and he always one to be authentic,
the quest that drove him
the restless spur
to be at one
with the voice inside him
the one protesting him to song.

Whatever pulses beat
their rhythms in his blood,
whether the sounds
inside his head came
as single notes or chords,
the overtones
made and unmade him
an alien at home
and at home only wherever
his music would take him.


One summer evening
I paused to see him run
on the tidal sands
under Bray Head.
He was wearing white
as if condensing light
the speed and ease
in the way he ran
belied whatever torments
he was trying to outrun.


Years later found him
in Cyprus at our door,
the wild minstrel boy,
guitar slung on his back.
The shortest way to Tara
and all that, he said.
He was on the run again
from the shrinks in St Pats
holding a sackful of songs
and exclamation marks!


For the beach hotel
where he found work
his papers stated
first alien, then musician.
He was in his element
a five star entertainer
in a sharp white suit,
a red rose in his lapel.
On opening night he said,
This is my green carnation.


The season over he left
thinking he’d be back
but only rumours came:
another stay in St Pats
and then the news;
he had walked into the sea
holy and broken.
There was an order of service,
the envelope it came in,
and silence the purest white