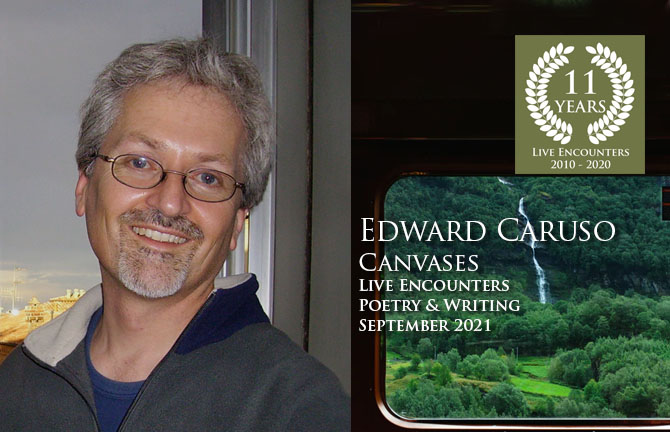 Two bicycles abandoned by a river of glass,
the owners, hand in hand,
gaze at clouds, a song of roses.
Somewhere there’s an older canvas.

Childhood vignettes.
A male face the painter no longer recalls,
his mother closing herself away with him,
two cigarettes side by side.

A white gravel pathway.
An estate’s fields lined by poplars.

He’d work with his brushes and canvases,
the talcum powder voice of his mother’s companion
distanced, as he’d lose himself
in his own landscapes.

Strands of plaited hair,
fine red clothes with folds and lace hems.
The inviting skin of a wife to come.

The world, one of impressions,
different perfumes
and bottles of wine kept
in his mother’s room.

A wisp of hair in a drawer …

His mother’s companions,
he’d take their mantle
with future lovers,
mother long gone.
Those who unearthed the shadow of a man
who could never find himself,
despite the self-portraits he lived with
and the people who sought him out.
They were all outcasts.
His a world of wild rigging
stranded in uncompromising surf.

From a train window,
rear carriages in view.

Through pastures and towns
barely recognised, but within,
the sun emerges,
also within.

There isn’t a moment without movement,
seconds that outlast thoughts.
Consolations that open
one’s life, definitions or pages
that have to be rewritten
or abandoned.


If anything is ever
wasted or tossed,
the clear light of a discarded sky,
landscape in bloom,

whatever remains,
lives or horizons,
moments survived
long after their vanishing.