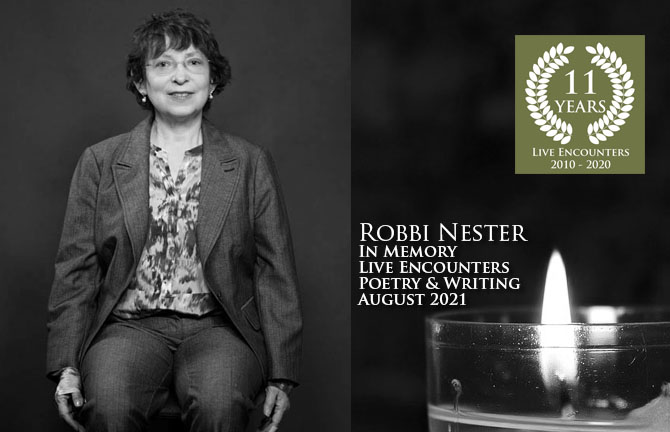 Robbi Nester is the author of 4 published books of poetry, the most recent being Narrow Bridge (Main Street, 2019). She has also edited three anthologies of poetry, including one published this year, The Plague Papers, which appeared as a special issue of Poemeleon Poetry Journal, http://www.poemeleon.me/peruse-the-gallery Her most recently published poetry has appeared or is forthcoming in Tiferet, Verse-Virtual, Sheila-Na-Gig, North of Oxford, Negative Capability, Book of Matches, MacQueen’s Quinterly, and Gargoyle. Her website may be found at http://www.robbinester.net.

In another life, my father might have been
a farmer, tending cows and horses,
harvesting tomatoes, peaches, fat ears of corn.
Instead, he worked indoors in factories
with no windows, drove a truck
delivering pies or milk on long dark
winter highways before dawn.

One spring, he handed me a catalog
asking me to choose some flowers
for our tiny patch of lawn.
I pondered photographs of grass,
as smooth as painted plaster,
diffident lilies, pansies with their Pekinese
faces, then chose a rose tree
with three different color blooms—
yellow, white, and red. He placed it
in the center of the yard so every
summer day there’d be roses
bursting from each branch—
not only those three colors, but pink
and orange, streaked, as though
some playful painter had been mixing hues.

My father saved the seeds of every fruit,
dried and planted them—mostly shrubs
that couldn’t bear in our cold climate.
For all his hope, they seldom yielded
anything, except a jungle of wild vines.
Tomatoes nestled in the crabgrass
and wild garlic, burpless cucumbers,
and once, a tiny watermelon. The neighbors
scowled at his manic enthusiasm, insisted
all this growth drew rats, but every child
knew where to find a rose, red cockscomb
sentinels along the hedge. I never miss
that neighborhood, that house,
except this wild profusion that spoke
best of my father’s generosity and love.

My parents died at 94, and yet the shock wave rocked
the quiet chamber of my life, exposing all the weakness
in its frame and beams. I watched my father die,
followed his ragged breath for days, a stony path
twisting up a barren hillside. Four days later,
I held my mother in a cardboard box, bone
and ash much heavier than I’d imagined.
For weeks, I’d think that I should call my father.
I’d have the same dream every night, waking
with my heart loud in my ears. I had left
the gerbils without water, forgot to feed
the fish for months. I knew what I would
find, returning to my parents’ house,
the bodies I would have to claim.

In high school, I worked weekends at Martin’s Aquarium,
an urban zoo selling tropical fish as well as plants and lizards,
snakes, and parrots—even a few bedraggled monkeys who
made our lives hell with their screaming, throwing scat
every time one of us passed the cage. One Sunday morning,
I was scooping dead fish from newly-stocked aquariums,
filling up a garbage bag with faded neon tetras, stiff six-inch
Plecostomus, a whiskered arowana, long as my arm, when
I caught a funky whiff of something—not a fish. Next
aisle over, where the feeder mice were kept, a tank of gerbils
ran squeaky circles on their wheel, guzzled water from
the bottle, groomed and fought. Only one stayed still.
I took the top off, picked that one up by the tail. Four
pink swollen orbs, maggots fat as my big toe, fed on
her skinless belly. My mind insisted they were
baby gerbils. I’m not squeamish. I’ve picked up
smelly bloodworms by the handful, let caterpillars climb
my arms, but this came too close to my own malleable flesh
for comfort, thinking only in the abstract about the beneficial
cycle of rot and renewal, birth and death. It wasn’t just
an error sparked by my scant experience of death,
but an insight that I still can’t shake.

When I was very young, my parents bought a house
on the outskirts of the city, a new neighborhood,
where everyone was just like us, young Jewish
families. They sat outside on summer evenings,
eating Good Humor bars and watching everyone
walk by. I would have been a tough fit anywhere,
the stranger in the crowd, but at five, I didn’t
know that yet. Later I learned about Elijah,
who’s always begging at the door, asks to be
welcomed in. At every Seder, every synagogue,
the empty chair and cup await him. I played
this role. It was I who stood outside the red
brick row homes, all alike, with their steep front
stoops, neat hedges, roses in the yard, watching
the other children playing wall-ball, hopscotch,
jumping rope. I couldn’t understand what
made me or my parents different, or why this
meant we had to take the back way out, avoid
the neighbors’ hard eyes, mocking voices.
My parents never questioned: it was a test
of righteousness. Almost none passed.
Now I’ve lived long enough to play both roles:
the stranger and the one who shuts the door.

When I am stressed or caught up in the world’s
bad news, I ride the train down to the aviary
at the San Diego Zoo, where Birds of Paradise
approach my open hand, and nesting
toucans peer out from their box
high in a banana tree, broad leaves
ribbed like feathers in a parrot’s wing.
There are benches where I can be
anonymous for hours, watching
hummingbirds delve scarlet bromeliads,
white ginger lilies, with their spicy scent.
I read, or listen, watch the birds in their
small jungle alongside species they would
never meet in ordinary life—crowned
pigeons from New Guinea, with their
orange eyes, blue plumage, stalk the same
paths as Egyptian Ibis. Other small creatures
haunt the branches, like a family of pygmy
marmosets, with tiny perfect hands,
strangely human faces, or dik dik, mouse
deer, calmly browsing on the flowers
and the fruits, almost invisible. An orange
Cock of the Rock stands before me on the
railing, bright Bee Eaters whiz by my head.
Under the waterfall, Roseate Spoonbills feed.
I always feel at home here, with other bipeds,
who do not seem to judge me for my want
of feathers. I’m simply part of their ecology.
By the time I leave, it’s late. I track the nascent
moon through the wrought iron of the aviary.