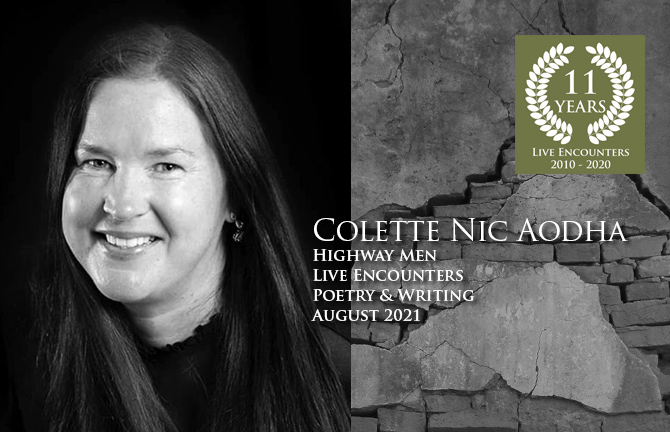 Colette is an award winning poet who resides in Galway in the West of Ireland. She writes in both Irish and English. She has fifteen publications which include a volume of short stories, Ádh Mór, as well as an academic study of the blind poet Anthony Raftery, an 18th century bard whose songs and poems are still recited and sung today. She has one volume of English poetry, Sundial, which was published by Arlen House Press, She also has two dual language collections of poetry by the same publisher; Between Curses: Bainne Géar, and In Castlewood: An Ghaoth Aduaidh. Her work is on the syllabus in Primary, Secondary and Third Level colleges. Colette’s latest collection (bilingual) is titled Bainne Géár: Sour Milk, which is available in hardback and softback, published by Arlen House, 2016. : Colette is pursuing a PhD in the English department of NUI Galway; she also has a master’s degree in modern Irish. Her newly published collection of Irish language poetry and art is entitled Réabhlóideach is published by Coiscéim, Dublin, 2020.

This Poet’s trail incorporates prizewinning bulls
from the Cooley peninsula, efforts at a new map
to stretch from the base of Sliabh Gullion to Feadarna Bog,

(we no longer fear to speak of )
Highway men who rode this terrain,
robbed aristocrats to feed the needy,
written out of history but were Seventeenth Century local heroes,
many hanged without mercy, let us honour their bones interred in Creggan Graveyard,
next to the poet McCooey’s, other Armagh bards, Ulster O’ Neill clan, their ancient Kings and patrons.


Centuries later a farmer poet rested under Feadarna Bush,
picked stones and brown clover for his grave,
his words resound in the blooms and grasses of hedgerows,
the flutter of birds in trees and the serene summer skies over Rassan.

In my Father’s House

A closeup of friends and falling feathers
darkness is built brick by brick, history
and memory keep this house

built with human skin, existence is fragile,
fish without gills, chairs have no seats
turrets and hallways manipulate space

Broken records play Warhol’s unfinished symphony
next to the Judgement of Solomon
which depicts life, death and the dignity of age.