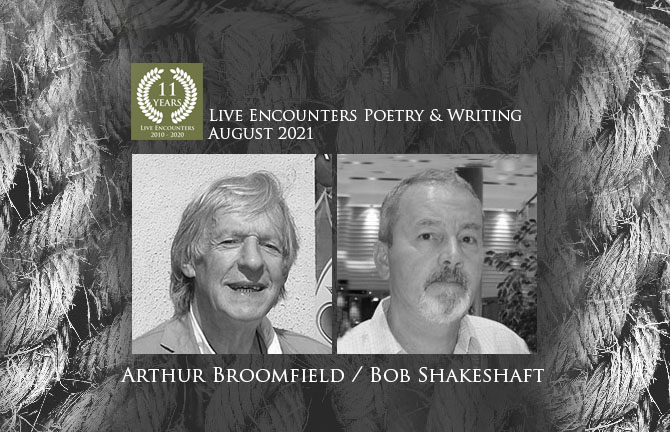 Auld Rope  is Bob Shakeshaft’s, overdue, first collection. The work is set in two parts, ‘Exteriors’ and Interiors’. Most of the poems are located in, or influenced by the area of the city, Linenhall Street., where the poet lived for some time. Auld Rope, as the title poem implies, is a trip round ‘Old Dublin’ that recalls characters and events, often laced with grief or redemption, from an age that is in danger of slipping from the memory of even those born then and will be a reminder of their heritage to the OMG generation.

In ‘The Rag ‘n Bone Man’ the boy trades his father’s ‘worn, torn suit, or soleless size nine shoes’ for a goldfish or two. ‘Granny Reilly’ sells ‘Nuts for the monk-ees, / a ha’penny a bag. /Ask your Ma’n’ Da’, ‘Chance the Ducks’, is a lexicon that will be known to only the purest Dubliner [ but which the author kindly translates in his notes, for the rest of us], Shakeshaft paints an authentic picture that is as far from the myth of ‘the literary city’ as Linenhall Street is from Davy Byrnes.

Loss and grief that feature in Auld Rope reflect their intrusion into the life of the not immune from poverty community of Linenhall Street. In ‘Endings,’ and ‘Toddles’ the poet mourns the death of young siblings. ‘My sister was laid quietly in the dark earth/ while larks sang high above it.’ [Endings]. In ‘Toddles’, one of the best poems in the collection, the father brings the tom-boy-whistling child to Glasnevin Cemetery, on the bar of his bike, to lay flowers on the grave of her brother, Danny. The girl folds into the father’s ‘safe-heart-pumping love, he chins my crown/ letting me know all is well.’ It’s not till the father kisses Danny on the wooden cross over the grave, that we feel his grief, ‘Pure, whispered words pour over our lips’. The irony of Father shielding her from the grief through singing ‘Danny Boy’ in his ‘booming voice’ may have escaped the child – but not the poet.

‘Interiors’ is an introspective series of poems that deals with the descent to death of the aged mother, where, if life   be ‘the flash of a falling star’ [‘Thoughts’] the poets focus is on the long goodbye of the falling. ‘She sits alone in a black, chilled room, / an ash-free grate…she sits, forever lost, absorbing / her last memories of heat [‘Austerity’]. ‘Sunday…vanished like a breath / on a mirror…Ah, death never looked so kind’ [‘Death in vain’]. In ‘Stairway’, the mother has died, leaving the poet space to reflect on the ‘sin’ of her out of wedlock pregnancy and the guilt he feels she transferred to blame of him. ‘Church guilt, a tormented family / throwing you out…you could not love me’ ends with the poignant line ‘could we be strangers again?’ ‘Sunflower’ is a touching tribute to the late Sarah Lundberg, who will be long remembered for her contribution to the Irish poetry scene and for her encouragement of emerging poets, ‘Do not seek me in the shadows’. The brutality of the Christian Brothers is the subject matter of ‘Blind Shame’, a poem that speaks of the horror of child rape by one of that order, and in ‘Empty’, ‘No terror stepped out front / and centre. No outstretched hand.

Auld Rope will draw Dubliners back to their roots and will fascinate the world of non-Dubliners. Bob Shakeshaft writes in language that is original and unpretentious. It comes from the heart and will surely cause many a flutter in the hearts of true Dubs. His is the unapologetic voice that will ensure the lasting future of a Dublin that is in danger of being forgotten.

Dr Arthur Broomfield is a poet and short storywriter, Beckett scholar and occasional lecturer from Ballyfin County Laois. He is the author of seven books including three poetry collections The Poetry Reading at Semple Stadium [ Lapwing 2012] Cold Coffee at Emo Court [Revival 2016] The Giants’ Footsteps at the Rock of Dunamaise [Revival 2019] and a study on the works of Samuel Beckett :The Empty Too : language and philosophy in the works of Samuel Beckett [Cambridge Scholars’ Publishing 2014]. He delivers poetry and short story workshops and is available to mentor writing groups or individual writers and to give lectures on the works of Samuel Beckett and on Surrealist poetry. Dr Broomfield holds BA degrees in English and history from NUI Maynooth, an MA degree in English literature [NUI Maynooth] and a Ph.D in English literature from Mary Immaculate College, University of Limerick.