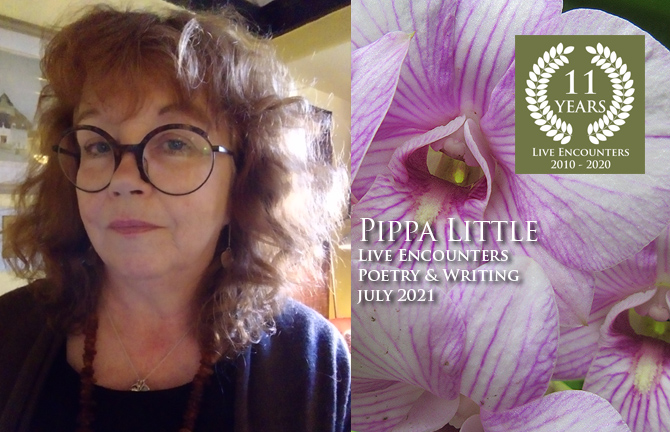 Pippa Little is a Scottish poet who lives in North East England. She is a former Royal Literary Fund Fellow at Newcastle University. Her third collection Time Begins to Hurt comes out from Arc Publications in 2022.

At The Evening Table

For Jean and Jack Dagnall on their Diamond Anniversary

Come, this is your place, and yours.
You have filled the jug with light, with blue hours.
The cloth runs white as river-spate
where you’ve tidied the half-read books away.

April, you light the lamps later and later,
dusk rustles, dances in taffeta.
Come, the bread is warm, the moon is full,
sons long grown hang jackets in the hall.

I would bring bride-blossom, swallows’ wings,
salt-grain diamond, holy labyrinths.
But this circle, this feast, is yours. Twofold
you’ve filled the sixty years you chose.

Come, there is love enough, spilling over
for slow endearments, for memories’ soft blur
just as the first drop of light, shared
from wick to wick, multiplies like stars, like prayer.

Early in Mexico City: here, afternoon.
In his Pudsey bear onesie I watch him pull on boots,
look around for the magnifying glass:
busy busy! He wants to be out searching for his newest
obsession. My phone screen dips and his head slices away
to ceiling’s sloping crack which trembles until, righted,
we are almost matched again.
He is speaking a lot now, Spanish with English,
I catch some of it but exploring waits and his father, sleepy,
says he’ll call again later. They fade into shadow.
Almost three, locked down for weeks,
what will he remember – small things without a story,
the turning over of a stone, flood of silver-black silences:
will I ever tell him in years to come
how much it moved me when he went to investigate his world
of garden size with such fierce love of look! come! see!

Famous down in that province
near the Mozambique border,
word of mouth tales still told
years beyond his death. My father liked him,
the almost unclothed man who calmed
the deadliest of vipers,
who smiled while they travelled his body,
curled up by his feet, relaxed around his neck –
he could have been a shaman, sold spells and cures,
instead he lived like Ghandi.
Humans troubled him, he said, while snakes were pure
in their lowliness. Their touch was warm, dry,
their bodies’ press slow and constant upon his skin
like the rains’ whispering.

How Long Were We Gone

You lifted the broken wing
of the wreckers’ yard, pushed me in,
ran down its overhang
looking for smash-ups.

Safer in tight spaces,
stoved-in roof, foisty leatherette,
I fossicked for lost things,
found St Christopher
in a foot well.
You climbed till you could see
your house from the pearlised summit
but how long gone from my unpronounceable country I was,
how the cold light lasted and lasted!
I only wanted it to be dark,
for birds to roost around us, infilling
our rifts and traces, unseen but for their settling
livelong and syllabic as water.

Now in this room far north of middle age
I watch sparrows burst out from whitebeam islands,
gulp across the sky as if drowning
but just at the last gasp plunge on.

How do we learn
which sanctuary, which threshold
when so much is missing between the spaces?