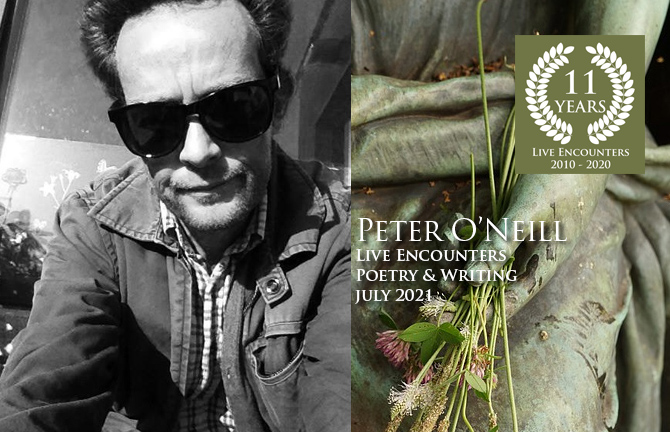 Peter O’Neill is the author of six collections of poetry, the most recent being Henry Street Arcade a bilingual collection translated into French by the poet Yan Kouton (2021); a novella More Micks than Dicks ( 2017) and a volume of translation The Enemy – Transversions from Baudelaire ( 2015). With a background in philosophy and comparative literature, he is currently working on a novel inspired by Raymond Chandler’s Big Sleep. He has edited numerous publications, including two anthologies of poetry, organised and hosted a number of literary festivals and readings, most recently the bicentenary celebration Baudelaire at 200! for the Alliance Francaise in Dublin. His writing has been translated into French, German, Italian, Arabic and most recently Spanish.

The book, a first edition cocooned in
The gentle dusty aroma of slowly baked
Paper whose electrical element was the Sun,
Rests before you – a cultural monolith.

And from it your past too is in freefall.
At the year of its printing, you had just been
Out of school some three years, not yet still quite
Out of earshot of the menopausal rage

Of your poor mother. She who, like so many
Of her Sex, had been charged all her life with
Phrases like, “Bats in the belfry!”

And what do we as men know about it?
Measuring our own short lives to Christ’s,
While the blood of so many moons has frozen over.

As the semen count mounted in countless pair of testes,
As the alignment of syntactical structures
Erupted in cataclysmic fashion;
Dust particles, in the form of microcosmic

Arachnid faeces, covered the shelves in a film
Which needed to be continuously cared for,
While tides, moon governed, came and went,
To the creation of countless almanachs.

And the soft skin of ageing men transformed
Into Twelve O’Clock shadows, causing the
Redistribution of wealth in countless pockets,

Employing a veritable army of Barbers,
Thus igniting numerous gossip and ‘stories’,
And so creating much intrigue in every town.

On the Immortality of the Soul

The Redundancy of the Soul took place
After the inventory of the heart had been carried out,
Whereupon the results were clear to all;
Mere words can kill both a woman or a man!

So, where can you find the soul of anyone today?
Somewhere in the halfway house of coming and going,
There in the antechamber of every atom.

Wait for her to come again, as she will come.
Yet, look to her returning as if it were the first,
For her name, like your soul, is an immortal one.

Passing the school, you enter the lane
And are soon confronted by an image
Straight out of Claude Lorraine- albeit
Minus the crumbling ruin or biblical motif.

Argo, your Jack Russell, is the only reference
To antiquity and which, rather comically,
He is completely unaware of as you peer
Rather intently at the ascent of the Birch-

The Silver Birch which rises rather poignantly
Towards the sky, above the other
Darkening boughs of fir and other darkened trees.

The cruelly torn strips of the bark of the birch unravel
In silver foils illuminated by the morning sun,
Their skyward branches are reaching constantly for the heavens.

Bachelard and his Phenomenology of Poetry

Here, creation is produced in the taut line of the phrase,
In the ephemeral life of the expression.
The well said is an element of the well lived.
Living poems, in this respect, always have the salutary

Experience of the Emergent!
Poetry puts language in a state of emergency.
Life is designated by its vivacity.
Such linguistic surges which emerge from

The pragmatic line of the ordinary
Contain in miniature the elan of vitality;
A micro- Bergsonism which abandons the thesis

Of instrumental language in order to adopt to
The thesis of a language of the Real will find,
In poetry, documents on the actual state of Language.

What flowering of mind when crowned with pain,
Thoughts haemorrhage and occur daily.
It is the stigmata audible on air.
“ C’est genial, non?” Her voice carries!

Transported on deux chevaux like Proust’s
Madeleine with the sounds of Massila Sound System.
( Oh Yeah!) And we enter Langue d’oc
Colouring the air superbly.

Resonating in burnt ochre, the clay of substance.
Richly spilling wineward and resplendent.
Thoughts then of Beckett & Dante.

The one evoking Arnault Daniel, the best
Wordsmith. The other Watt’s house in Rousillion.
And finally, the other Other in that old car driving through la Rochelle!