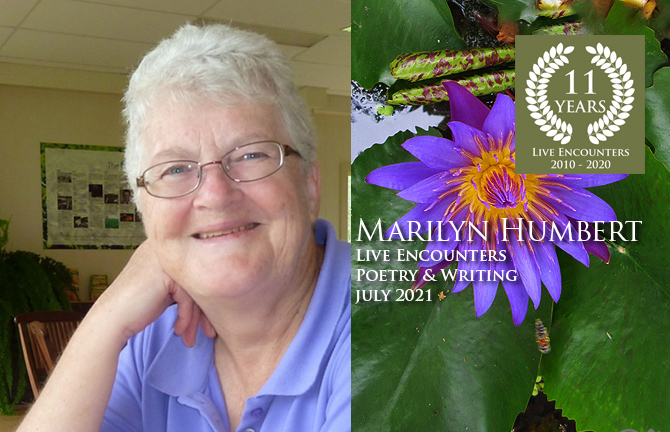 Marilyn Humbert lives in Sydney NSW Australia. Her tanka and haiku appear in international and Australian journals, anthologies and online. Her free verse poems have been awarded prizes in competitions, published online, in anthologies and journals most recently  Black Bough Deep Time 2, and FemAsia Magazine and accepted for publication in The Burrow.

It isn’t you unable to sleep
cuppa in hand, bored
watching the moon
needing to chat or debate.

The home where you live
is staffed by starched nurses
whose hands dole out measured meds,
and faces smile under dim lights.
The clock’s slow tick signing off
each moment to morning


In your sparsely furnished room
moonlit threads sneak
beneath drawn curtains.
Through the window gap
discontent riffles like leaves,

an unfamiliar voice explains
the ambulance has been called.

From the café laughter flares
above the sissing-mic and clinking
glasses, each sip fuels companionship.
Chiming forks and spoons intersect
streams of words, poems on A4 pages
recited with verve between mouthfuls
of coffee and cake. The applause.

You are a voiceless shadow
face pressed to the side-window
in the company of unsteady ghosts
from days worn thin with drudgery
no fixed abode and pension-queues.

Later when night heaves
its black mantle closer to dawn
ice-eyed stars deride your despair
and hunger for friendship
gnawing a hole in your gut.

Moonshine strafes a hunter,
an intruder on the range.
He’s ghosting through the shadows

eyes gleam with rising blood,
treasures rattle in his pocket. I watch
this unfold from two paces behind.

Little pad-foot, walking the overflow
seeps a muddy imprint and knocks pebbles
out of place under wavering golden wattle

among floral-scents on the evening breeze.
Passed a wrinkled eucalypt, the mopoke
statue-still. Moths spiral starlit

around an explorer and his shadow
beside boundary bottlebrush. Now
he’s tailing the snail’s silver-trail.

A dog barks. He lifts his curly head.
The porch light guides a weary
tracker back to base.

A leaf clutched in his small fist.