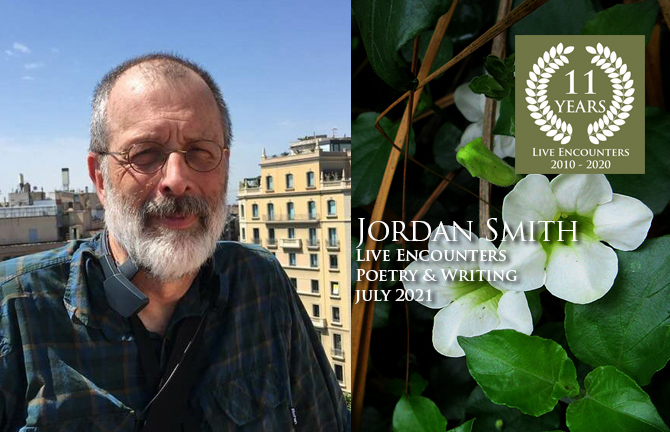 Jordan Smith is the author of eight full-length books of poems, most recently Little Black Train, winner of the Three Mile Harbor Press Prize, Clare’s Empire, a fantasia on the life and work of John Clare from The Hydroelectric Press, and The Light in the Film from the University of Tampa Press. He has also worked on several collaborations with artist, Walter Hatke, including What Came Home and Hat & Key. The recipient of grants from the Guggenheim Foundation and the Ingram Merrill Foundation, he lives with his wife, Malie, in upstate New York, where he plays fiddle and is the Edward Everett Hale Jr., Professor of English at Union College.

What is the color of a plague sky?
Breughel and Bosch agree, sister fire, brother ash,
On earth as it is in heaven.

But the clarity of this night, that cold certainty,
So many stars gathered
In configurations I never learned the names of.

I never thought it necessary,
Not with the lights of my house ahead of me,
Not with the maps I sketched in the margins of my journals.

The long black dog beside me watches the woods,
Her coat so dark it glistens silver.
She leans against my leg.

What is beyond us is untenable, unknowable.
If it were late afternoon, we might watch the hunters descend the hill,
Their lanky hounds, their paltry catch,

Through the snow to their unchanged village,
The little fires, the unabated hunger, and everywhere
The taste of ash.

She twitches under my hand. She might have scented something,
Some danger passing, some stretched shadow, some star falling,
Some cold omen in the warmth of her black hair.

Written in the Flyleaf of a Biography

Of course it is a page-turner.
Who would want it to end? Not before
The subject finishes his last book,
The one to redeem all the others.

Were you the muse he honored,
Your slight pressure moving his hand so smoothly,
Would you have whispered
How little time he had,
Would you have thought to add that urgency,

Have risked the ruin of his late style,
Easily clever and unhurried,
And just there, in the penultimate chapter,
The breakfast on the terrace above the lake,
As he described the bluish mainsail,
The little boat tacking across that headwind,


Gaining nothing. The paragraph
Went on too long. His coffee went cold,
And suddenly it was all labor again.

He closed the notebook, capped the fountain pen, your gift,
Ebonite marbled the same emerald as the dress
That framed your bare back as you turned,
When he asked you to, wanting
That glimpse, leaving the text unfinished, leaving

Him at wit’s end.

We know the soul must prepare itself.
We know the arduousness of the task, the brevity of the day, the master’s intransigence
Concerning the date of the contract’s completion and the face-to-face to follow.

We know even Dylan must take off his shades then,
And Whitman, self-conceived and undisguised and naked, offer a libation,
As he might have spilled a glass of dark beer at Pfaff’s.

The knickknacks in the old headshops whispered of these inevitabilities,
The incense rising past the cheap prayer flags, dusting the woven ponchos.
In the basement bookshop where you browsed, a spring binder tucked under one arm,

You begged me to remember how difficult it seemed when it was not difficult at all,
Not in hindsight, the traverse and then the knife-edge we climbed,
Carrying an empty bowl that begged to be broken.