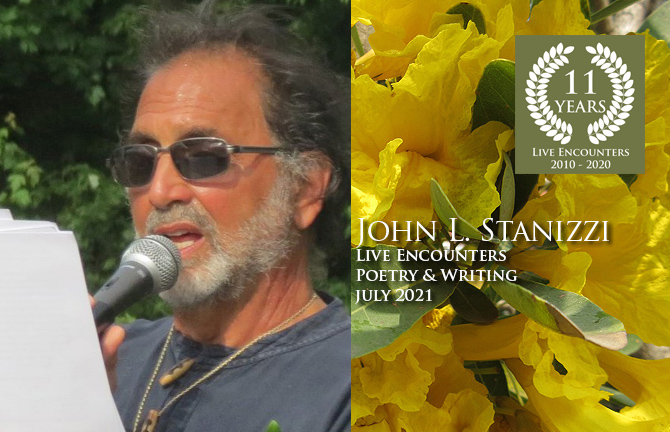 John L. Stanizzi is author of the collections Ecstasy Among Ghosts, Sleepwalking, Dance Against the Wall, After the Bell, Hallelujah Time!, High Tide – Ebb Tide, Four Bits, Chants, Sundowning, and POND.  John’s poems have been widely published and have appeared in Connecticut Review, Prairie Schooner, The Cortland Review, American Life in Poetry, Praxis, The New York Quarterly, Paterson Literary Review, The Laurel Review, The Caribbean Writer, Blue Mountain Review, Rust + Moth, Tar River, Poetlore, Rattle, Hawk & Handsaw, and many others.  His work has been translated into Italian and appears widely in Italy, including in El Ghibli, The Journal of Italian Translations Bonafini, Poetarium, and others.  His nonfiction has been published in Stone Coast Review, Ovunque Siamo, Adelaide, Scarlet Leaf, Literature and Belief, Evening Street, Praxis, and others.  John is the Flash Fiction Editor of Abstract Magazine TV, and he has read at venues all over New England, including the Mystic Arts Café, the Sunken Garden Poetry Festival, Hartford Stage, and many others.  For many years, John coordinated the Fresh Voices Poetry Competition for Young Poets at Hill-Stead Museum, Farmington, Connecticut.  He was also a “teaching artist” for the national poetry recitation contest, Poetry Out Loud; he spent a decade with Poetry Out Loud.   A former Wesleyan University Etherington Scholar, and New England Poet of the Year, John has just been awarded an Artist Fellowship in Creative Non-Fiction — 2021 from the Connecticut Office of the Arts for work on his new memoir.  He teaches literature at Manchester Community College in Manchester, Connecticut, and lives with his wife, Carol, in Coventry, CT. https://www.johnlstanizzi.com

As the coffee maker
gurgles and pops
the cats head-butt my shins
and the birds are already
lighting the landscape
with their intricate sparkles.


My wife is still asleep.
It is dark
though well across
the crepuscular hills
way over in Munson
the sun begins its low burn
all along the horizon,
as down in the valley
nestled in the trees
that cover the small mountains.
the Montrealer grumbles along the tracks
in the direction of its next stop
which, in thirty years, I’ve never learned,
too preoccupied with
the train’s clatter and engine rumble,
its singular voice pulled from the stack
and echoing up through the fog
into the new morning.


It is still dark
and she is not quite ready to rise,
though the cats are getting restless,
the light is changing.
And that’s when I hear
the sound of her waking;
she sighs one long sleepy sigh,
the sigh dawn makes
pulling its clear blanket
slowly over
what’s left of night.


Raelle and the apples

Every year the progression is the same.

The young apples begin to show,
no bigger than a golf ball,
stem end a little birthmark,
blossom end a flower
larger than the tiny apple.

Raelle looks up into the branches,
knows it’s still too early.

There is no chance of letting go here.
For now all is secure.

Are they moving in opposite directions
or the same-
summer dying,
apples growing.

It is the same direction, I suppose.

Nearly full-grown
they hang weighty on the branches now,
long, sweeping arcs
toward the earth,
each branch bejeweled
with heavy green gems.

Now so many apples litter the ground,
though it is rare for me to
witness these drops to earth.

It is as if someone has come in the night
and quietly placed apples
on the ground all around the tree.

And the apples still hanging
are bright red and just out of reach
of my granddaughter’s stretching arm,
though she seems to be growing
more quickly than this fruit.

I pull down an apple,
polish it on my shirt,
inspect it,
hand it to her.

And looking directly into my eyes
she performs the extraordinary-
smiling and biting at once,
the joy of no longer having to wait,
shining in her eyes.

-On the evening they professed their love for each other
-Austin wrote one word in his diary – “Rubicon.”

-My attempt to write in the style of Emily Dickinson.