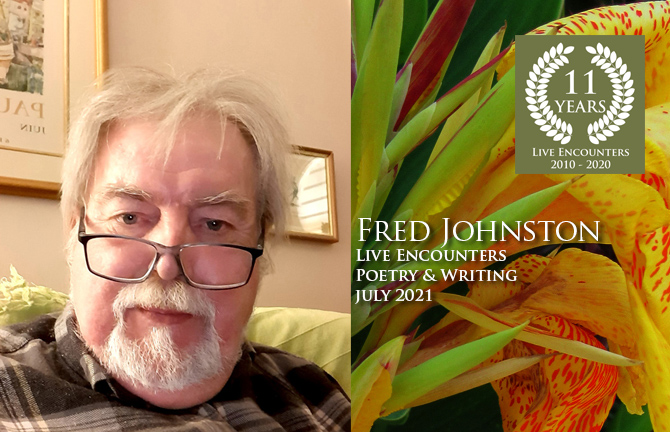 How her life changed earned two pages in a Sunday supplement
One morning she woke up to a mutilating headache and a sudden gift
For blank verse. After the years he’d put her through she had much
To say. And all her other travails.

The Tuesday evening poetry circle admired her work – what more
Could anyone ask? The house looked out on fair mountains, but more
Importantly it looked at her in a different way.

Impatient over his plot, she told him: This was what I was meant to
Be if I hadn’t met you. And look what you did, you just fucked off.
She’d never known him to read a book.

All he did was work. And build the house. As she’d told that pretty
Girl journalist, all men were useless. Immensely useless, like some
Uncrossable sea. A hindrance you drowned in.

She had wished to write about his prolonged going, the morphine
Months, the smell. He had become usable material and the engine of
Her resurrection. But a sense of decorum – was it? – had stayed her
Hand. She’d get back to him.

Outside the Eat-‘N’-Sea takeaway there’s a queue forming
All masked up like a line of Great War gassed and as silent
And fidgety as tongue or jaw cases, what shrapnel can do –

Odd to have thoughts like this outside a fish-and-chip shop
Perhaps it’s down to the groan of news bulletins and pictures
Of grey faces in rubble, the pixelated kids, a savaged wheelchair

In some way or other it all seeps in, sullies, as it’s meant to
The trimmed-hedge-and-roses cosmetic of our off-licence lives
The next call will be in for a brick of Polish beer, let’s be clear –

Let’s be very clear – isn’t that what the polished spokesmen
Say when the lie is rooting down, getting fired up to bloom like
A malignant – let’s coin a word – linguanoma? The queue shortens

Time to step out of the car, toss the fag-end, slip the mask loops
Over your ears. There’s a sea-salty breeze in your face and
A debit card loaded and cocked in your fingers and life is good.

In the Café Massoud

At the table facing the mirror in the Café Massoud
You can watch yourself eating;
The image is not comforting. The man glancing back at you
Eats sloppily and without interest: he could as well
Be eating a street stall sandwich.
He is curious, as if seeing you for the first time; two
Strangers, one might say, each taking the measure of the other.

The coffee in a tiny cup is midnight black. Or the black of tar.
Each man – the one before, and the one behind, glass – takes
A cube of sugar. Then another.
Creatures of petty ritual.
They rise together to pay the bill and, as might be expected,
One of them disappears. There are people like that.
Such events are not unique to the Café Massoud.


If you live long enough

The dogs give them trouble –
Muscular animals, they hang on the leash
The women step back,
Are pushed against a wall
Uniforms and dogs, nothing new

If you live long enough, it all
Comes round again, though it is forbidden
To think that. It was always forbidden
To take photographs
But always someone did

This is a narrow street, all such streets
Are narrow. Name any town:
Czausy. Ivye. Luninitz.
They had streets that suddenly
Were narrow and then were empty.

Women tug the young men out of harm’s
Way. The arrests come. One, two,
Not many. Not yet. To put the message
Across. It’s been thought out.
If you live long enough . . . .

The front door slams open in the wee hours
They come in mob-handed, screeching
Turning over tables, emptying wardrobes, scaring the kids
And somewhere along the street
Women shouting abuse as some young buck is taken away –

It’s the same mob, they’ve changed their shirts but
It’s the same people –
Some may shoot themselves or spend
Small fortunes on psychiatrists

But that comes later. They are not monsters.
They are neighbours’ kids, like those they abuse
They have favourite soccer teams and sweethearts
They have a parent who disapproves
One or two will write a book denouncing themselves

Some will be exonerated for juvenile excesses
Some will hang
It all depends, it all depends
Some would do it all again
Some will never sleep again, others never make love

Say a thousand one-leggéd young men in football jerseys
A bullet in the knee always means the loss
Of the whole limb, the loss of one eye leads
To the loss of the other
Say a thousand children watching their homes come down

Peace? What is that?
A joke? Say a hundred generationsful of remembering
Barbed-wire, checkpoints, a teenage soldier pushing a gun
In an old man’s face, your father’s face,
The slow rot the soul endures

Say whatever you like
Or, if you prefer, say nothing.