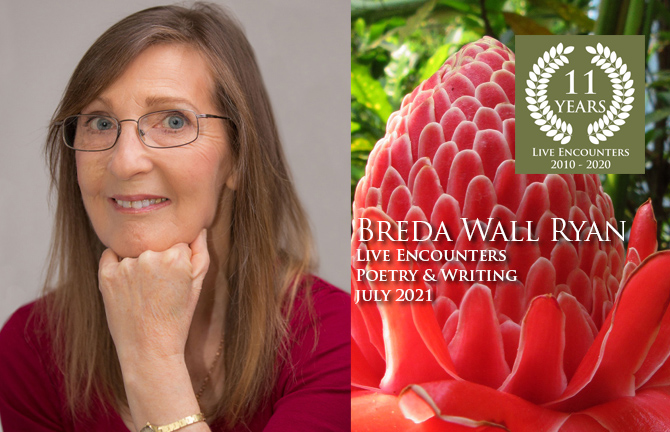 Breda Wall Ryan grew up in Co Waterford and now lives in Co. Wicklow. She studied at University College, Cork and Trinity College Dublin. Her awarded fiction has appeared in The Stinging Fly, The Faber Book of Best New Irish Short Stories 2006-7 and The New Hennessy Book of Irish Fiction. Her poems have been published in Skylight 47, Ink Sweat and Tears, Deep Water Literary Journal, And Other Poems, Fish Anthology, The Ofi Press, Orbis, Magma, The Rialto and Live Encounters Poetry & Writing. In 2013 Breda won the iYeats Poetry Contest, Poets Meet Painters, Dromineer Poetry Competition and Over the Edge New Writer of the Year. She was selected for Poetry Ireland Introductions Series, 2014 and was awarded Second Place in the Patrick Kavanagh Award, Third Prize in The Rialto/RSPB Nature Poetry Competition, was shortlisted for a Bridport Prize and Highly Commended in Fool for Poetry Chapbook Competition. Twice nominated for a Pushcart Prize, a Forward Prize and Best of the Net Award, she won the Gregory O’Donoghue International Poetry Competition, 2015. Her debut collection In a Hare’s Eye (Doire Press) won the Shine Strong Award 2016 for a first collection by an Irish poet. Doire Press also published her second collection, Raven Mothers, in 2018.

My lover and I are having
a friendly argument, the kind
of bickering we do if we’re bored
and it’s not yet time for tea.
He would like a field and three
or four Herdwick sheep to nibble
the grass. I want an electronic
sheep to wander at will, grazing,
its short blades solar powered,
so it wouldn’t need extra feed,
even in winter.

We switch on the TV News.
In Greenland, glaciers disappear.
Lakes form from meltwater
high in the Himalayas. Bushfires
rage in New South Wales
and Canberra. Somewhere else,
drought crazes parched earth.
Rents are out of control.
Used to this, we have grown
complacent, we live in an age
of famine, fire and rising seas.

Cocooned against catastrophe,
we binge-watch recorded shows:
Country File, Ear to the Ground,
The Yorkshire Dales and the Lakes.
We are first-generation city folk
with climbing rent and paved lawn.
‘Two Herdwicks might be nice’,
I say, and we agree: two, and a field.

Lumberjacks’ saws moaned
through two spotlit nights
from a crane on a flat-bed.
Now traffic drones
where winds played unchained.

When insomnia plagues my nights,
I tune out the urban noise
of engines that startle and grind,
conjure the murdered tree, invite
its lullaby in, leaf by silvered leaf.

Squeezed, the jellybag
yields a few last drops
that cloud the jars.
Wee lick sweet fingers,
save the pulp
time will break down
to compost to feed
next year’s fruit,
a new crop we’ll blet
in straw and darkness
to juicy sweetness.

when the music stopped,
I heard the rain snake
down the window pane
and looked beyond
to where heavy drops
beat ivy almost flat
against the dripping wall,
so heard the blackbird’s
warning call and
glimpsed her
clapping rain
off drenched wings,
then fold them flat,
and shuffle, furtive,
into a leafy cave
she must have hollowed
underneath the vines
to hide her nesting site.
While I was tuning out
Rodrigo’s liquid strings,
half-focussed on trivia
on my screen, what else
must I have missed?


All Maps are Useless

Forget cartography, calculate instead
the weight of light,

the heat of burnt-out stars,
the heft of time,

the space between love
and its perception.

for the river’s penetration.
Down by the lake

Silence assembles, snags
on a place outside experience.

A Walk in the Woods

I glimpse a sun-glint
on what might be a coin,
fish this steel cylinder
from among fallen leaves,

read ‘Winchester .243’
stamped on the rim,
trace a finger
along the steel, feel
how smooth,
designed to drive a hot projectile
through meat and bone.

A soft breath blown
across its empty neck
raises the high-pitched whistle
of a sika deer.


I stand in a hunter’s footprints,
scan shadows
spreading between trees.

I pocket as souvenir
the deer’s voice
trapped in steel.

The sun goes down.