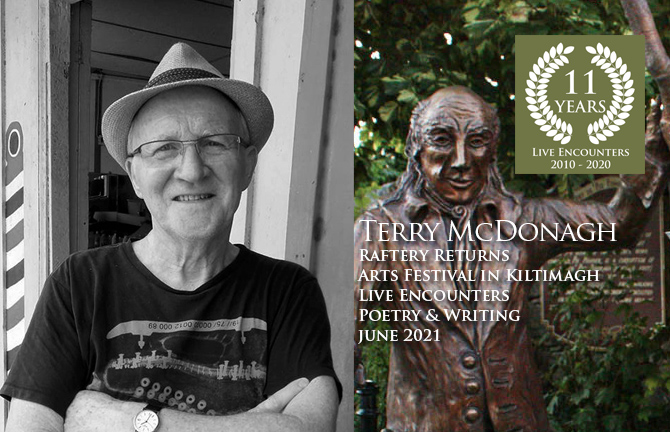 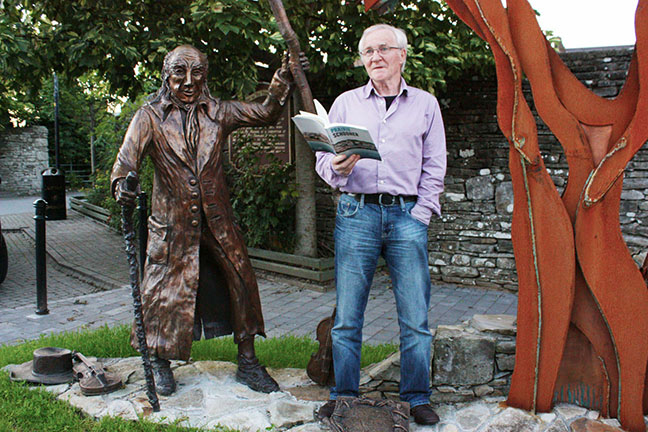 Terry McDonagh reading next to the sculpture by Sally McKenna of the blind poet, Anthony Raftery (1779-1835,) in the town square, Kiltimagh, where Terry grew up.

In the week, September 26th to October 3rd we will be celebrating the life and work of the blind poet, Anthony Raftery, of Cill Aodáin (Killedan), Kiltimagh. Previous generations kept the memory of the poet alive and now it’s our turn to honour his life and work. We will begin by symbolically returning him to his birthplace when a group of cyclists will travel the one hundred kilometres from Raftery’s grave to Cill Aodáin, Kiltimagh where he will be paraded through the streets in style.

Visitors will be welcomed and treated to a whole week of events that include creative writing workshops in English and Irish. Readings with writers Colette Nic Aodha, Gabriel Fitzmaurice, Ger Reidy, Terry McDonagh and others. Tertulia bookshop will provide us with a pop-up bookshop for the week. Publisher Alan Hayes of Arlen House will talk about publishing. There will be open-mic sessions and a poetry competition with a first prize of Euro 500-00. In addition, the winning poem will be unveiled, as part of a poetry trail, on March 30th 2022 (Raftery’s birthday). There will something for everyone: talks, music in pubs, a concert with Sean Keane, creative writing in schools, theatre and a literary walk through the townland of Cill Aodáin.

Anthony Raftery, the last of the travelling bards in Ireland, was born in 1779 in Cill Aodáin, Kiltimagh, County Mayo, and died on Christmas Eve 1835 in Killeeneen, County Galway, where he is buried. The story goes that he left Cill Aodáin in a hurry after an altercation with his patron and mentor, the landlord, Frank Taaffe. Although he’d always longed to return, he never did. In one of his most well-known poems, Cill Aodáin, he gives expression to his longing.


Killedan is the place
where everything grows.
There are blackberries and raspberries
and all kinds of fruit there.
If only I could only be standing
among my own people,
age would disappear from me
and I’d be young again.


Raftery is special in the legends and lore that surround his unconventional life and work. It’s reported that he died on a wild and windy Christmas Eve and was buried at midnight in the tiny graveyard of Killeeneen. Witnesses related that an old woman lit a candle to show the way and, even though the night was wild, the candle refused to go out. “It could not be quenched”.

But the story of Raftery only really took off about 1900 when Lady Gregory, a cultured, County Galway, Anglo Irish woman of wealth and influence, heard two old women arguing about the greatest poet and storyteller in the area. Although he’d already been dead for about forty years, one of the women argued, vehemently, in favour of Raftery – his ability in storytelling, fiddle playing and poetry was special. She talked about his talent with words and his gift of being able to memorize his own work. He would travel the roads and always be welcomed by rich and poor alike. The historian, James Hardiman, said Raftery played the fiddle tolerably.

Lady Gregory became fascinated and began her research. She, with the support of WB Yeats, Edward Martin and people from the area, saw to it that his grave got a headstone. With her friend, Doctor Douglas Hyde (future first President of Ireland) she became a driving force behind the revival of the life and works of the bard. Hyde compiled a collection of Raftery’s song and poetry. Research took them to Raftery’s birthplace in Cill Aodáin (Killedan) – their intention being to get to know and understand more about the poet’s background. They were to learn that he’d become blind when nine of his siblings lost their lives, and he his sight, when smallpox ravaged through the area.

By the early 20th century, the landlord Taaffe had been succeeded by the very literary and influential McManus family who, aided by my great grandfather, Thady Conlon, began a Raftery regeneration. Thady, an Irish language speaker and teacher, had translated one of Raftery’s best-known poems, Cill Aodáin, into English for the McManus family. It was the time of the Irish literary renaissance and the old stories and traditions began to play a very important role. WB Yeats, Lady Gregory, Edward Martin and others founded the Abbey Theatre as a State Theatre in Dublin with the intention of promoting new Irish work as well as giving voice to all that was of significance in the Irish cultural tradition.

Thanks to The Western Development Commission and our main sponsor, Spot-lit – a Europe-wide promoter of literary tourism – it has been possible for us to, symbolically, return Raftery to his birthplace in Cill Aodáin, Kiltimagh and to present a really interesting and exciting programme. In addition we are grateful to Kiltimagh Tourism for continued support. We are delighted to have been able to establish relations with other participants in the SpotLit literary tourism programme, such as Cáirde Sligo Arts Festival, Tertulia bookshop in Westport, Artisan House Letterfrack and Kiltartan Museum and Thoor Ballylee in County Galway.

We look forward to welcoming lots of visitors to the festival. It’s a fresh start to be continued long into the future.