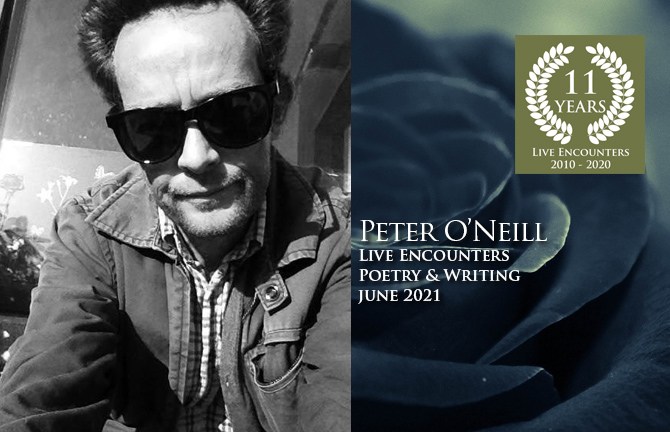 Peter O’Neill is the author of six collections of poetry, most recently Henry Street Arcade a bilingual edition, his first, with translations into French by Yan Kouton published by Éditions du Pont de l’Europe, 2021. He has also published a book of translations The Enemy -Transversions from Charles Baudelaire  ( Lapwing, 2015) and the hybrid prose work More Micks than Dicks – a satirical dig at the current world of Beckett Studies ( Famous Seamus, 2017). Having edited two anthologies of contemporary poetry – The Gladstone Readings and And Agamemnon Dead– he has just finished curating Baudelaire 200 Years! an online festival for the Alliance Francaise and a new book, again inspired by Baudelaire, Ideals and Spleen is due out in July. His poems have been translated into French, Italian, German, Spanish and Arabic.

I am reminded of the violence of the Rose,
When I see you sitting cross-legged on a park bench,
Dressed in your summer dress
With the floral patterns tattooed across both breasts.

And your two lithe and voluptuous limbs
Conceal the pale whitened barbs of your silken skin,
While the twin pools of your darkened eyes
Consume my sense of self; such is my demise.

Everything about you comes in pairs!
Balancing precariously by your sides,
Your two empty hands sharp as shears.

And as the thorns of some dark rose, they’d rip
The skin off any part of a merely mortal man.
She then conspiring to une fleur du mal.

Eve signalled by the apple which she holds
Of course in her left hand held behind her back,
Smiling up at the heavens like one of the justifiably Damned,
Crowned with Laurel and bearing a quill in her right hand.

Wearing only a pair of stiletto,
Her stage then a book with a great R printed behind her;
Rombaldi, Éditeur, 184, Boulevard Saint-German, Paris.
The title of the book Les Fleurs Du Mal.

The year of issue 1935 printed on the spine.
So, Eve witnesses the fall of the Third Reich.
You picked it up in an antiquarian bookseller in

What about those other stories that books secretly tell,
Those unbound stories which know no ink nor author,
But rather eminate from the pages through signs
Other than those of words, written instead in wine stains

On the discoloured pages of  summer holidays
Baking in the Meditteranean Sun; those same pages,
Sea- soaked, and whose sheets are forever shaped
By sea- water and the sun of a certain High Summer?

Who is their author, thoese stories told in other
Languages and fashioned from other senses other than
Than those abetted by both ears and tongue?

There, dear reader, open the pages and bend right in,
Inhale the scent of the O so gently baked paper and smell
The gentle aroma of pines which have long since faded upon the shores.