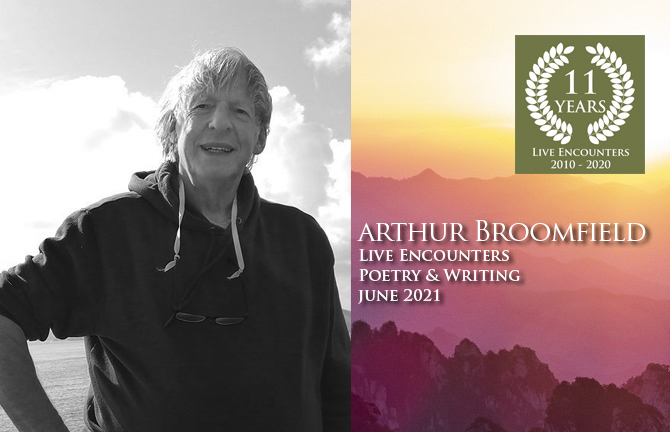 Dr Arthur Broomfield is a poet and short storywriter, Beckett scholar and occasional lecturer from Ballyfin County Laois. He is the author of seven books including three poetry collections The Poetry Reading at Semple Stadium [  Lapwing 2012] Cold Coffee at Emo Court [Revival 2016]  The Giants’ Footsteps at the Rock of Dunamaise [Revival 2019] and a study on the works of Samuel Beckett :The Empty Too : language and philosophy in the works of Samuel Beckett [Cambridge Scholars’ Publishing  2014]. He  delivers poetry and short story workshops and is available to mentor writing groups or individual writers and to give lectures on the works of Samuel Beckett and on Surrealist poetry. Dr Broomfield holds BA degrees in English and history from NUI Maynooth, an MA degree in English literature [NUI Maynooth] and a Ph.D in English literature from Mary Immaculate College, University of Limerick.

Today I want to thrash those dandelions,
the colonising buttercups, glaring at me,
the ironic beauty of the milk thistle.

I won’t dig the dun earth
with my heavy-duty mattock
or disturb the sad soil
with the spade bought for the event.

listen to the double bass coo coos
of the Woodquest,
the dirge from the rookery,
and carve your name on the flagstone
where you used to lie on hot days.

I’ll sanctify the spot
with scents from our walks,
sip sparkling water
and wait for the dawn chorus,
the morning star.

The meeting on the Turret Stairs

After Hellelil and Hildebrand the meeting on the turret stairs,
Frederic William Burton. The National Gallery of Ireland.

In another time, when this is a theme park
or the dredged remnant
of an orange grove,
or the Mars office of the New York
stock exchange,

a couple will surmise,
as they stroll home in
a dewy twilight, a cyber rose
clasped in her hand,
that here had been a coffee shop, once.

He might say, those two used to meet here,
regular like, you know?
Oh! she may say,
listening for the hiss of steam
from the Costa Express
drift across the ethereal,
I can smell the cappuccino,
it must have been something special.

The Meeting on the Turret Stairs 2

She who has touched him –
rid of chain mail and helmet,
sword in repose –
he would, he planned,
touch,

here, beyond the curve in the stairs
where her hair caresses the stars,

he would tell her things in words
forbidden to a knight
in armour,
kiss her, as the poet
would kiss the muse
and name her Erato,
here and hereafter.