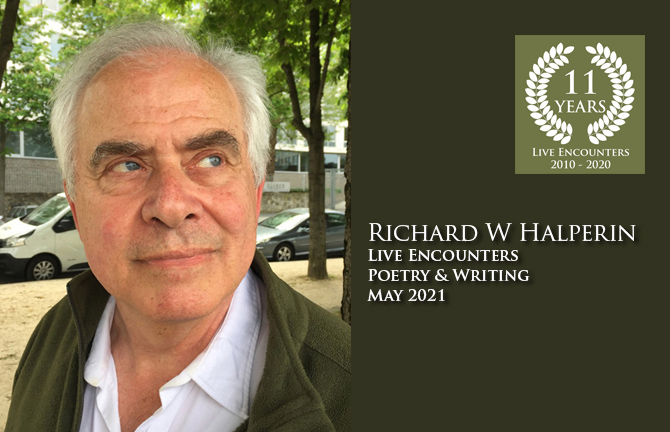 Richard W. Halperin holds Irish-U.S. nationality and lives in Paris. Since 2006, he has seen over 450 of his poems published in literary magazines, mainly in Ireland and the U.K, with an especially large number taken by Cyphers and, until it closed, THE SHOp. Since 2010, he has published four collections via Salmon Poetry. The most recent is Catch Me While You Have the Light, 2018. In complement, since 2014, he has published thirteen shorter collections via Lapwing, Belfast. The most recent is Richard Dalloway in Wisconsin: Two Poem Sequences. The second sequence, A Country I Remember Fresh as Morning, is dedicated to the peace educator Betty A. Reardon.

My cat looks at me.

Whatever he is thinking
It is never that.

We both get to the next minute
In parallel

The name for the full moon in February.
First used in Maine, where snowfalls are heavy.
Language, though, is alive, cannot be confined
Even by the good people of Maine.

For me, snow moon is the full moon in any month,
Pure as driven. White is not necessarily something
To be emulated. The dead turn white, for example.
I prefer luminous.

Garbo, after retirement, received an honorary Oscar
For her ‘luminous performances.’ It could as well
Have gone to moon phases. Snow moon.
Soon gone. Never gone. Eventual resurrection.

The Book of Kells is also snow moon. The colours
Mask it, as did the paint on ancient Greek temples.
Snow moon. When I say the two words, mountains,
Valleys, libraries, I myself, drop sheer away.

With schoolmates. With teachers.
Where are they now, those conversations?
Not about literature or science,
Although that’s what we thought they were about.

Conversations about ourselves only,
About how intelligent we all were being.
Passionate opinions,
Most of which subsequent tragedy burnt entirely away.

Conversations which continued on without us
Through inter-stellar space.
To be eaten by angels maybe,
As the resurrected Jesus ate that grilled fish

‘What he could do he did,’
Virginia Woolf writes.

About the moth
In ‘The Death of the Moth.’

And I, as my life nears its close?
I have not done what I could.
Do is a terrifying verb.
The responsibility.

Be is the verb for me:
Be I cannot help. 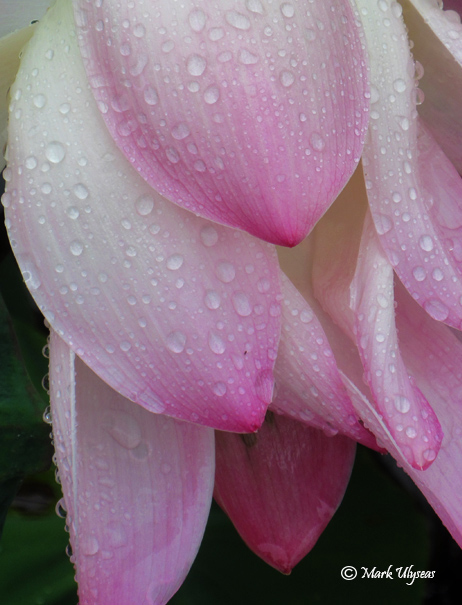 Lotus washed by the rain. Photograph by Mark Ulyseas.