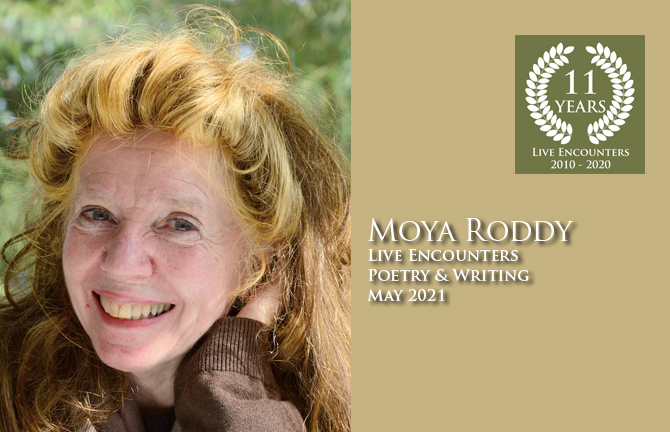 Moya  Roddy’s debut collection Out of the Ordinary (Salmon 2018) was shortlisted for the Strong/Shine Award. Poet Jessica Traynor described it in North Magazine as a “… book of minute observations … sudden seismic epiphanies” Her poetry was also shortlisted for the Hennessy Award. She’s published a collection of short stories Other People and two novels A Wiser Girl (Dec 2020) and The Long Way Home described in the Irish Times as “simply brilliant”. A new collection of short stories Fire in my Head is due for publishing in September and her second collection of poetry shortly afterwards. She also writes for radio, television and film. Moya facilitates Meditation every Sunday at Brigit’s Garden in Galway, Ireland.

You were everything
I never wanted to be
you were hanging out washing
sweeping floors and making beds
you grew fat then thin producing babies
as if they were going out of fashion
you were saggy breasts and varicose veins
giver and withholder
you were everywhere
you were in the way
an insoluble object I had to overcome
you were court shoes and slippers
double meanings and mixed messages
go-between and in-between
placater and protector
the patience of a saint
you were for making the best of it
finding the good in everything
keeping your voice down
you were ill health and doctor’s orders
heart racing and palpitations
waiting rooms and hospital beds
getting sick and being sick
you wrote letters to your own mother saying
I don’t think my daughter loves me
you were a keeper of lore
apples for moisture
salt in burnt saucepans
coal among lettuce leaves
you made rhubarb pies and gur cake
blackberry jam and crab apple jelly
you made things last
you read stories with morals
Pinocchio, Wizard of Oz
danced the Charleston
your elastic stockings slipping
loved Nescafe and Fox’s Glacier Mints
you cleaned up shit and puke
wiped dirty noses
buried your youngest son
you delivered the Sacred Heart Messenger
with its lurid red cover
put egg white round your eyes to stop wrinkles
had a beautiful voice
you loved flowers and gardening
looked beautiful in your grosgrain suit
and once when you unbuttoned your blouse
sat on the back step to sunbathe
you were sexual
you were Brown Scapulars and novenas
collected rosary beads memoriam cards
went to Mass every day
trusting in God and goodness
it didn’t stop us fighting
me attacking you deflecting
slow attrition
you loved your sons more than your daughters
had your own version of re-incarnation
hoping to come back as a snake or a flower.
I don’t think I ever thought of you as a person.
Mammy, I hardly knew you.

The back almost finished, you notice
dropped stitches several rows down,
others threatening to slip their moorings.
Nothing to do but unravel, slowing
as you get closer to the giveaway line;
then the painstaking job of getting
stitches back on needles, one by one,
plain and pearl twisting in opposite
directions. Using the crinkled wool
you begin replicating what’s been ripped:
a phantom piece of knitting hovering –
like a memory you can’t put a finger on.

When the call comes there isn’t time
to search the net for bargains,
it’s dash to the airport, grab
the first available seat –
and even though the plane’s travelling
hundreds of knots an hour
my heart outpaces it, each cell in my body
willing it on, assuring me you won’t die
while I’m in flight, will wait – as you
always waited – ’til I get home.
I can see you at the top of the stairs:
What time do you call this, Missie!


Hurry, I urge the taxi driver. When he
pulls up outside the hospital I jump out,
blunder through revolving doors,
race along corridors, your image looming large:
only to find you shrunk, childlike
in your bed; asleep or in a coma the nurse
can’t say: Speak to him, they sometimes hear.

Embarrassed, I whisper Kojac in your ear –
your favourite TV show. As I stoop and kiss
your gravelly cheek a smile appears. Go and
have a cuppa, the nurse advises. I do as I’m
told – return to find you’ve slipped away.

The journey back feels endless, one thought
circling: had I missed the flight or the taxi
broken down would you have lived longer?
Or like the ratio of wingspan to fuselage
—a precise equation of length to breadth—
which keeps the plane airborne: is each lifetime
so many breaths, so many breaths and then
no more.

Barely in the place a wet Sunday when
they painted it a jaw-dropping turquoise;
not only the house but the walls surrounding
the house, the lean-to at the gable end.
The locality saw red – who did they think
they were painting a house that colour,
showing no respect for the countryside
or those living in it – a complete eyesore –
blow-ins wouldn’t you know and that house white
for as long as anyone could remember.
What was wrong with white – if they
didn’t like it weren’t there forty shades
of cream to choose from? People muttered
behind their backs, crying blue murder;
but gradually they found something else
to talk about and the strangers turned out to be
just like themselves, sending their kids
to school, shopping at Supervalu.


That seemed to be that until one day
the front door of a neighbouring house
was painted a screaming magenta; an old
outhouse turned yellow and in jigtime
the whole townland was a rainbow; regulars
at the pub saying what’s the harm,
it spiced things up, added a bit of colour;
pity no one thought of it sooner.

After a couple of glasses we end up
in the garden, debating whether
the hedgehog we’ve chanced upon
is alive or dead. There’s a curious
cast to its eyes – open but unseeing.
It could be hibernating, I venture;
puzzling over your perfume –
musk, I decide, a whiff of predator.


As we chatter idly above the possibly
lifeless creature, I wonder if there
isn’t more to Schrodinger – if being
alive and dead at the same time
isn’t our default position.

A question of luck

The electricity goes and I curse, fumble for
matches. Locating a box, I strike one after
another in a search for candles; chance upon
a couple of stubs at the back of a drawer.
I should have paid attention to the warnings,
I berate myself: I could have got some in,
re-charged my phone—

I catch myself on! All we’re getting is the tail
end of a storm. On the other side of the world:
mudslides, floods, contaminated water. People
dying or displaced. Homes reduced to matchsticks.